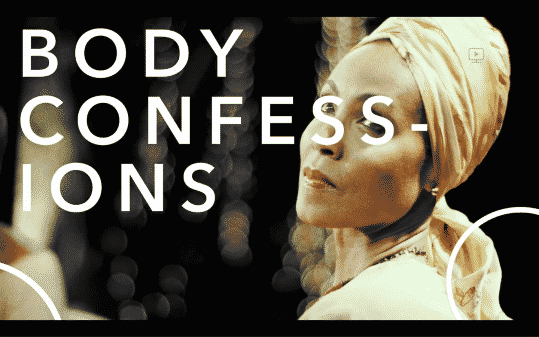 In this episode, the ladies of the Red Table confess not just their insecurities about their bodies, but also talk about what they love about theirs and each other.

When it comes to Ms. Adrienne, with her being a woman of a certain age, and media bombarding her with things about being and looking youthful, that brings some insecurities. Not because she looks at her face or anything and takes note of that, but more so her thighs. As we see with Willow and Jada, being a thin woman runs in the family and with cellulite and despite her working out as she does, she still feels big. Well, bigger than what she is accustomed to.

But, as it talked about when Willow speaks about her insecurities, a lot of the stuff you are kind of “meh” about others like. For example, Jada likes this meatier mom and Willow thinks she has a nice bottom. Which, of course, doesn’t necessarily change how she feels, because her husband too likes the extra weight and how it looks on her, but the compliments, alongside complimenting her lips and hair, are noted.

Perhaps the driving point of this episode is that insecurities manifest no matter who you are. Ms. Adrienne could pass for Jada’s older sister and you wouldn’t know until you Googled her. Yet, it is strongly pushed that compliments, direct or underhanded, don’t necessarily change the situation. For, especially when you’re aging and the elasticity of your body isn’t the same, or weight, you can always look back, or be reminded, how you once looked. Which is one thing when you’re Willow’s age and the excuse of being a child or before puberty can be thrown in there. But when you’re older, it is a totally different story.

And mind you, the Smiths are a pretty fit family. They all look like they are filming an action movie which is halfway through production. But, that doesn’t mean that they see themselves as perfect. People may think they look perfect, for their age or whatever, but it’s one thing to look at someone and to be that person.

As you can imagine, being a young girl growing up in the Instagram age has sometimes been hard on Willow. She is a thin girl and with her seeing curvier girls often attract and date the guys she like, it sort of pushes the idea she is just seen like a little sister. Add in Will talking about, because she is thin that guys will analyze her thoughts more than her body and, well it presents the idea she isn’t seen in a sexual manner.

Which, isn’t a huge deal for Willow is on a path to accepting herself as a whole, not just her body. Yet, it does bug her. For, like with Adrienne, while there might be those, like her mom, who tell her how beautiful she is, sometimes you need someone you have a physical attraction to, to say that. For that is the validation, and appreciation, you’re really looking for.

But, it isn’t just Willow’s frame but hair brought up. With her not having her mom’s hair texture, nor Jaden’s, that is why her style has been a bit all over the place. Since that was part of her journey to accepting herself. Which, as noted in the past, Jada supported because she wanted Willow to feel she had autonomy over herself. Hence why she doesn’t even get on Willow about her underarm hair. Adrienne doesn’t get it, because she’s old school, but Jada is a bit more hands off.

One of the beautiful things about Willow being part of this is because, when it comes to Will and Jada, understanding how they parent has always been a bit of a mystery. They have these two highly visible, carefree and Black kids. Something that, I’m sure, a lot of Black folks, and people of color in general, want to have. Kids who, for the most part, are comfortable with who they are, their look, and seem sure of themselves.

Something that, with how Jada talks to Willow, it is like a parenting book being given to you page by page. You know, like an Amazon preview. All the while you have Ms. Adrienne who presents a sort of old school, more traditional way, for the sake of compare and contrast. Making it where you can overanalyze the relationships and understand how, experiencing what Jada likely did from her mom, how that influenced her changing how things would be done with Willow.

Thus pushing the idea that, patterns can be broken if you put the effort into it. Which isn’t to imply there are negative patterns a foot, but more so multiple ways to raise a person to a successful and actualized adult.

Like Willow and Adrienne, Jada has had body insecurities. With her being about 5 feet and thin, she was, as her mom puts it, like a string bean at times. Which, over the years, has led Jada to do a lot of different transformations to find what fit her. Be it more muscular, soft, like a straight line, you name it. Though, at this point in her life, it is her hair which gets the most attention from her since she has begun to lose it.

Not of any fault of her own or any clear-cut medical reason, though alopecia is named as a possible factor. Albeit in a way in which doesn’t make it sound like a medical professional confirmed it but instead “people (Note: during the live Q&A she confirms it).” Either way, the natural, wavy hair we are used to seeing, which has been all hers, by the way, is just coming out. Something which, of course like any person used to having length, freaked her out a bit. However, taking note of all the things a higher power could have taken from her such as her actual health, her kids, and etc, the hair doesn’t seem like such a big deal so she is fine with it.

Jada noting that, of all things a higher power could and will take away, her hair being it, really puts a lot in perspective. Including the larger topic of everyone at the table being insecure about not being on a more curvier side, at one point in their life. Because we all have something we’re insecure about, which I’m sure others may wish they could have. Yet, taking note of our insecurities, there is always this thought of, when it comes to certain things, you can find a way to make it work for you.

Jada was losing her hair so she started using turbans which brought her the sense of having a new crown, while also just changing her style up. In terms of being thin, Jada would go muscular, do certain exercises to get what she can, until she found a routine which worked for her. It’s all about doing what you can with what you got for you don’t know how long you’ll be privileged with what you have. Be it your hair, your body, or ultimately your life.