Jada continues to demystify herself and her family as she works through her old ways of thinking head on. This time with Leah Remini.

Just to catch everyone up, for most of her life, Leah Remini was a Scientologist – even before the fame she had now. Within Scientology, per Leah, you are indoctrinated to present some form of perfection at all times, or risk interrogation, isolation, maybe even punishment. Especially if you critic the church for that means having to use the “Fair Game” technique of laughing off a criticism and discrediting the critic.

Hence the issue at hand for Jada and Leah for Leah introduced Jada to Scientology and was of the mindset she was in it all this time. So when she mentioned Jada in her book, that set off some issues. Then, when Jada mentioned what was said in the book on Watch What Happens Live, that increased the chasm for Leah thought Jada was using “Fair Game” on her.

But, years later, thanks to Duane Martin, who seems to be a very integral part of Jada and Will’s life, Leah and Jada come to the Red Table to discuss their sides of the same story. 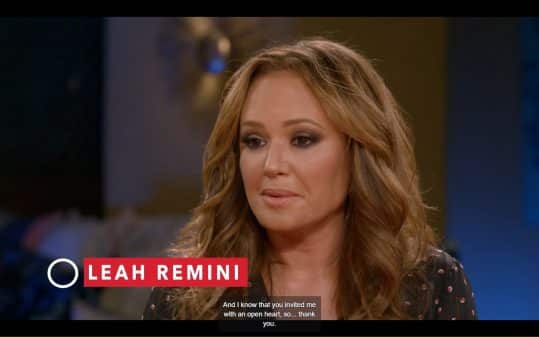 Leah Remini: And I know that you invited me with an open heart, so… thank you.

I say this in the nicest way possible, will a good portion of this show be about Jada dealing with beefs and misconceptions about her and/or Will? I’m just saying. Not that there is anything wrong with that, for why shouldn’t she profit the same way TMZ and late night hosts do off things she is dealing with, right? Especially if she is profiting by addressing and squashing an issue, and exhibiting how others can handle their disagreements as well.

As noted, Leah grew up in the church and similar to Jehovah’s Witnesses, Scientology is very restrictive. So while it is always welcoming to new members, it also not something you can go into halfway. So, for Leah, the issue is that, what she knew of Jada, she saw someone who was likely committed to Scientology. After all, she and Will were at Tom Cruise’s wedding, did the “Fair Game” process, and even opened a school using Scientology teachings.

So, when Leah broke out, her name-dropping the Smith family was because she was hurt and wanted to expose anyone and everyone who had even a minuscule part of her pain. For, since she was a child, she felt unprotected so lashing out like that was part of her defensive mechanism. Leah even notes, in the boardroom, she is confrontational like that because, formerly, that is what worked for her. Yes, it lost her a few gigs, but made it feel like someone had her back and, as always, that someone was Leah Remini.

Now, for Jada, being that her grandmother raised her to be curious, especially with religion, and pushed her to study what works for her, that is why she invested into Scientology. She isn’t one now, for reasons not elaborated on too much, but her issue was the one she always has had – being misrepresented and someone trying to define her. After all, Jada had enough of that at home with trying to please Will so, outside the marriage, she had no reason to let someone she was cool with try to label and define her. Especially in such a way to make it seem like she was a liar.

However, with Leah presenting the idea she was just using the book to deal with things and because she was missing information she said certain things, she is forgiven. After all, the way Leah Remini is often talked about and shown is a straight shooter. Something which is appreciated by most people since you can usually tell where they are coming from. So, in Hollywood, a friend like her is priceless. Hence why, when Duane spoke about Leah wanting to reach out, Jada jumped at the opportunity and thus they sat at the red table. 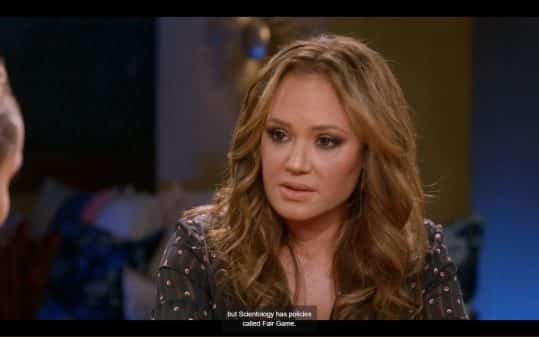 I want you to think about this: Because Will and Jada went to Tom Cruise’s wedding, because they, with their kids, played hide and seek, also because Jada decided to read up on the religion, partner with them to start a school, they were considered to be branded. Which, because Leah Remini is a celebrity in her own right, her saying Will and Jada were Scientologist brought a certain validity that anonymous sources do not. So, of course, there was beef.

Yet, let’s be real, opening a school using the teachings of Scientology is the kind of thing you’d expect a Scientologist to do. It’s hard to imagine anyone putting their money down, or being associated with a school, a pseudo-religious one at that, unless you were personally connected with it.

And from the outside in, could you blame Leah’s assumption? Yes, considering the conversation they have at the red table, she could have just asked. Yet, with how Leah makes it seem celebrities were exalted and critiques led to you being interrogated like a terrorist, can you blame her for not wanting to approach Jada? Especially since everyone seemed to be snitches and were presenting a false identity?

Not to forget, while Leah is famous, she isn’t a Tom Cruise or Smith level famous. So her confronting Jada could have led to a smile in her face and a bunch of BS for what she knows. Especially considering, just for mentioning Shelly Miscavige, David Miscavige’s wife, she seemingly was imprisoned for three months in Florida. Imagine the backlash if Jada and Will, combined with Tom, decided they, among others, would blackball Leah. Combining their star power, which creates billions in the industry, to work against her. She couldn’t afford that.

Pressing Play After The Friendship Was On Pause: Leah, Jada

With the Scientology misunderstanding handled, the focus becomes the friendship. After hitting pause on it for years, they catch up. Leah mentions the difficulties of learning to be vulnerable after the upbringing she has had and Jada relates heavily. Especially since they have kids and ones who expect affection from their close relationships.

Also, they speak further on their own rage which stems from their fathers being absent as well as lacking the feeling someone is steady in their corner. Hence the aforementioned way Leah would act in boardrooms and Jada having to adjust how she handled the men in her life. Not just in business but Will and her sons. Making it seem, sort of how the proverbial guy fights with his best friend and that immediately squashes the issue, as soon as these two revealed their sides to the same story, it was over and they could pick up where they left off. 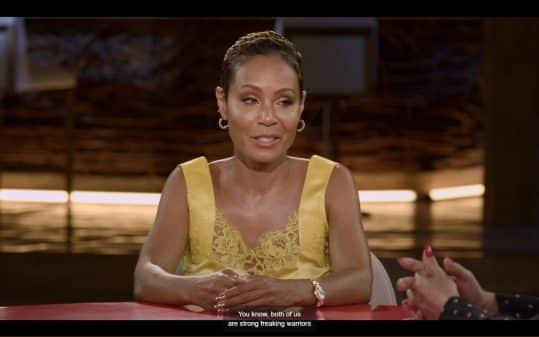 Jada: You know, both of us are strong freaking warriors.

With the way celebrity beef is, be it Katt Williams and a whole lot of comedians, Nicki Minaj, and Cardi B, among others, it isn’t hard to understand why some would love this show to be 5 days a week. What Jada and her family bring may remind you of Iyanla Vanzant’s “Fix My Life” but is less confrontational. It has the vibe of Oprah’s talk show but has a certain realness and edge that Oprah leaned toward, but couldn’t get down and dirty in. Thus giving this show its own lane between what could be seen as two extremes.

One which talks about issues and confrontations, frankly, yet with heart. For, thus far, no one has stormed away from the red table and even when things have gotten awkward for Willow or Adrienne, they were never pushed. They were allowed to be still and rejoin the conversation when they were ready. Because the heart of Red Table Talk is in the name. Talking, amongst friends and sometimes acquaintances, either to heal or share your healing. Maybe even, now that you have matured, revisit a friendship which meant something to you and see if forgiveness is on the table.

My therapist, she said, “You’re missing something. You just need to find out what you’re missing.” Just in those moments, just ask yourself or ask the person that’s saying these things or antagonizing you, “I’m sorry, what are we missing here? What do you think I don’t understand?”
— Leah