Adrienne and R&B artist August Alsina delve into their experiences with drug addiction and how they found a way to become clean.

For each person, it is made clear their addictions began to cope with either a physical or mental pain. For Ashley and Adrienne, it was mental and emotional. When it comes to Ashley, Will’s sister, it came from dealing with her mom passing and trying to numb herself. That is why she smoked so much weed and it eventually became her go to for dealing with stuff. In a way, that same goes for Adrienne.

As has been made clear, Adrienne has gone through quite a bit to become the woman we see at the red table. She was an unhappy teen who, partly from her upbringing, was very insecure and never truly comfortable in her skin. So, to help deal with that and to fit in, she started smoking cigarettes at 15, that led to drinking, reefer, and eventually heroin.

In terms of August? Well, due to him falling off a stage, that began his relationship with Percocet. Which didn’t seem like a problem at first because it was coming for a doctor. However, as with the rest who sit at the table, another issue is that they didn’t see themselves as addicts the way they were familiar with. Be it the crack head pawning everything or an example they saw in media or their families, it didn’t click so they weren’t it. 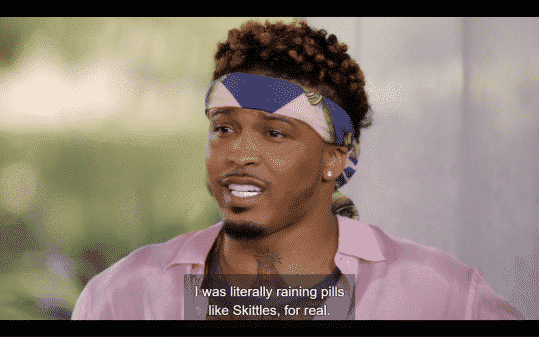 August Alsina: I was literally raining pills like Skittles, for real.

When it comes to representation, it isn’t just about seeing yourself in fictional characters but also real-life human beings as well. Especially the kind who still have some sort of realness about them. The kind who don’t see to have formed a sort of bubble to shield themselves from the outside world so now the public, and that person, seem almost alien to one another.

Which is the benefit of the red table and also what Jada, Will, and those they associate with means so much. For while Jada and Will are a bit unorthodox, and surely some of the stuff they do comes from them now being financially privileged, there is something about their journey which makes it where it doesn’t make it seem they became foreign. If anything, because they got out of poverty and found a way to remain who they were, they found ways to evolve that person. The boy from Philly or girl from Baltimore, into a mature and grown version of that person.

Making it where, a lot of the troubles they had, they may not have found perfect solutions but ways to make it so certain things didn’t repeat. And not by finding new vices or, in terms of child-rearing, whipping their kids and threatening them. It was by being open, sharing their discoveries, yet maintaining this means of communication where they are talking with you and not at you. They are not a lecturer but an aunt, uncle, or cousin who you may not see often, but when you do it is always meaningful.

Such is the case in how each person’s addiction began for unfortunately most never really know until they are knee deep. So just being aware of the signs, as Jada puts out there with her points, could help. For an ounce of prevention is worth a ton of cure and facing the root head on is what will keep something from infecting your life.

Hitting rock bottom is how most describe the moment before they sought help. For August and Adrienne, rock bottom for them came in a slightly different form than what you often hear. They weren’t dead broke, homeless, and how bottoming out is usually portrayed. When it comes to August, his bottoming out came in the form of Jada calling him sounding worried and bawling. Leading to his thought of, “[…] if someone else can love you that much that it hurts them, why doesn’t it bother you that you’re actually hurting yourself?”

In terms of Adrienne, her bottom dealt with one of the things which got her addicted in the first place: Her insecurity. This fear of not being with a man, not being desired, that seemingly is what started her 6-year journey to becoming clean.

As for Ashley? Well, as much as weed is downplayed, it still is addicting. It provides escape and for Ashley, the fear became her being high when an opportunity came and her not being able to come back down. For weed was her means of avoiding feeling something. And being that she has media aspirations, not being capable of feeling fully is a problem.

Leaving Jada. With Jada, she also is a peculiar one. If only because she explains how her addictions are sort of a binge then she stops. Sort of like how Willow talked about her addiction to cutting, once a problem is identified it seems, for them both, they just cut themselves off from it. Jada’s issue though was she would find something else but now it seems she has a handle on things. 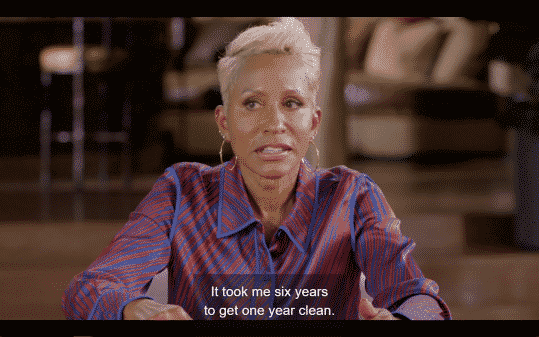 Adrienne: It took me six years to get one year clean.

One thing you have to love this show addressing is stereotypes about addiction and how they aren’t a catch-all. You can be a functioning addict. Someone who is highly dependent on something yet still able to function. But, there may come a point where you don’t find life manageable and just because it may not look like the struggle you are used to, doesn’t mean you don’t have a problem. It just means the same way you coped through your own particular way, you will also bottom out in your own particular way.

But what matters is you recognizing the problem, taking note it isn’t just some vice to keep the edge off, but is something truly negatively affecting you and possibly others. Maybe not even possibly, but likely.

Leading to the final thing that needs to be asked, how do you not only stop but don’t relapse? Well, the first part is asking for help if not accepting it when offered. August decided to go cold turkey and Jada checked up on him to make sure he was alright. As for Adrienne, she got help to get clean since going cold turkey wasn’t an option for her. While August, Jada, and seemingly Willow have that ability to just stop, that wasn’t the case for her. Something that, she points out isn’t a normal or average thing to do. Especially with August making it seem you just have to make the decision to stop.

For, with Adrienne well into 20 years clean, compared to August who maybe a year or two, she feels there is a need to address the things he just doesn’t know or have experience yet. Because she was able to go for months at a time being clean and then relapsed. So, while by no means saying August would, for the sake of the conversation, and the audience, she wants it to be clear going turkey and just making a decision isn’t the clear-cut way of stopping an addiction.

Now, as for not relapsing? All can agree keeping busy is the answer. Otherwise, perhaps explaining Jada’s jumps from one addiction to another, you’ll just find something else to cope which may be worse or maybe not as bad, but still a terrible habit to pick up.

Adrienne: and you have to be willing to learn another way to cope.

I should note they also talk about how withdrawal is, well at least August did, but not in detail. Which was kind of unfortunate to me since that, in my mind, is part of the fear of getting better. Suffering through withdrawal has always been seen and talked about as hell and August notes it was like being hit by a bus. So trying to understand how he went through it alone, with being checked on by Jada, was something I wished was elaborated on more. Alongside Adrienne going through, likely, different methods to get and stay clean. Much less, if she went through good and bad facilities, what to look out for.

Mostly because, people know what needs to be done but knowing how to do it and what to look for are far less common. So even taking note these people got money so they can afford better care than the average person, having an idea of where to start once you bottomed out would have been nice. Also, how to deal with the feeling that you are about to relapse. Taking note it is sometimes one hour at a time, or day at a time, hearing how either dealt with the itch or desire would have added more layers to not just hearing about them going towards and hitting rock bottom, but how they got to and stay afloat.

Not to sound ungrateful or as if, as Adrienne makes clear, I’m not appreciative of a rather private person opening up. Never mind the PSA they put at the end of the episode, it is just that PSAs don’t compare to storytelling in the form of which we saw at the red table. So even if you aren’t in the midst of the situation, or someone you love, having that reference you know is real and wasn’t embellished for entertainment or dramatic purposes feels so necessary. So it is just unfortunate that wasn’t part of the conversation.

“Sometimes it does take that. It takes something outside of us to give us that hope, to give us, ‘Okay, I wanna reach for that’ You know what I’m saying? In order to get the strength, because guess what? If we had it for ourselves, we wouldn’t even be there!”- Jada

“[…] if someone else can love you that much that it hurts them, why doesn’t it bother you that you’re actually hurting yourself?” – August Alsina