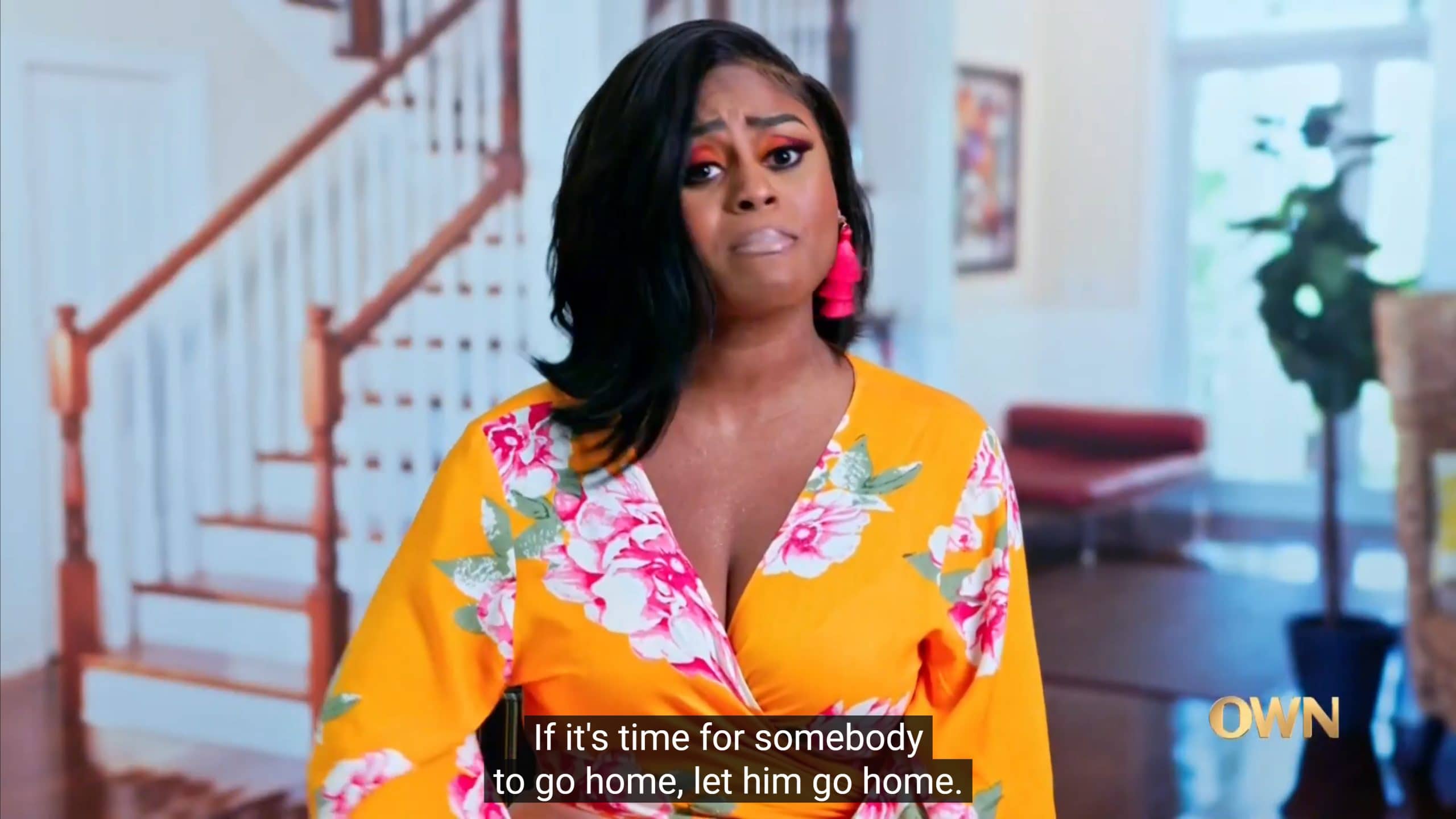 After a delay, it is determined who is the latest guy who isn’t Ready To Love, and that man doesn’t even show up for his elimination. Can you guess who?

So You Wanted to Start Some Mess I Heard? – Alonzo, Shareese, Kadian, Justice, Tranika

The bottom three men, LJ, Alonzo, and Justice, are put on a group date, and only LJ rises to the occasion. The other men? They double down on why they are in the bottom. Alonzo gets very aggressive during a go-kart race and even furthers Tranika’s wrist injury. Then, to follow that, Shareese talks about barbecuing him, which is hard to interpret since what does that even mean? But, while we can’t define what that means, it is clear it isn’t taken well.

How do we know? Because Alonzo, when Shareese decides to have one-on-one time with him, Alonzo is ready for a verbal altercation. One Shareese isn’t prepared for since she didn’t take much note of her comment or think Alonzo was justified in escalating things to curse words and having a pool cue gestured in a threatening way. Now, Kadian, of all people, is called in to settle things, but that wasn’t the best idea.

Why? Because she just had a whole thing with Justice about him not being proactive in pursuing her. Which she had Tranika there in case emotions rose. But, all that can be seen is why Kadian was in the bottom and why she probably will be when the men get to eliminate again – since it isn’t like anyone beyond Swasey has her on their radar.

While Justice and Alonzo are in the struggle, others are flourishing. Mike and Brandi, as always, are cute and don’t seem to have many issues. Granted, they haven’t met each other’s friends or family yet, but they are doing well without third parties. Sampson, as we’ve seen with any woman he is with, is charming, and in this case, it is Lunie on the receiving end, and then there is Tranika and LJ.

Like Sampson, Tranika gets along with everyone and is the epitome of someone ready to date, love, and maybe settle down and marry. LJ, with the critique being he is just a friendly island guy, is trying to show his more serious side and does that with Tranika. He talks about his daughter, she brings up being raised in a blended family, and with him turning down the charm and getting into the personal, you can see it is appreciated.

The Writing Was Already Spread Across the Wall – Alonzo, Justice, Brandi, Tranika

It all came down to whose attitude was worse between Alonzo and Justice. Yes, Justice’s preference regarding dating is terrible on a show like this, but Alonzo blowing up on Shareese made him safe. For between someone with an air of indifference to someone who curses at you and presents a threat of violence, even if it isn’t their intention? It’s an easy choice.

Now, this doesn’t mean Justice is safe. Like Kadian, he doesn’t have many fans, and those who root for him have options. So expect him to return to the chopping block unless he steps up and makes these ladies feel like they have his interest.

“Ready To Love” is a staple on OWN, with two seasons a year, at minimum. With that, you catch onto the type the show tries to cast, how it crafts storylines, and the editing tricks. Like with any show, this leads to many things becoming very familiar, and even if the people change, enough stays the same for you to know what’s going to happen.

Case in point, what anchors “Ready To Love” being a show about romance is Sampson for the men and Tranika for the women since they present an ideal. As for everyone else? A lot exist in the middle, with some, like Shareese and Kadian, existing on the far end where you can see their casting was about how they could make sparks fly. Which, as said in the last episode, isn’t to say that is Shareese’s goal or even Kadian’s. Both deserve grace because dating on camera surely isn’t easy.

However, only so much can be blamed on producers and editors. No one is going to have footage of what you didn’t say or do. Hence, a lot of the drama throughout the series comes from conversations that were off-camera put on camera.

Ready To Love: Season 7/ Episode 5 “It’s Barbecue Time” – Recap/ Review (with Spoilers)
Overall
“Ready To Love” has come to that point where it needs a real shake-up. Not having contestants enter differently, but just a real, notable change.
Highlights
It Feels Formulaic
Disputable
75
Follow Wherever I Look on Twitter and Instagram, Like us on Facebook, and Subscribe to the YouTube Channel.