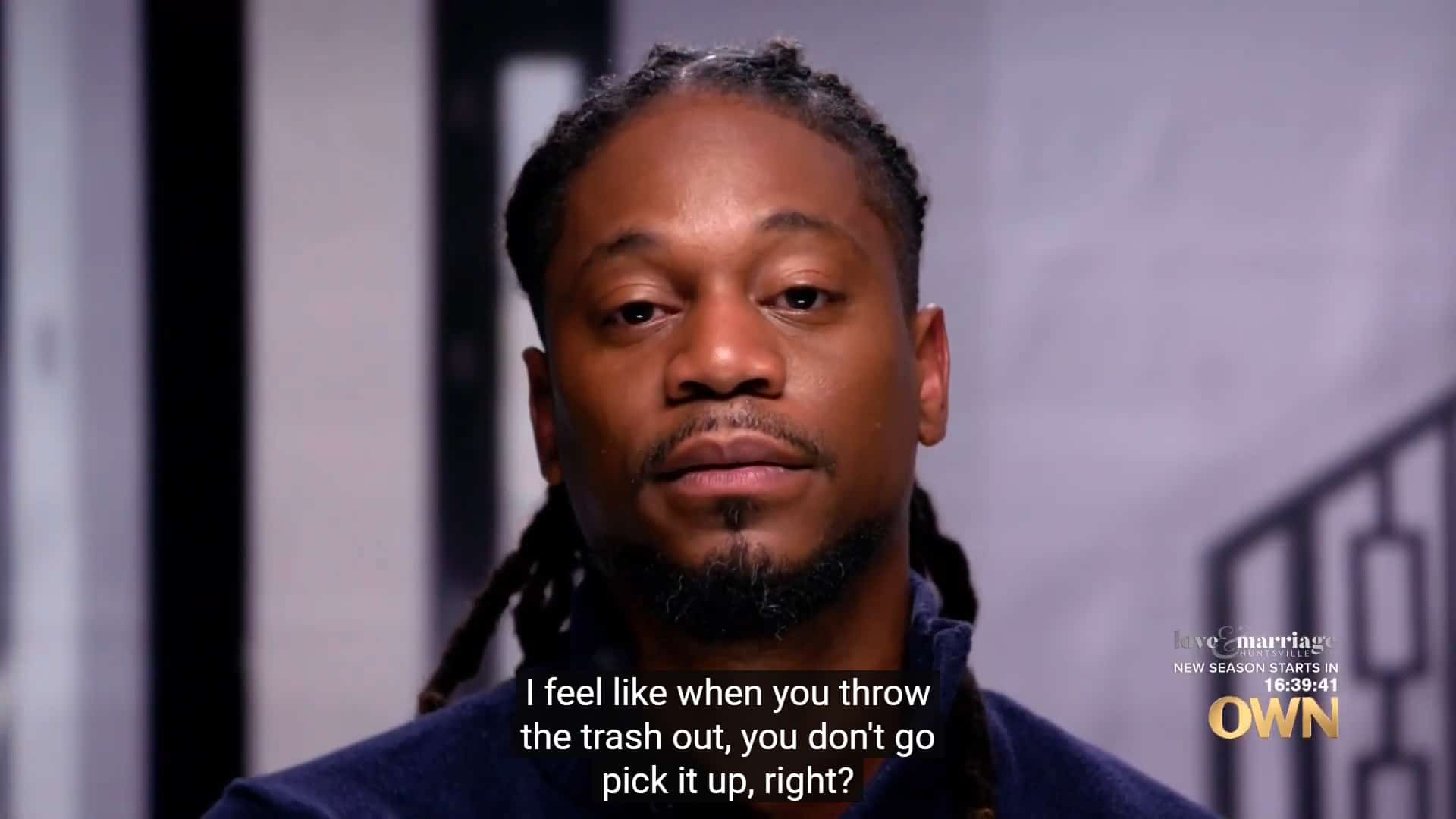 Two men end their journey this episode as the exes come marching in, much to the chagrin of some of the men.

Down Goes One – Eric, DaKiya, Tommy

Something went down between Eric and DaKiya. Despite all the flirtation that goes around this season, which is quite sexual, DaKiya is not down for that. So when Eric seemingly grabbed her or touched her inappropriately in public? That was it for her. Which, after some reflection, maybe because he didn’t want what happened to create further discussion, as the Paul thing did in the last season, Eric tells Tommy he is self-eliminating, and with that, nothing else is said.

Meeting exes is not something Clifton finds value in, so when it comes to meeting Joi and DaKiya’s ex, he puts on a brave face, but it isn’t just you that can see he is agitated. Both exes get the vibe, and while Clifton isn’t disrespectful, he has an “I’m just here so I won’t get fined” attitude. Which, to DaKiya and Joi’s credit, they understand, so they don’t hold it against him.

As for the rest? They make the best of an awkward situation. Ace’s ex meets Laverne and Tory, who surprisingly is one of her interests, and try to make nice and answer questions. Now, yes, with both Ace and Joi’s ex, Laverne is very boisterous and props himself up, but that’s who he is. It makes the moment go from awkward to comical. However, Tory doesn’t necessarily do as well in his situations. With Ace, the final verdict is that Tory is someone to be led, and won’t be the leader, if that is what Ace wants in her next relationship. Then, when he meets Sabrina’s ex? Honestly, Tory seems tapped out on trying to win her back, and she recognizes that the truth or dare game likely killed things there.

Speaking of Sabrina, alongside Tory, she has Demetrius and Donovan meet her ex. This leads to Demetrius learning Sabrina likes to be part of the decision-making process, and leaving her out of it will be seen as slight. This gives him something to think about since it appears he likes to lead without having to worry about deliberation. As for Donovan? You know, he just seems glad to be there in consideration and able to really compete.

I’d say he also brings that vibe when it comes to meeting Carmen’s ex with Paul, who, like Sabrina’s ex, says Donovan is the one. Now, why didn’t Paul do well? The reason is that Carmen’s lifestyle doesn’t seem like something Paul can handle, according to Carmen’s ex. But, while Paul doesn’t do well with Carmen, at the very least, he may make some headway with Tina. While she does have Demetrius on the date, once Demetrius hears about Tina being willing to cut people off and things like that, he is turned off while Paul just rolls with it. Add in Demetrius raising red flags for her and her ex? Well, that might be one less option for him.

You Showing Your Behind Right Now – DaKiya, Tory, Sabrina, Laverne

When the ladies deliberate on who is going home, despite Eric eliminating himself, the names that come up are Laverne, Tory, and Demetrius. Of the three, Laverne and Tory are chosen, and things get a bit heated during the elimination. Note: Not with Tory, he takes being in the bottom two okay, and with Laverne getting eliminated, that means he has Ace to himself, and with no competition, the way many of the ladies think he prefers to date.

However, Laverne? Oh, like we saw last time, he gets nasty. But with Precious planting in his head there is a conspiracy to get rid of him, he comes in hot and firing on Sabrina. Though, let’s be clear, he doesn’t call Sabrina out of her name or anything like that. He does accuse her being against him, perhaps because of how that Truth or Dare sped up the process, and he does overtalk her. That combination doesn’t go over well with her, to the point of her walking away before saying he is not ready to love, and the producers even try to push him to apologize.

Unfortunately, that doesn’t happen, and be it ego or embarrassment, Laverne doubles down and says how he’ll just be with his dog, he is done dating, and hunches off this being the end between him and Ace.

This Is Why Boundaries Are Needed

Since the #MeToo movement, boundaries have come to the forefront when it comes to dating and expectations. Also, communication has become a much bigger deal, especially regarding flirting, even if there is innuendo, not being cut and dry permission. In many ways, the Eric and DaKiya incident shows why this more sexually charged season has been a bit eye-brow raising for while there is some reciprocation, clearly, not everyone gets there is a line.

Now, this isn’t to say Eric is a bad person who violates women left and right and then cries wolf. More so, it presents a prime example that you need clear permission before you do things and how no one, women, in particular, will laugh off comfortable moments anymore. You better come correct and not just rely on body language and what you perceive are signs.

Sabrina, Ace, and Clifton Making Points As To Why Meeting The Exes Is A Good And Bad Idea

Bad enough you know everyone who you like is talking to, but now meeting an ex? As you can imagine, and Clifton verbalizes, what can you learn from them besides why they failed? In the case of Ace and Sabrina, because the ex knows you well, they know you at your worst and best and can help these men make their decision, and you make yours.

Like when it comes to Sabrina, her ex makes it clear that her being petite and smiling all the time doesn’t mean she is just happy to be in the room and getting to cuddle. She wants to be an active part of her relationship and potentially her partner’s life. Not to the point of running it, but if it is a decision that will affect her, she needs to be given a notable say.

Then with Ace, I think as we’ve seen throughout the various seasons, some are just happy to be dating again and getting attention. So with that, it is easy to have rose-colored glasses because you aren’t in the bottom two, multiple men or women fancy you openly, on camera, and it is a nice feeling. Hence the need for exes and friends to show up and remind you this is reality television and not everything is at it appears. And in terms of exes like Ace’s in particular, having someone who knows what questions to ask to jar you out of this comfort place you seem locked into.

Let me preface this by saying it is acknowledged that the cast can share secrets and information off-camera that could change things, so the deliberation room is for our benefit, and there could be an open conversation. But, more often than not, I feel the deliberation room is about planting the seeds for drama. For if it isn’t people having to deal with not being someone’s top or their boo having a interest in someone they didn’t expect, it is those elimination conversations.

Now, I like people fighting for their person and making it clear others have them misconstrued, but let’s not forget Ready To Love is a numbers game. One, I don’t think it ever got to the point Laverne mentioned, of people trying to eliminate someone in a coordinated attack, but it really does only take one feeling a certain type of way, and not holding themselves accountable, if not the show, to make someone look unappealing.

Clifton, acting as he did, raised a red flag for Joi’s ex, and imagine if DaKiya or even Joi mentioned him getting gruff and stand-offish – that could poison the well. He could end up in the bottom two because of one opinion. Heck, take note of Precious, who, with the comment of being a party girl, that haunted her right to elimination.

Yet, what can the show really do? It’s flawed by design and tries to mask its desire for entertainment by presenting a lot of what we see as transparency.

Ready To Love: Season 6/ Episode 7 “The Ex Files” – Recap/ Review (with Spoilers)
Overall
I think the high we had from earlier this season is gone, and we're right back into side-eyeing and questioning whether love is too high a bar for this show to achieve. Even if its cast members aren't young anymore and claim they are ready for something serious.
Highlights
Sabrina, Ace, and Clifton Making Points As To Why Meeting The Exes Is A Good And Bad Idea
This Is Why Boundaries Are Needed
Disputable
Deliberation Conversations Leaving The Room
81
Subscribe to our mailing list Follow Wherever I Look on Twitter and Instagram, Like us on Facebook, and Subscribe to the YouTube Channel.