The drama we see every season begins as the ladies start playing “dibs” on certain men who remind them that dating is “a process.”

Once again, the only functional couple here seems to be Nyaa and Kris. He kisses her in front of the group, they openly flirty, and it leaves you to believe they minas well go now before the drama starts. Because you can see some women aren’t finding a match that cares for them like Kris does Nyaa, so they might make a move.

After all, it is a “journey,” and taking someone else’s special person is part of “the process.”

The Root Of The Problem – Adriana, Khalfani, Denice, Rashid 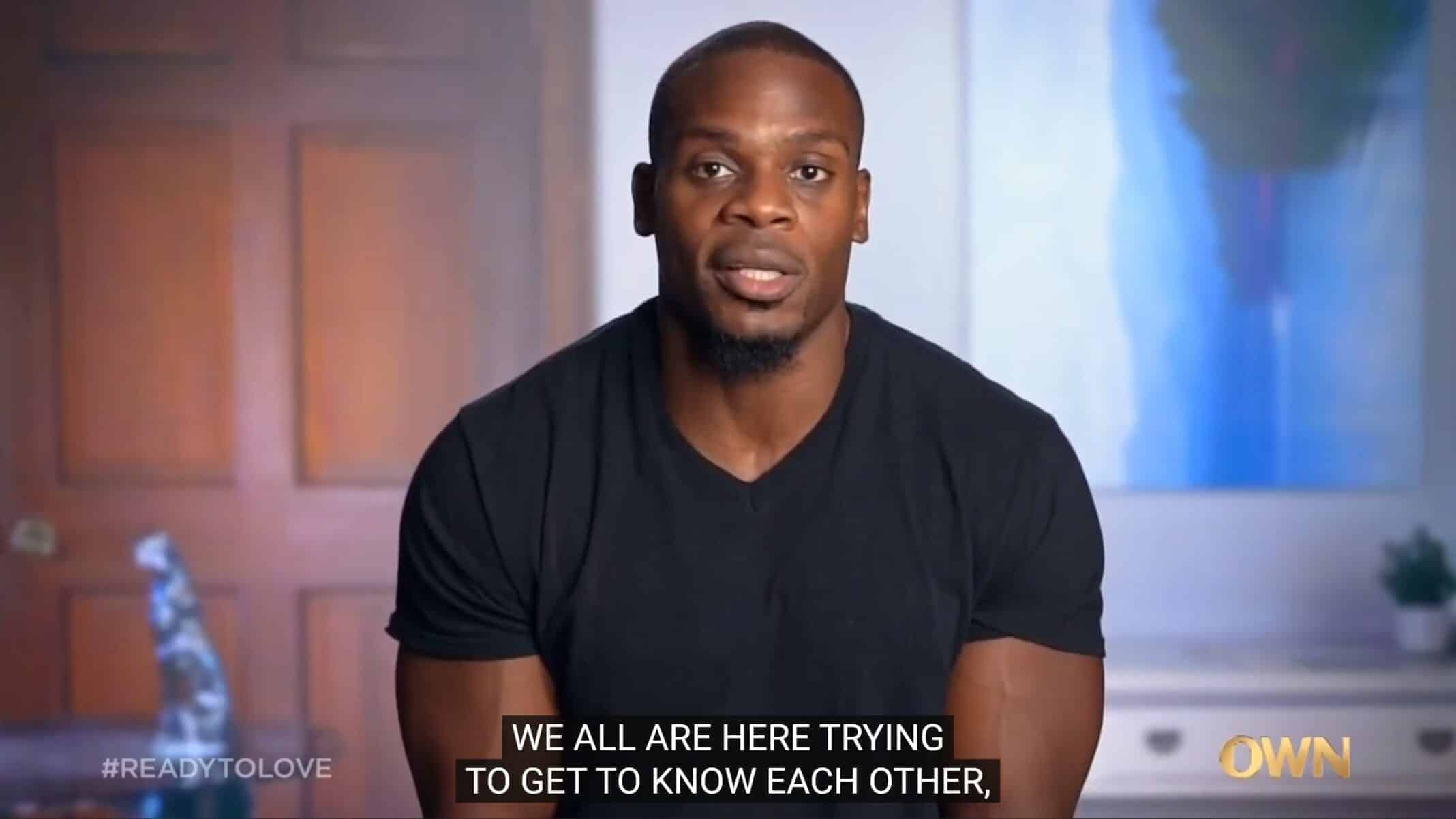 But, as long time watchers of Ready To Love know and have seen, part of “the process” is that drama of knowing, or seeing, your special person with someone else. Now, sometimes it has been the men who have felt this way, as displayed last season with Alexis’ love triangle. However, more often than not, it is the women.

For this topic, the focus is on Denice, who has an issue with Adriana. Why? Well, let’s run it down. First and foremost, it is because Adriana was all over Khalfani, who Denice has claimed, and it seems there is this unspoken understanding that once a woman claims a man, back the f*** off. However, there is also Adriana coming for Denice, pulling her aside, and questioning her about her comments over Rashid.

Oh, and to add insult to injury, she doesn’t have this private chat from the jump! She first brings it to Rashid and has Edwin and Symone there. Which, with it being an elimination week for the women, presenting Denice as someone who is color struck, small-minded, and what have you, that isn’t a good look. Especially when the guys get together in Tommy’s man cave, and that gets brought up.

Yet, Adriana does eventually squash her beef with Denice – for now. Granted, it took Denice bringing up how she went missing for days and was nearly killed for Adriana to understand why Denice called Rashid a narcissist, but the whole conversation was a teachable moment. Mainly, before you gossip about people, get the facts.

However, we should note that just as Adriana is causing a situation that could get Denice kicked, some of the ladies are setting the kind of trap that could get the other men kicked. Symone, for example, sees Jay go to Wynter’s room without a shirt on since they need to talk, and Jay was out by the pool all day – mostly with Joy.

But with that in mind, Symone decides to not speak to Jay privately and try to tell him to not mess with these ladies’ hearts or talk to Joy one on one. Instead, she brings it up while those two are cuddling with her having no reason to say a damn word.

Now, don’t get us wrong, if Joy and Jay were exclusive, I could understand her saying something. However, ain’t nobody made a single commitment here beyond Nyaa and Kris – and that could be conditional as well. So for her to get into their business like that was so out of pocket. Yet, you do have to respect Symone for, if she had to mind other people’s business, deciding to tell both Jay and Joy what she saw at the same time. It isn’t like Shay, who hasn’t really bonded with anyone, choosing to spy on Bryan, who has a thing with Alex, and taking note he was just with Alisha and bringing Alisha to see what Bryan is doing. That was PURELY for drama.

Which isn’t to downplay Bryan could come off like he is playing both women. However, there is again the issue that this show doesn’t establish what exclusivity means and so everyone is operating by different rules. And while some recognize everyone is single, you can also see once people like someone, they ready to fight and feel offended when they learn they aren’t the only one.

Not to say Bryan going from Alisha’s room, talking about watching a movie, to getting a goodnight kiss from Alex, and maybe planning to go back to Alisha’s room wasn’t some player s***. But, again, have you seen one conversation about the rules of engagement on this show?

Vulnerability is just being okay with the possibility of someone hurting you.
— Alex

And So The Drama Begins

This is a reality show and competition, so drama is the selling point. Rarely will you ever find a reality show without arguing, backstabbing, and the worst aspects of humanity. Even Natural Geographic shows animals killing each other. Yet, it’s one thing seeing that from 20 somethings and teens, some of these people pushing 50.

So even for the younger ones, like Adriana, her deciding not to talk to Denice, as she eventually does, one on one, but first bring the issue to Rashid, make him mad, and then make it a group conversation? Trash. Symone deciding to be in another couple’s business, despite her having nothing to do with Jay? Trash. And you may say, “That’s women looking out for each other” or “We don’t know the dynamic the ladies have with each other or the men.” That is correct. However, the narrative being painted here is that some of these ladies don’t know how to focus on finding love for themselves rather than worrying about what someone else has – like Denice said.

For let’s be real here, while everyone should be cordial, how can you be friends with someone who openly is going for the same person you are? Especially since they are at a resort! There is no being in this part of the city and them in another, you know where their room is, and the possibility of running into them is high. So people getting in their feelings just reminds you that the basis of Ready To Love is flawed in terms of dating, but just right for drama.

I mean, Shay is a prime example! Ain’t nobody checking for Shay, based on the way things are edited. Yet, look at her finding purpose by causing some drama!

While very few hold steady the idea this is a dating show, as for the competition aspect? Oh, between the drama Adriana has brought, Shay, and Symone? It is going to make who goes home in the next episode a betting person's game. For while you know Shay, Symone, and Denice are likely to be on that list, the question is, who of the three have rubbed the guys the wrong way worse?