As we approach the penultimate episode of the season, Alexis finds herself ruffling some feathers – for both the men and women.

And There Was Peace: Tondy, Mario, Ashima, Darin, Reva

With Reva eliminating herself, Tondy and Mario are now set for the final three and are in bliss. Which allows them to laugh and side-eye the drama the other couples go through. But not Darin and Ashima. For while trust continues to be a major issue for them, the more they get comfortable with being out of the honeymoon phase, the more there seems to be progress towards a real relationship.

We’ve come to a point where it seems Alexis is the decision-maker and the men are just waiting to see what she chooses. So with her choosing Brent and publicly dismissing London, he heads back to Devyne, who really isn’t fond of the idea of being #2. However, there remains something there for London, so as much as she was made the alternate for so long and he wouldn’t commit to her as Darin committed to Ashima, she takes him back. Not to the point of allowing him to kiss and do all Brent did a few episodes back, but he is allowed to try to win back her affection.

As for Brent? Well, as he has been most of the season, he is just chill. He played the long game and got the girl most of the guys at least once thought about, maybe even approached. And while they are still far too new to say they may end up in the final three couples, that is the issue for these two sets.

For, in this episode, Nephew Tommy reveals one man and one woman have to go home, and it seems to be either Brent and Alexis, who are new, or London and Devyne, who may have been around since the beginning, but not consistent.

Wanna Be Starting Something: Devyne, Alexis

Leading to the major drama of the episode. When it comes to Alexis, as noted in the latest episode of Getting Ignorant With It, it is becoming clear there has been a certain joy that has come with being the most desired. Which, according to our peer Shonda Nicole, is partly due just to her being the youngest on the show. However, with the way Alexis puts it, it could be just because she didn’t make it easy for the guys, and they might have been attracted to the chase.

Take note, most of the aggressive women were the first to be eliminated. Especially those who were willing to take initiative and pursue the men. So to say Alexis hasn’t been a master at playing this game as good, if not better, than the men, would be an understatement.

However, problems arise when she flaunts this and pushes the idea the only reason London is back to Devyne is because she released him. This, as you can imagine, is a hurtful statement, and Devyne pushes back. Leading to, because she feels the need to be queen bee, Alexis talking about how she could easily get him back and the mention of showing receipts, how there was a threeway call she was part of, and a whole lot of nonsense.

I’m talking the kind which pushes the 44-year-old Devyne to recognize the 33-year-old Alexis is just being childish, and there is no reason to keep engaging her. Though, even when she tries to press on, Alexis seems committed to getting the last word and even threatening violence. Reminding you of the girl she was, as a kid, who seemed to take to fighting since that was the main way she knew how to defend herself.

We had a fire, but it was a different kind of flame.
— Alexis

Tondy and Mario right now represent the grown and sexy you’d think would be the norm for this show. Which isn’t to downplay Ashima and Darin, or ignore Mario’s weird need to go after Reva, despite it being clear that wasn’t going anywhere. However, when I think of Ready To Love and the people it is going for, I think Tondy and Mario. The rest of these people? I think some are ready to love, but the majority are more so ready to date. 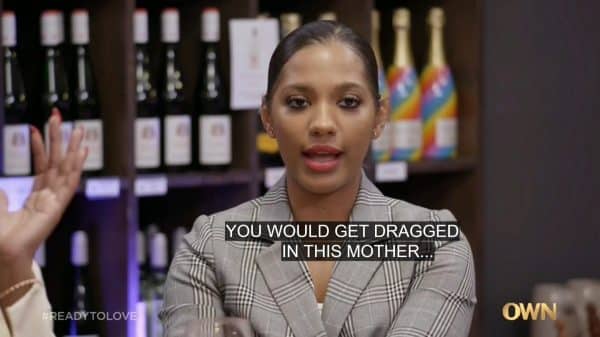 Alexis: You would get dragged in this mother…

Do we think Alexis is a bad person? No. However, I think like how the men can seem full of themselves due to all the attention we see them get, she might have gotten a bit like that. Which, considering she seemingly has long relationships, you can understand her playing the field as she does. Add on she was treated like the pick of the litter, and you can also understand her playing the dudes as she did.

However, the main issue that comes about with her is this conflict with Devyne. Someone who has kept most of her insecurities regarding London out of public discussion and, at most, shared it with viewers. So for Alexis to feel the need to be so public and think being petty and rude is equal to honesty is such a shame.

After all, the whole journey is already fraught with such strange dynamics that make the idea of dating that person hard. Why further complicate it by saying the wicked things you participated in and just now choose to reveal? It negates this idea of sisterhood or looking out for your fellow woman and makes it seem, like London, even if you are hanging with this person heavy right now, you want to make sure your alternate is still free and open in case that person screws up. You know, so both can be kept on their toes.

Trajectory – Plateau: With egos running high, we get more reality show drama than a sense of peace and love. But, considering Ready To Love is a reality show competition, you have to take that interpersonal drama alongside those cute moments you swoon for.