Between Aaron realizing he has a problem and us learning Alexx might be a bit of a player as well, it’s hard to say if these women aren’t wasting their time.

Table of Contents show
1 Moving On Up The List: Aaron, Alexx, Stormy, Ashlee, Courtney, Angel, Tommy, Shanta
1.1 Commentary
2 Moving on Down: Tiffany, Shea, Michael, Alexx
2.1 Commentary
3 This Week’s Elimination Is: Shanta, Alexx, Aaron, Rita
3.1 Commentary
4 On The Fence
5 Follow Wherever I Look on Twitter, Like us on Facebook and Subscribe to the YouTube Channel.
5.1 Check Out Other TV Recaps

With one woman after another being eliminated, and Aaron still playing the field, he feels the pressure to start making choices. Especially since, behind his back, the women are questioning him and, to his face, there are those like Shanta who are confronting him about his actions. Which, while Melinda was just talking to him about that, I guess she was being too “emotional” for him. Yet, Shanta being blunt and to the point seemingly put a crack in his thick skull.

Leading to him narrowing down his top two to Stormy, since it seems she is fairly amiable towards him, easy to get along with, and Courtney. Yes, Courtney FINALLY gets taken off the bench and gets a date. Part of the issue likely is that, unlike the rest, her job is based solely in Atlanta. However, with her not calling Aaron out, and him seemingly in love with her behind (you can see his hand grazing) she moves up.

But, what about Angel right? Well, despite her being the only one trying to defend Aaron, it seems she doesn’t come to mind. It isn’t clear why, since she has been fairly consistent. One can only fathom after the Melinda situation, it seems Aaron may want a break from his day 1 ladies.

Speaking of day 1, it has been a long time since Ashlee went on a date or had a moment. Thankfully, she gets a date with Alexx and they hit it off well. Which doesn’t come as a shock to him since Ashlee is rather easy to get along with. She, in her own words, is young, beautiful, funny, amongst a dozen other adjectives, and to boot – they are close in age. Something not really noted in the show much, but may just be an ignored factor. Alexx: I feel like I can just be myself.

I really don’t want it to seem like I’m trashing Aaron just because. The dude is a stranger to me and all I know is the person we see after the editors got done with what they filmed. With that said, based on who we see, I think he is still playing a game. Let’s take note, Stormy and Courtney are two people who won’t always be up under Aaron because of their work. Stormy is an international DJ who has been getting so many gigs that she set aside pains she was having for opportunities. Pains which turned out to be warnings that her kidneys may fail.

Then with Courtney, she is a flight attendant. In both of these scenarios, Aaron would be dating the women part-time. Which isn’t to discount him talking to Stormy about balance between work and their relationship. That is, on top of him noting he is getting to that age where he is too old to be out here chasing women. The problem is, Aaron is starting to seem like the type who knows what his issues are but because he isn’t consistently being called out on them, he doesn’t pursue fixing them.

Which might be his problem because there aren’t any Shantas in his life. There might not be someone saying that he is trash, insecure, or anything like that. So, rather than work on himself, instead, he treats those thoughts like flies buzzing near his ear. You know, he just shoos them off. And keeps it moving.

Bringing us to Alexx. He too seems to be someone whose words don’t match his actions. All this time he seemed like someone hesitant to be with anyone but Tiffany but we hear about him texting up Shanta, being low-key messy with Ashlee, and showing a whole new side to him. If not a side he was more subtle about before but now apparently is comfortable with. Not to say I don’t get this is a dating show but, with him consistently saying “Tiffany” before, it makes him being “open to the process,” lead to this vibe that he is an evolved form of Aaron.

For a long time, it seemed Tiffany and Shea were two women who got their men and was just riding it out till the show was over. As noted, Alexx has been saying Tiffany’s name since the beginning and she has been saying his name since the start. When it comes to Michael and Shea? Most of the girls thought that was a done deal after they snuck away to talk during the initial meet up. However, Shea not being sure about kids is an issue. Reason being, like most of the women, there were issues in the past and they have made her cautious.

Tiffany is dealing with a similar issue with Alexx, though not involving kids. With her, she likes consistency and routine – since something happened in her past. Making it so, when not given that by Alexx, she addresses it. Thus making Alexx feel like she is being controlling when really that doesn’t seem to be the case. She is just acknowledging an issue and hoping he’ll take the initiative to steer them back to the place they used to be. Unfortunately for her though, it seems he might be steering himself towards Ashlee instead. 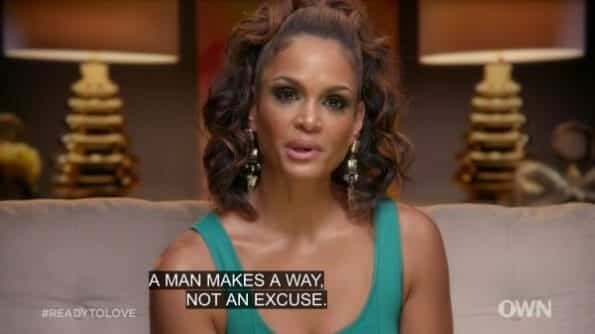 Tiffany: A man makes a way, not an excuse.

I think there is a need to note that of the women left, there is a clear difference between most of the 40-year-old women and most of the 30-year-old women. As seen by Tiffany, Shea, Shanta, and Melinda, the 40-year-old women aren’t for the games. The only one that doesn’t seem to apply to is Rita and, let’s be frank, it is because her and her ex have been playing a game of tag for years. So, like the 30-year-olds, she seems to be willing to deal with these men and their dealbreakers and BS. All the while, the men don’t take note of what these women’s triggers are. They just think about how they feel.

Take Tiffany. This is supposed to be, or was, his main girl, yet you’re telling me it never clicked in his mind that her checking and addressing him not texting back isn’t because of her ex? You’re 34 and I know you’ve been dating a while. I recognize you work a lot, but I refuse to believe you are oblivious to the fact that most people’s exes cause them to bring baggage into their relationships?

And it’s funny really. For most of the time, that baggage isn’t even hidden. There are stickers and labels all over their luggage. A listing of who, what, and how they’ll react because of it. The only thing in that bag really is the tools you’ll need to help them deal with whatever the issue is. It’s just about whether you will prove yourself to be someone they are willing to let them help repair past damage vs. using the same tools to make a bigger mess.

But, I guess, Alexx likes things better when they are in the honeymoon stage. Which means he’ll be in for a rude awakening depending on how Ashlee reacts to him not getting back to her. Especially since she was cheated on and so much more in her past.

Rita and Shanta were the main two who had something to worry about. For Shanta, the problem was no one was connecting with her. Yeah, she was cool, but the beauty of her honesty came with these men getting called out. Something that most of their egos aren’t really for. They want to be treated like kings and while they say they want a queen, in all honesty, it sounds like they may more so want a princess. Someone they can mold and will adapt to them. Making Shanta an issue for, at 43, she isn’t down for that BS. Either you do right or get the hell out of her face.

As for Rita? Between her going back and forth with her ex and not really connecting with anyone, she is also in the hot seat. Luckily for her, Shanta pretty much eliminates herself for she knows ain’t nothing gonna happen. In terms of Rita? Well, Aaron may lack interest, but the other guys aren’t as solid as they used to be. So she gets to stay. 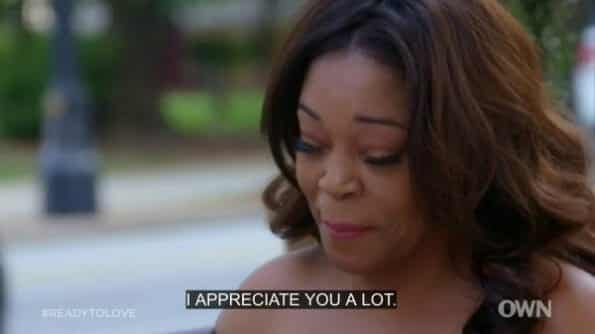 Shanta: I appreciate you a lot.

I usually make this part of a separate section but I really do think it’ll be Rita and Tiffany who will be next up for elimination. Rita simply because she isn’t going on dates where things click and two of the three guys seemingly can’t get past her being off and on with her ex. Especially since Michael keeps bringing that up so it can’t leave anyone’s mind.

As for Tiffany? You remember the season trailer right? The one where she is going off on Alexx for saying she is “Too Strong.” The writing is on the wall. I mean, looking at the trailer again, you can see Rita will be eliminated and Courtney. So the only real question might be, of the final two choices, who will the men pick?