Ready To Love: Season 1/ Episode 3 “Then There Were Three” – Recap/ Review (with Spoilers) 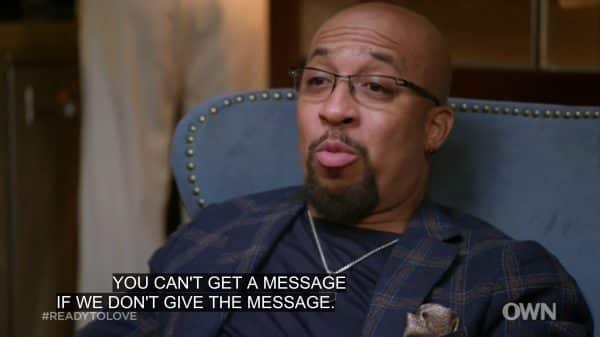 Tommy: You can't get a message if we don't give the message.

12 women to 3 men leads to the men being enabled to be all the things these women were hoping to get away from.

What I Need & What I’ve Allowed: Rita, Christina

We finally get some background on Rita! We learn she was with a man, a professional athlete – sport not named – for 3 years. Then, to add some dysfunction to it, she notes there were side chicks in that relationship. On top of that, she wanted kids and he had two so he didn’t want anymore! But, luckily for her, with bringing that up and showing herself as a fun person on her 4 to 1 group date with Aaron, that kicked her up a few notches and kept her from being eliminated.

As for Christina? Well, the more the guys see of her, the less they see her as a wife or girlfriend. Mostly because Christina is really silly and none of these dudes seem to be feeling that. So, she ends up getting eliminated.

Quite a few people, myself included, think this show needs either THE Iyanla Vanzant, or an Iyanla Vanzant type. For with each episode we hear another issue these women have that are clearly factors in their dating life. And while it is nice that they recognize negative patterns, like Ashlee, and want them to end, do they have the tools? I mean, look at how this show is set up. Are girls like Ashlee not becoming the side piece again? Are women like Rita not trying to convince themselves they are the main one while dudes like Aaron sweet talk every girl whether he likes them or not? All under the guise of not wanting to hurt no one’s feelings?

I mean, even the men could use some healing, or more reality checks, than Tommy can hand out just in a handful of conversations. Darnell alone seems like a dude who could use someone to help him deal with being cheated on like he was. Never mind help deal with the idea of being rejected on a nationally televised show. For I don’t know if this program does follow up or not, but I think it would be unfortunate to have these people put themselves out there like that, use them for ratings, and then just drop them.

The major tenants of Ready To Love are that these people are looking for something real, are too old to be BS’ing around, and thus should be comfortable in their person. Problem is, being comfortable in your person doesn’t mean others are comfortable around you. Take Dr. Lexy. Since the beginning, and I’m guilty of this too, seeing her presents the idea that she is extra, is she really a doctor, and you having a real skeptical, outright negative really, view of her. Making it so you either approach her like you do Michael, in episode 2, who got to know her and understand why she dresses and acts how she does or you act like Alexx. Someone who lets his ignorance speak for him and thus not only offends, but victim blames – for a lack of a better term.

For with Dr. Lexy, who gives such a beautiful take on the difficulties of being a confident woman, there is this struggle with being comfortable with who you are but not so much that it intimidates others. Especially potential partners. Yet, if you were insecure and/or unsure of yourself, then that becomes a problem or opens you up to be taken advantage of. Which, since it seems Dr. Lexy wasn’t down for that and was a bit “too much” for the guys, she ends up the second lady eliminated.

As for Shanta? Well, she calls out Aaron for being a playboy and it seems Aaron’s charm is starting to make it where his fan club is dwindling. For while his abs distract and smile allures some, when you have a one on one with him, no real audience, the flaws come out. Be it lying to Shanta’s face, trying to not come off as the bad guy or a jerk, and just digging a hole for himself. With the added effect of rain getting into the hole and making it where he can’t get out.

One of the things I love about this show, and I hope Will Packer, among many other male producers, take note of, is the women on this show. The Dr. Lexy, Shanta, and Christina types who represent Black women you just don’t see a huge amount of – in media that is. Especially their voices. For while I honestly can’t tell you if what Dr. Lexy said is going to change my actions immediately, it did plant a seed I do believe is going to grow.

Something I hope does happen for many since there aren’t many Black female creatives who get to put out a lot of romance or romantic comedies. Especially at the rate Tyler Perry and Packer do. So while we have Gina Prince-Blythewood and others who have leaned more towards that genre, being that they, unfortunately, don’t get the financing to increase their output, I need the dudes making most of their cash off the genre to step it up.

All I know is, Aaron better get confronted, on a regular basis, because of how he is getting these women in their emotions. Be it Courtney and Angel having a tiff or Melinda going all out and yet not being Aaron’s top choice, something may go down. Which, if it came to Aaron being smacked, not to say I’d support the violence but, I’d get why it was something one of the ladies felt needed to happen. If just for a cathartic release.

I really don’t want this to devolve into a bunch of women fighting over a man who barely respects any of their time and affections. It seems like it will go that way but I wanna be wrong so bad. Because, again, you can see these women are as serious, if not more, than the men with finding someone. So it makes Aaron’s comment about Melinda being too aggressive sound like the dumbest s*** you ever heard. Did they not hear Tommy say the title of the show? Do they, back up, does Aaron not know the premise of this show? To my knowledge, there isn’t prize money, or a paid vacation, involved. So what is his problem?

Oh, he doesn’t like women being the aggressor? Negro, this is a competition which you are in solely because you out finessed a bunch of dudes. Do you think these women won’t be the same when you woo’d damn near all of them on a regular basis? Especially when it is 12 men to 3 and the other two are basically paired up already?

I really do find the format of this show, specifically it having eliminations, such a threat to what I believe was the point of this program.

At this point, I’d say Shea, Shatava, who are Michael’s top pics are safe. Same goes with Angel, who Aaron likes and Tiffany – who wasn’t in this episode at all. Pushing the idea it is between Stormy and Shanta who might be cut next. Stormy because, straight up, Pastor Chris was likely the one for her and I don’t think any of the guys remaining will click with her. As for Shanta? I just can’t imagine Michael and her being compatible because of how traditional he is. Then with Alexx? I feel as the ladies see through Aaron’s BS, they are going to flock to Alexx and Shanta is likely to get lost in the mix. Even if she is aggressive.