Wherever I Look
Recaps, Reviews, and So Much More
Home TV Series Queen Sugar: Season 6/ Episode 9 “Tossing In The Meadows” – Recap/ Review (with Spoilers)
TV Series

As the family prepares for the birth of its newest member, a recent discovery may provide hope for saving the farm.

Let Me Carry Some Of The Burden (P1) – Blue, Ralph Angel, Darla

BLUE IS BACK! After nearly a whole season, the prodigal child returns, and he has grown, has a lineup, and is ready to talk all things DC. However, after noticing boxes and questioning if they are selling things, Darla and Ralph Angel tell Blue the truth. Especially since he is older and even asks to be treated as such.

With being more comfortable and able to relax, Billie lets her hair down and simply enjoys being around friends and family. This couldn’t have come at a better time since it’s Darla’s baby shower, and with everyone trying to make her second time around better than her first, all that could be asked for is love and light. 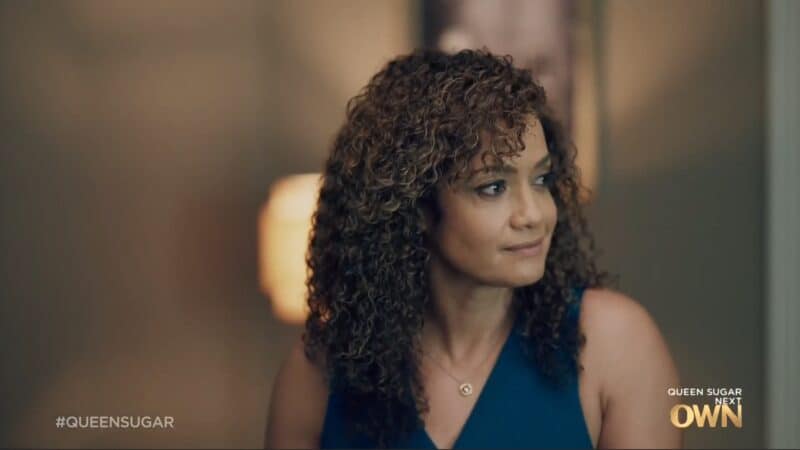 But, while all eyes are on Darla and Ralph Angel and Darla’s speech, other things are going on. For example, Nova and Dominic are gathering evidence and information which could save the farm! To make a long story short, bodies from the Thibodaux massacre might be on the Bordelon family’s land. Now, while this discovery may not stop Sam’s purchase or ownership of the land, it could at least keep him from building on it and disturbing the grave of Ralph Angel and Nova’s momma.

Alongside this gift to the family, Nova also talks to Micah, who is dealing with feelings for Isiah. The kind which he doesn’t know if they are romantic or, simply put, he just isn’t used to being this close to another man? So who better than the only member of the LGBT+ community in his family to guide him on his journey to self-discovery?

Since the family is now aware of Darla and Ralph Angel’s situation, they plan to help. Specifically, they talk to Darla, since Ralph Angel’s ego is already established, and present to her two options. There is living in a room Aunt Vi has, where she will cook and assist with the baby, or have Charley’s entire house, which will mostly be empty due to her campaigning and Micah staying on campus.

Darla presents both options to Ralph Angel, and while he isn’t fond of the idea of living under Aunt Vi, Darla wants someone with experience and could use the help, so he focuses on what would make her happy. Though to add onto Darla’s reasoning, she and Charley were having a conversation on motherhood, and then Aunt Vi joined for but a moment until discomfort led her to leave. So, in a way, it seems Darla is willing to, once again, share her child, but this time just wants a more active role in the experience of upbringing. 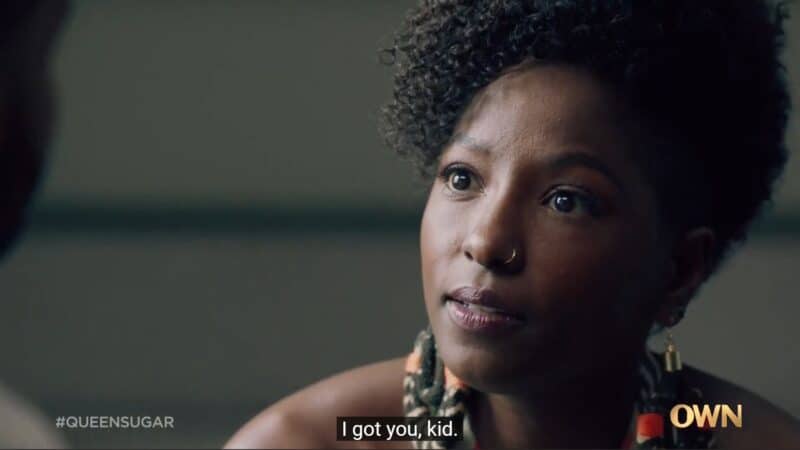 While we’ve seen many shows with two guys who are best friends, intimacy between men isn’t necessarily an American norm outside of the queer community. Because of this, it is easy to understand Micah’s confusion and even his temptation to explore the possibility that he is fluid, gay, or maybe Isiah is an exception to his pattern. Which Nova handles with such grace and understanding that it makes me wish the show did use flashbacks, if just to see a young Micah and Nova hang out. For their scene together really does show how important it is to have a diverse community around your child since you never know what they may need.

You know how I know Darla has healed from her past? She was able to say something good about everyone in the room, despite how they put her down or abandoned her just a few years ago. Blue’s paternity rocked that family and led to Darla being ostracized, losing her job, and yet here she is, back in the fold, smiling, laughing, and having conversations like all is either forgotten or forgiven.

This includes Aunt Vi, who led the pack, being someone Darla is willing to live with while at her and her child’s most vulnerable state! I don’t know if that should be considered maturity or not, but it definitely is something I don’t think the average person is capable of in such a short amount of time.

Billie Finally Letting Her Hair Down

Hair can say a lot about people, and often you could say the state of someone’s hair tells you where they are. Blue’s hair used to lack a proper lineup because he was a kid, but with him approaching those teen years, there is a desire to look fresh and cute for his peers. Charley’s hair is always put together because she likes to maintain a certain image, and Nova’s is rarely straightened, for she wants to present herself as afro-centric as possible.

But with Billie, I find the transition from pulled uptight hair to letting those curls loose a true sign that she is comfortable. She no longer feels like a guest and needs to be prim and proper like she is company. Billie is at home, can let her hair down, and her whole being breathe. 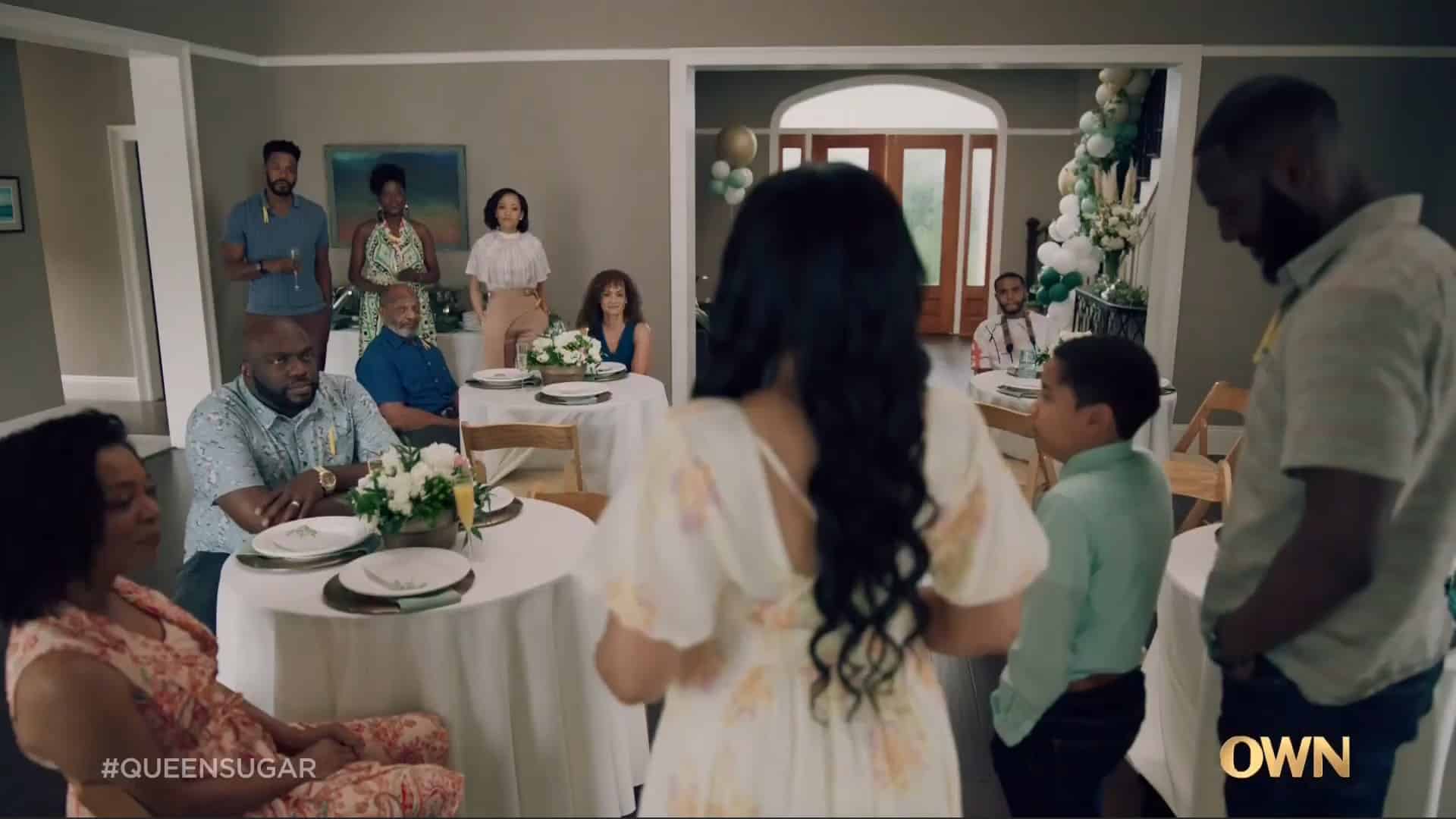 Queen Sugar: Season 6/ Episode 9 “Tossing In The Meadows” – Recap/ Review (with Spoilers)
Trajectory: Plateau
Reminiscent to season 5, "Tossing In The Meadows" is an episode focused on family, and with that comes the ability to truly just enjoy what's going on and not worry about the drama or trauma that could be around the corner. Rather, we're just reminded of the love the Bordelon family has for one another and how, despite their differences, what makes them family isn't strictly blood but pursuing long-term commitments with each other.
Highlights
Nova and Micah's Conversation
Darla Forgiving Aunt Vi
Billie Finally Letting Her Hair Down
Disputable
83
You Might Be Interested In