Just as Darla is reaching a new chapter, as is Hollywood, COVID-19 strikes, and the shutdowns begin.

While things may never be as they were, Darla and Charley might be coming to the point they were when Darla was Charley’s assistant. Granted, all we see is Charley trying to prepare Darla for an interview, to obtain a management position, but in instilling her with power and value, Darla gets a taste of sisterhood that was lost to her years ago.

Now, whether or not Charley knows Darla will soon be her sister-in-law, that isn’t made obvious, but considering Ralph Angel and Darla are already making wedding and honeymoon plans, it seems likely. Though considering the episode takes place in Mid-March, you and I both know these wedding plans are possibly for naught.

Suddenly, despite having a meeting on the books, Parker abandons a conversation she was supposed to have with Charley to head to New York. The reason? Well, you can only fathom for no one, not even Parker, offers any. But with learning her son is now in a fraternity with a sordid reputation and the rise of COVID numbers, Charley has other things on her mind. 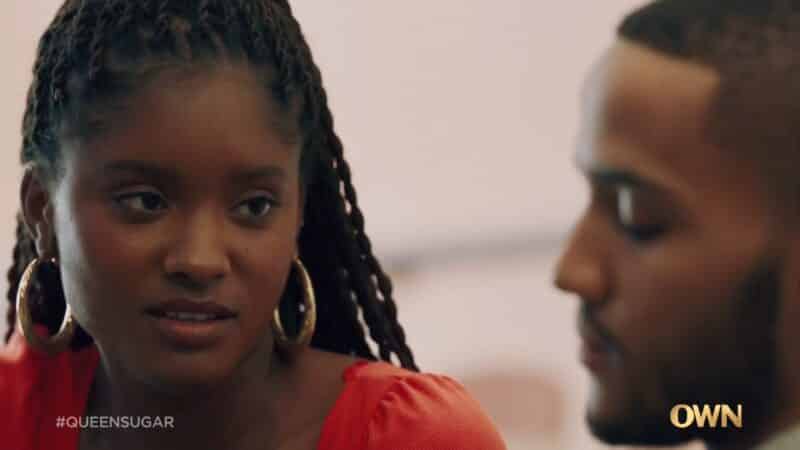 Speaking of Micah, while things are going good at Xavier thus far, there are signs that things between him and Kiki might be on the rocks. At least due to jealous looks and Micah even conveying some insecurities as he sees Kiki talk to a boy in her class. Though with both presenting the idea everything is fine, despite how they may seem, while we aren’t reassured, they seem to be.

But when it comes to Nova and Calvin? Well, while Kiki and Micah might be on the mend, it seems both Micah and his aunt Nova might be single by the time the season is over. Micah due to all the opportunities he’ll be tempted within college and Nova? Well, at Calvin’s grandfather’s birthday party, his ex-wife Hailey is there. As you can imagine, having your ex flaunt his mistress at a family event, even have them meeting your children, feels like a slap in the face. 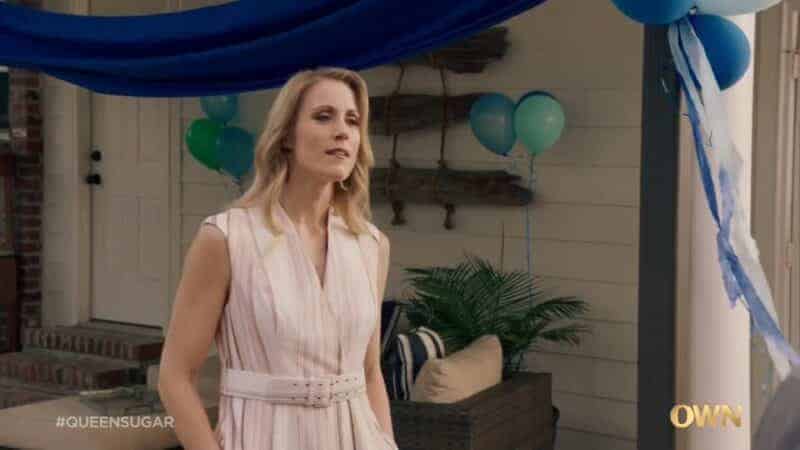 So what does Hailey do? Well, she exposes that Nova wasn’t the first woman Calvin cheated on her with, Black women specifically. Also, usually Calvin goes for someone thicker, still of a darker complexion, but that Nova is slightly different from his usual type. Now, does Nova confront Calvin about this? Yes. However, she doesn’t dig into the idea that maybe Calvin cheated on Hailey with multiple women or if he has kids out there. Rather, he admits he dated other Black women, and it seems Nova doesn’t dig into the questions truly worth asking. Which is strange since isn’t she a journalist?

And So It Begins – Charley, Hollywood, Aunt Vi

No longer isolated in coastal cities, COVID-19 starts moving inland, and with that happening, Charley and the city council decide to shut down the parish. Because of this happening, Aunt Vi’s pie shop has to close, and Hollywood’s spot for men doesn’t get to have its grand opening. Now, whether or not it means it’ll never open and whether Aunt Vi will lose her business? Well, it depends on how much pain the writers think our leads deserve to endure.

They can’t steal our joy, unless we let them.
— Darla

Between COVID and Charley Going To War With Parker and the Beckington Group, I Prefer Covid

The Bordelon family, Charley especially, has spent nearly the entire series at war to protect their land, Black farmers, and more from the Landry family’s tyranny. Which, as we’ve said a few times now, is an understandable battle, which has escalated to the point of addressing how eminent domain has taken away Black wealth and land throughout American History. However, this never-ending fight has grown tiresome.

Such a statement, we’ll admit, we do have complicated feelings in saying. Mainly due to the fact this is an active fight in some areas. Charley’s story, while dramatized and fictional, surely represents many battles throughout history. And as much as there is the desire for escapism, at the same time, it would be a shame if only movies or limited series exposed the raw truth of the Black experience in America, especially in modern times.

For one of the main goals of Queen Sugar has seemingly been the pursuit of balancing the joys that can be found, and the fight to undo the wrongs of the past. Yet, even with Queen Sugar likely to switch from corporations and the government taking people’s land to the lack of investment in certain (Black) communities, it’s just enough of a change to feel like some form of a reprieve.

Granted, I still firmly believe we’re going to lose a supporting character, with Prosper high on my list. But we’re in season 5 now, and while Queen Sugar can never be called predictable, outright, you can see patterns and project where things are going as you catch the rhythm of the show. So here is hoping as we see a shift in focus, there is a feeling that the writers feel challenged and bring us new angles, new stories, and figure a way to talk about the effects of COVID-19 in a way that makes it so the drama can expound on the truth without being too much to bear.

Nova Not Pushing For More Answers Out Of Calvin

It’s understood that Calvin represents a blind spot for Nova. If not an exception due to how she publicly, and privately to some degree, lives her life. However, between Hailey speaking in anger and Calvin noting what she said was true, and considering the history of Calvin and Nova’s relationship, more questions should have been asked.

Yes, Calvin has been with other Black women, but under what circumstances? Was it also while he was married? Heck, was it after he started seeing Nova? He says they don’t compare, and she is the only one he loved but, he got married and had multiple kids with Hailey so, while romantic, should his statement be taken with a grain of salt? To us, Nova let a lot go by which should have been poked and prodded more because the color of this red flag is to bold and the flag itself too big to ignore.

Is This The Beginning Of The End For Micah and Kiki?

When Micah and Kiki met they were teenagers, and Micah just came to St. Jo and Louisiana. So the idea of them growing apart sucks but, it makes sense. However, it’s our hope that if they break up, they remain friends, and even if they date other people, they end up back together. We know subscribing to the “End Game” idea isn’t always best, but if any two characters, beyond Ralph Angel and Darla, we’d want to see be together in the end, it is Micah and Kiki.

Just When Things Were Getting Good For Darla 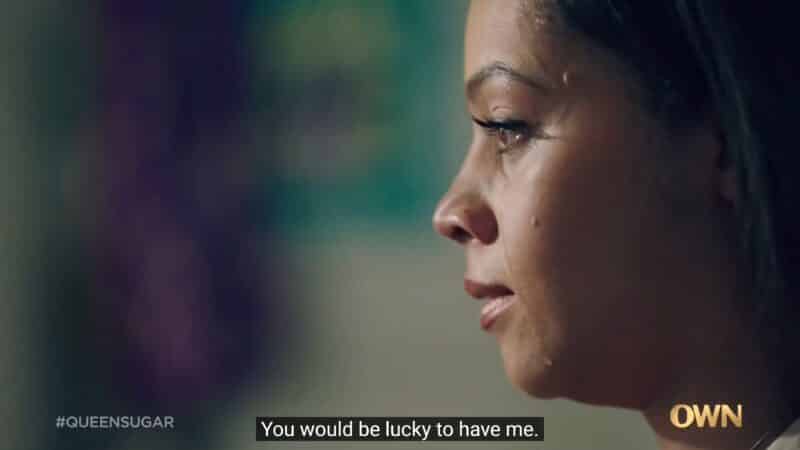 Darla: You would be lucky to have me.

Is it just me, or just when Darla seems to be hitting a stride, making a breakthrough, having some sense of normalcy, something happens to upend that? Am I alone in thinking this? Also, join me in this thought, if it wasn’t for COVID, and the influence that’ll have on the season going forward, what would have happened with Darla? Would she have gotten the job and done well or floundered? There is something about how the character is written that makes it feel they are constantly humbling her, or karma is whooping her ass for something she long paid for.

So here is hoping, despite it seeming she’ll be furloughed or laid off from her job, Darla only experiences a temporary setback and not the major ones she usually does which trigger trauma or create new traumatic experiences.

Just When Things Were Getting Good For Darla - 72%

Is This The Beginning Of The End For Micah and Kiki? - 76%

Nova Not Pushing For More Answers Out Of Calvin - 74%

Between COVID and Charley Going To War With Parker and the Beckington Group, I Prefer Covid - 87%

As COVID-19 encroaches on St. Jo, so comes the feeling we're about to see multiple characters go through hell to survive. Not just physically, but mentally and emotionally as well.

Sometimes I think BL isn’t necessarily trying to be a lead or star of a show. Considering she has l o n g paid her dues, I do wonder if maybe she wants to be a supporting character and not have the responsibility of the lead. But we’ll check out her IG when we get a chance.

But yeah, with Darla, it’s like, sustainable growth doesn’t exist. Just when you think she hits a goal post, they send her back in some aspect of her life. Leaving you to question did she really make progress when she always is backtracking to fix something that wasn’t broken before?

The writers really can’t let Darla win. Everything has to be a struggle, a setback. Although Darla’s anxiety during that scene was palpable. It seems like Darla can’t have a balance going on in her life at the same time. When she has good things going on with RA and Blue her professional job/career is in turmoil. When she is doing well professionally with her job, her relationship with RA and her being a mother towards Blue is being questioned. It sucks and I will always say that Darla’s setback even before Covid was because of Nova. Darla was doing so well before Nova’s dumbass released that book. It really was like a domino effect on her life and on her sobriety. I just want Darla to do well and be happy. I hope that we get to see her parents again at some point as well.

Also you need to check out Bianca’s Instagram lol she is showing out. As much as we love QS I really hope that season 6 is the last season just because I hope/want for Bianca to have more time for herself so that she can do more things. Like I said I believe that Bianca should be so much bigger than what she is. I need her to be in a high budget movie lol