Wherever I Look
Recaps, Reviews, and So Much More
Home TV Series Queen Sugar: Season 3/ Episode 9 “The Tree and the Stone Were One” – Recap/ Review (with Spoilers)
TV Series

Queen Sugar: Season 3/ Episode 9 “The Tree and the Stone Were One” – Recap/ Review (with Spoilers)

Trust is a major focus as many become shocked by what is asked of them, whether understandable or just a Grade-A insult.

The ever persistent Jacob calls Charley and sets up a meeting between him, his mom, Frances, and her. Said meeting is about not only stopping the prison but taking Sam down. However, Charley feels wary about the idea for Frances being willing to stab her brother in the back does lead to the question if she’ll stab Charley in the back someday. Even if she is setting Charley up to increase her shares of the company by poaching Colton, Sam’s sons, shares. Thus giving her increased voting rights.

As for Micah? Well, what started as them just doing some vandalism and having the names of people in bondage on the plantation goes to them burning down a shack. No one is killed and nothing but the shack burns down but being that he and his new friends were almost caught, and it is on the news, it is a big deal. 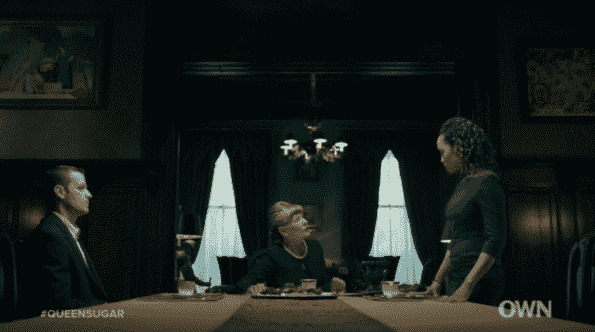 With eminent domain on the table, when it comes to the prison, Charley is between a rock and a hard place. Does she have money to fight a government push? Yes, but Charley hasn’t really build a network or influence. All she has is cash. Which leads you to question, with her desire to take down Sam so high up on her list, why hasn’t she started working on and with local politicians? Charley is a smart girl and that smile is the heart of her southern charm. So why is it, outside of that pageant Keke won last year, she hasn’t had some political events? I doubt she can woo Sam’s people but she could sure help some people replace them.

But, moving onto this Frances proposal, it could be a good deal for her. Increased voting power means she can at least stop the prison. Granted, if Sam loses power it means destroying the company is no longer an option but so comes the conundrum of before. Is it better to dismantle a system or infiltrate it and make it better for the people? For while Frances could pull something, by then Charley could have herself so ingrained in the parish that making moves against her could destroy the company. Just by the connections she gained which keeps the machine oiled.

Leading to this Micah situation. Honestly, I kind of lost interest. Him trying to explore what it means to be Black after being raised in predominately white spaces was the hook to me. Even making friends who aren’t affluent and are sort of hood. But, as much as I get the point is showing youth activism, it just isn’t that interesting to watch them. It’s either kind of a bore or you got your eye on Micah and Asha since you can foresee some kind of drama being started between them.

The time has come, the walrus said, to speak of custody agreements. One in which Darla wants a 70/30 split in her favor and Ralph Angel is pissed. Which is understandable since 50/50 was on the table before but it seems between Darla, or her lawyer, she knows she can tip things in her favor. Not to attack or piss off Ralph Angel mind you. It’s just, as noted, Darla has been at a disadvantage. Between her addiction, job stability, and housing, she couldn’t really take on the role as “mom” in the way she wanted to. Now she can and she wants to use her leverage to do so.

However, Ralph Angel isn’t taking this and it seems he is ready to fight and with him bringing Nova and Charley into this, you know this fight is probably going to get nasty. 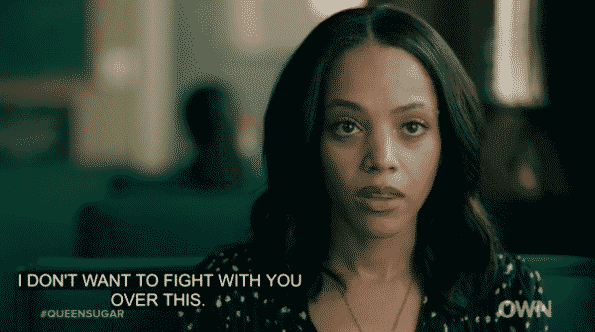 Darla: I don’t want to fight with you over this.

I blame Aunt Vi, Nova, and even Charley for the custody issue. Darla’s main problem, in my mind, is that she knows his family will always treat her like trash. So, in that 50/50 scenario, taking account how many jobs Ralph Angel works, and because he was planning to date Trinh, that would mean his 50% would be split up between Aunt Vi, him, and sometimes Nova. And really, why would Darla, at this point in her life, deal with people who act like they do when she doesn’t have to?

But, I will admit, being that we know about most of Ralph Angel and Darla’s skeletons, this doesn’t come off as that interesting of a storyline for either of them. For Ralph Angel, him dating Trinh was more interesting for it introduced a different culture to the show, alongside one rarely seen on TV. This Darla mess is just another eye-roll inducing part of the Blue paternity saga.

Then, with Darla, there is such a desire to see what her life is like outside of her back and forth with Ralph Angel. Like him, you just want to see her co-parent and move on. Let us see what work is like for her, trying to be social, maybe date even. She is someone who was raped and they could explore what it means to date someone new, especially the way dating is now, when you have that in your past. Heck, they could show her going to therapy, if they want to hold off the dating thing. Much less, there is also her going to school and developing how she is bettering herself to be worthy of primary custody.

Unfortunately, though, Queen Sugar seems to more so be pushing what is expected over what would push the characters and story forward. Especially in ways which makes it so the best is yet to come vs. behind us.

As Aunt Vi and Hollywood secure the location for their wedding, as well as Aunt Vi securing an agreement for her pie shop, the Remy situation comes out. To say the least, Charley isn’t happy but she doesn’t pursue the usual family way of handling things. She communicates she isn’t necessarily happy about the situation, but Nova is forever her sister. As for Remy, who has the gall to come to Charley’s new house to talk about it, she just notes him and Nova’s relationship is fleeting. Especially after this dude says they weren’t working out for a while and he wanted to fix things, or whatever. Basically, he tries to offset a few their issues onto Charley. Leading to her just saying he is fleeting and he better not hurt her sister.

But, in non-Remy drama, Nova’s agent says The New Yorker wants to publish one of her articles. Also, Hollywood is thinking of owning a sports lounge and maybe a construction company. 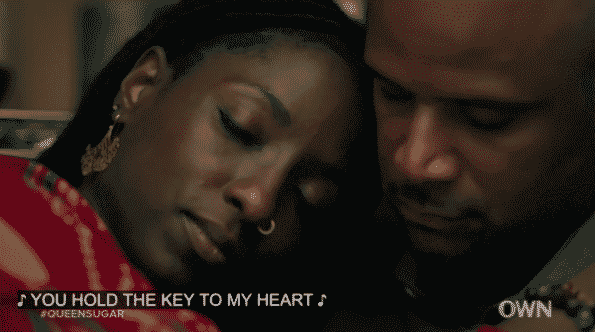 Lyrics: You hold the key to my heart.

I think one of the reasons Queen Sugar, for me, seems like it is becoming like every other show is because the relationship drama gets far more attention than the stuff which moves a character forward. For example, while typing this, I forgot about Hollywood talking about his dreams and Nova having the opportunity to have her work in The New Yorker. Why? Because those storylines are usually sub-plots. More time and effort is put into Nova’s latest relationship pending disaster than her work. In fact, her work seemed to be the bridge to her getting with Remy. It may even lead to her seeing her season 2 love interest again for you know they are bound to run into each other eventually.

Then with Hollywood and Vi, as strong as they are right now, you see how the strength of their relationship, and Hollywood’s relevance, is in how much he is needed. The more focus there is on Vi having her own thing outside of him, the less you really feel the need to take note of Hollywood. It’s basically like the loop Darla is in. If it doesn’t deal with being Blue’s mom and Ralph Angel’s ex, she doesn’t really exist. There is no autonomy and life of her own. She may speak of it, and something may happen off-screen, but not front and center.

Which, I know, they can’t include every last development for this show is only around an hour. But the issue remains, Queen Sugar is aging like it is a 24 episode per season series. It’s only season 3 and the cracks are starting to show and patterns are forming. Patterns which show how human these people are but considering the moves made, like Blue’s paternity, Davis cheating again, and Charley kissing Jacob, increasingly there are little things done which seem to be more about getting attention than maintaining attention. But, it is a TV show and they got to keep the ratings up. So, they gotta do what they gotta do.

Folks like us, we get so used to working all our lives just getting by that we don’t know what to do when getting by ain’t our everyday no more. – Violet