Nearly everything goes to hell. The Mill is in trouble, due to slander, the Blue paternity situation rocks everyone and, even Micah is in trouble.

Previous Recap: Episode 14 “On These I Stand” 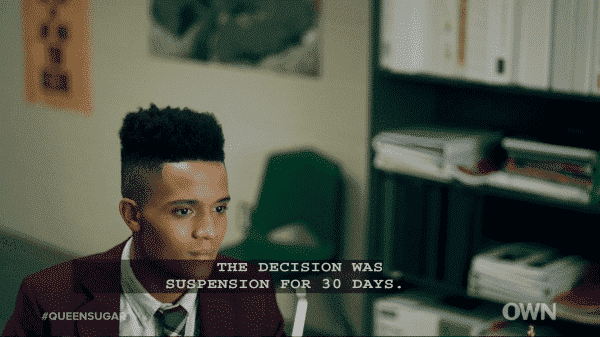 After pointing out the glorified confederate memorabilia and speaking to Keke about it, Micah decides to do something. Not protest outside the school, do an e-mail blast or anything, but simply post a passionate letter on every student’s locker. Something that works but with it rattling a few parents, it ends up getting Micah suspended. He gets suspended for 30 days due to “vandalism.” Which, I don’t know about you, but after 18 days back when I was in high school, that meant summer school or repeating a grade. They gave Micah 30. How in the blue hell is he supposed to bounce back from that?

Though there have been many times this family came together for a joyous occasion, more often than not it is to try to regroup after a blow hits a member. In this case, it is Ralph Angel being under the belief Blue isn’t his. Something he states as fact and not under Darla’s words of Blue might not being his. Which, no sooner than Darla can even be suspected of wrongdoing does Aunt Vi pull a 180. All that, “You family now” and that jive she has been talking, thrown out the window, ripped apart by the dog, and blowing in the wind.

But while for Aunt Vi it is just words, Charley takes action. Despite all Darla has helped with when it came to running the mill, despite the personal connection she and Darla built up, she is fired and Charley seems surprised she even came to work. Though considering what the Landrys end up doing, it seems she may regret firing Darla. If only because Remy, and the new recruit to the cause, Nova, can only do but so much. For while they are out on the field, fighting off rumors and putting out fires, who is doing the administrative tasks at the mill? Making sure people get paid and what not?

But that is for the next topic. What matters here is that while most consider it Darla hunting season, Hollywood remains the only one willing to check on the girl. Perhaps taking into consideration the courage to tell the truth, no matter how dumb it was to bring to light. Though, all things considered, with her man refusing to talk to her, her new family disowning her, even being petty enough to fire her from a job she is good at, could this break Darla? Blue is still the family’s baby but can you accept the baby while disowning the momma? One more chance is given to Charley to make peace. To declare some sort of stalemate since she got 40-50% of the Landrys farmers from under them. However, with every moment Charley thinks she has that damn family on the ropes, she lets them know she is going for that TKO. Leading to them, as they always have, trying to make a comeback. Before it was by pulling leases, or threatening to, and now it is spreading rumors about issues with the mill. The kind which people in Nova’s circle are trying to follow up on and publish.

Which, all things considered, makes her trying to have one of them push this idea of harassment to be funny. After all, is she not a journalist? Isn’t this a civil rights issue? Granted, it being so close to home could imply bias but then you can factor in a few things about the Landry family. You can talk about their history. Their family probably owned a good portion of the men and women working the land under unfair practices. There can be articles about the monopoly they make sure is held tightly and even all the things they did to stomp away pride or competition. I mean, we know Nova has got a lot of mouth so why is it just now she is joining this fight is beyond me.

But, at least it isn’t just Charley and Remy’s anymore now. Because while the dynamic duo has been holding it down, it is becoming clear that mixing business with pleasure is putting a strain on their relationship. For while Remy may trust the results Charley can get, you can tell her worries about the method. And considering how Charley handled the woman blackmailing Davis, we know all too well that calling Charley “calculated” isn’t an insult but who she is. So with her working with the Landry’s black sheep and really gearing up for a fight, it is going to be interesting to see what survives after the dust settles.