Finding a way to go beyond surviving but absolutely thriving is either what is pursued or talked about. Though for some, thriving is a suburban fairytale.

It has been a little over 3 weeks since Blanca started her house and after beating Elektra, her son Damon comes across Ricky. A boy enamored enough with House Evangelista to want to speak to Damon, but not enough to join. Which is fine by Damon because Ricky is cute and asks him out. Something that leads to a very cute evening that Ricky tries to end with sex, but Damon isn’t ready. Though, according to Lil’ Papi, that might have been for the best since Ricky is the hit it and quit it type.

Something Blanca doesn’t know, but with her son being naïve and a bit innocent, she has a birds and bees talk – gay edition. Which is rather sweet, and as maternal as we have ever seen Blanca. And while Damon does stand up Ricky to be with his teacher, who is impressed by him, they reconcile and go to the ballet together. Meaning, Damon may have a little boyfriend. 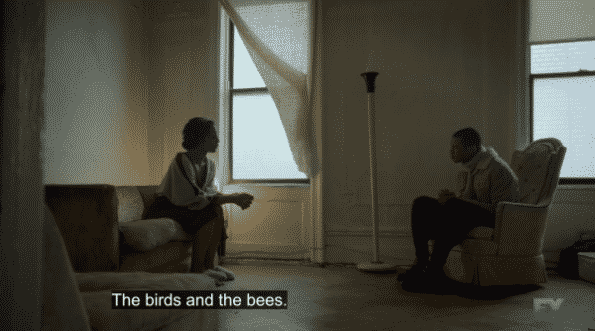 Blanca: The birds and the bees.

Recognizing this is a drama, I actually do sincerely hope, like how Damon so conveniently got into dance school, his relationship conveniently will have only regular drama. I know AIDS is in the background, and Ricky might be a player, but Damon is so innocent. On top of that, coming of age stories, alongside first romances, featuring LGBT characters don’t often have happy endings. Often they end with things being better, but still a struggle.

But can we give big ups for Ms. Rodriguez as Blanca? While her theater background kind of pokes out every now and then, there is no denying that as a maternal force, you envy her children. She will go to bat for you and somehow get your underserving behind into a fancy school. Yet, she can also be frank, but sort of coddle you too. Give you the sweetest speech you’d ever hear and I know some queer people probably wish their sex talk was like Damon’s. Even if the talk needs a part 2, maybe 3.

I’ve Been Waiting For A Girl Like You: Stan, Angel, Matt

When it comes to Stan, he has spent most of his life now checking off boxes and being who others think he should be. With a life like that, someone like Angel is an anomaly. For while it is the 80s, when punk, grunge, and being flamboyant was available, Angel was different, is different. To be who she is, and he makes it a point for her to be referred to with female pronouns, she has to make an effort, fight, and deal with people saying what she is not. This is an admirable trait. Which isn’t to imply he doesn’t admire and love his wife, but he is a moth to Angel’s flame.

Problem is, he can’t really afford to keep his wife happy and meet the expectations Angel has if he is going to talk like her boyfriend yet not be consistent. So, he speaks to Matt about a raise and damn if he doesn’t get it. Albeit at the cost of his weekends, and Matt wanting to know the absolute truth, but with that Stan’s wife gets a dishwasher and Angel? Well, she gets an apartment.

Leading you to wonder, does that mean she’ll leave Blanca’s house beyond participating in balls? 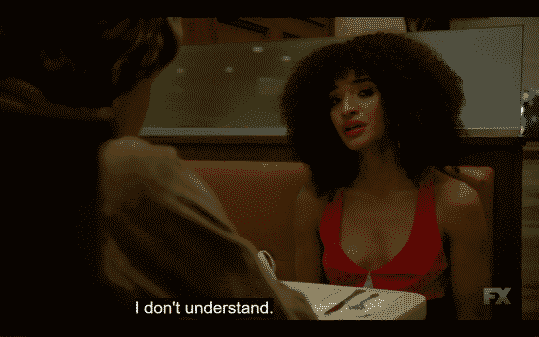 There is something about Angel’s story which makes me think of producer, writer, and director of the show Janet Mock. Though Stan is nothing like her husband Aaron, there is something about them both, while now formerly, sex workers and how Angel is comfortable in who she is but not as a partner which is interesting to me. For as Mock said, with me paraphrasing, giving her body over is nothing since there is some sort of disconnect. However, her heart? That is a far more complicated task.

I feel this is especially seen with Angel trying to figure out what is Stan’s play here. Yes, he is married, but he is married and not gay, not trying to get Angel to go down on him or anything like that. He pursues conversation, treats her as a mistress that he’d be with if only he could. And in a twisted way, Angel seems flattered. For while Prince charming is far from perfect, when you know better you do better and all Angel has known is rejection and Johns. So a Stan is a nice change of pace.

Blanca catches a lucky break and actually defeats Elektra at a ball. Which, as you can imagine, pisses Elektra all the way off. Especially since Blanca takes the win and runs with her tail behind her legs – not giving a chance for Elektra to redeem herself. But, don’t solely look at it as cowardice. It seems, in a way, while the Ball is everything to some, Elektra wants her children to have more than that. So, she tries to integrate, for a lack of a better term, a local gay bar which does not appreciate trans people. In fact, the owner has her arrested.

Leading to Elektra bailing her out. Something done not out of the kindness of her heart but because she wants her redemption. Something she gets in a win the following night, but the competition isn’t what matters here.

After Blanca’s win, she has a few conversations with Elektra. One in which there are a few underhanded compliments exchanged. Be it thanking Elektra for what her generation did or Blanca being commended on her stubborn tenacity. Bringing about the idea that while Elektra recognizes her as a mother, and commends her in a way, she is not on her level. Competition she maybe, but in a fair contest, Elektra seems to believe she’d win every time.

As @_Maleficentt said on Twitter, there is a serious need to know Elektra’s backstory. From a rich daddy,be it biological or of a zaddy variety, who seemingly paid for her to be so fish and femme, to becoming a house mother, while Pray Tell may say: 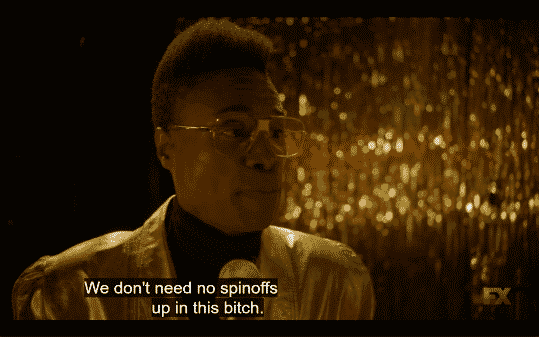 Pray Tell: We don’t need no spinoffs up in this bitch.

I hope we at least get some flashbacks up in this piece. Heck, not even just for Elektra either. When it comes to Pray Tell I’d also love to see some backstory. Though, to be honest, a part of me doesn’t think that will happen. Especially for the trans characters because I think the idea of this show is to use the platform to move things forward, show them fight and struggle in their present and only talk about the past. You don’t need to see them pre-transition, surgeries, and all that. I feel like there is likely the question of why is that needed, you know?

Much less, as much as characters may question who they are, they don’t want to enable those who watch the show to do the same. You came in at this point of their life and, as Edna Mode says, “I never look back, darling. It distracts from the now.” Which is what they want you to pay attention to.

“I felt the wind in my face my whole life. Which means I know when it’s at my back.”

“Rehearsal is getting ready for life, dancing is living it.”

“For an artist, greatness happens when you can take something organized and make it feel like it was improvised.”

“Technique is nothing if it doesn’t reveal some personal truth.”

“A victory is hollow if there’s no real competition.”

“I’ve […] learned how to keep my dignity, even when I’m kneeling down for scraps under the table.”

“You clearly didn’t appreciate my presence, my absence shouldn’t be any different.”