While Mrs. Appleyard’s past is illuminated, and why Irma’s mom is upset with her, the fate of Sara becomes the first noteworthy mystery of the mini-series.

Before I Let You Go: Sgt Basher, Irma

It’s about March and with Irma’s ship about to head out, Sgt. Basher has a few final questions. Not about the rock or picnic, he has more than enough information on that. What he wants to know about is the school and what it was like there. Well, Irma notes Mrs. Appleyard has no idea how to run a finishing school and hints to her being a drunk. Also, that none of the girls truly want to be there. Letting us, the viewer, know the school was definitely a place for misfits.

As for why Irma was there? Well, it is because she was accused of kissing her stepfather by her mother who thus saw her as a slut. Hence why her mother doesn’t talk to her, even though her stepfather made a move on her! Something more so known for our benefit than Sgt. Basher but with the note about the climate and how Sara was treated, it gives him evermore reason to put a more watchful eye on Mrs. Appleyard.

So, is this going to end with Mrs. Appleyard being arrested? At this point, even if Sgt. Basher sets aside she wasn’t at the picnic, taking note how there were rumors of a kidnapping, her mysterious past, owning a gun, and things like that, all the shallow evidence that would be inadmissible now would probably be enough then right? Plus, there is also Irma’s father having someone from Scotland Yard so, be it because of the girls who went missing, Sara, or Hester’s past life, I doubt things are going to be all that peaceful for her.

Where Is Sara?: Dianne, Mrs. Appleyard

The last we saw of Sara she seemed to be running away and all signs pointed to her running into Mrs. Appleyard in the woods. However, the next day, we are told her guardian, Mr. Cosgrove, collected her and she left without saying goodbye. Now, being that Mr. Cosgrove is a rather mysterious person, him coming out of nowhere and picking up his child, considering what is going on with the school, isn’t necessarily far-fetched. What is though, would be Sara not saying goodbye to someone of the staff, not bringing her Miranda portrait, alongside NOT TAKING HER SUITCASE!

Then, to really push viewers to think the worse, Mrs. Appleyard keeps seeing maggots over and over. As if she has a guilty conscience about what she did. However, we never get to see a body, no matter where Dianne looks or Mrs. Appleyard walks so, maybe there could be a chance Sara is alive? 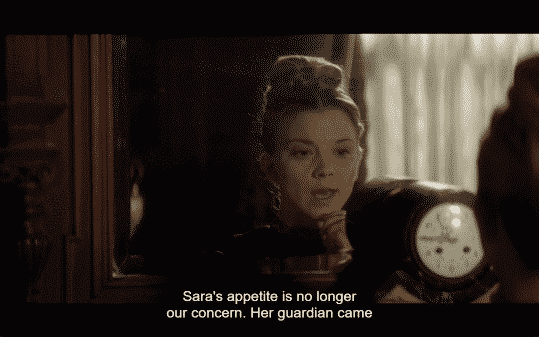 “Sara’s appetite is no longer our concern. Her guardian came.”

It’s quite upsetting that when you finally get into a character who is still alive on screen, they get snatched up and now they are part of a mystery. One which, like most of the other mysteries on this show, isn’t really handled in a way to make you wonder if she is truly alive or not. Because Mrs. Appleyard seeing maggots pretty much points to the idea Sara is rotting somewhere. And while scrappy, Sara doesn’t necessarily come off as the type who could survive on her own. But, who knows, considering Miranda, Marion, and Ms. McCraw are likely dead, maybe we’ll get a happy ending for Sara. It has only been one day of her missing.

Toss It All & Start Over: Mrs. Appleyard, Dianne, Ms. Lumley

With certain staff leaving to be married combined with the Easter holiday, it seems like the perfect time to fire everyone and start anew for Mrs. Appleyard. Which comes as a shock to Ms. Lumley since she quite liked working at the school but let’s be real, while good at punishing students, maybe bible study a bit, she wasn’t much use for anything else. Plus, Mrs. Appleyard wants to attract girls like Irma more so than the Ediths and Miranda’s of the world. How is she going to do so with Ms. Lumley types on her staff?

So, she lets her go and of course Dianne as well. Leaving Mrs. Appleyard all by herself to deal with her memories of Arthur finding her in an orphanage as a child, alongside his partner Tomasetti, her helping them steal, and their relationship becoming twisted. That is, him going from guardian to husband. Hence explaining why the idea of him being around haunts and repulses her. Well, it seems as thought in episode 1, Mrs. Appleyard and Sara’s stories are quite similar. Hence the love/hate relationship between the two. Also why she might have killed Sara in the woods. Maybe, despite following her younger self in this episode, she tried to kill that being to get away from them? And while I know it is rude to think about Sara considering Mrs. Appleyard is revealed to have been used by a pair of thieves, maybe even sexually as she got older, there is really no desire to care.

Which I would love to blame on the writing, but I’ll have to put it on Dormer for this one. Whether she is just not ready to play a central role or can only play a character within a certain context is causing issues here. Not to imply I have her typecast in my head, because of her role in Game of Thrones, but you know how some actors make you think great things will be on the horizon for them after a show is over? Yet, pretty much that was the height of their career? I do wonder if that might be the case for Dormer.

At least if she keeps making choices with her performance that mirror this show and picking roles that don’t play up her strengths but border on being campy.