To sum up the episode, Irma hates Miranda, has probably always hated Miranda and likely was only friendly towards her because she had to be.

It’s amazing what can happen in 6 years, isn’t it? In that matter of time, Hester went from one half of a possible con artist or thievery duo to the operator of a college. Yet, as hinted throughout the first two episodes, it wasn’t because she was some lady who wanted to instill certain virtues into girls. All of that is a ruse. One which was made possible by Arthur taking a bullet in the shoulder, Mrs. Appleyard robbing him, and digging her fingers into the wound to seemingly make it so he couldn’t immediately chase her.

Yet, it is believed he may have finally kept his promise to find her. Taking note of Benjamin’s comments on the past two episode, I can only assume this was added in for dramatic effect. Because, there is something so ridiculous here that I refuse to believe this was in the source material. And if it actually was, I just can’t wrap my mind around the idea of why? You have a full-blown mystery about where three girls and one woman are and yet we’re digging into the headmistresses past?

Was this done just to bolster the role to attract Dormer?

But What About Irma?: Irma, Michael, Marion, Miranda

From what it seems, the legs we saw did not belong to a dead body, possibly bitten or broken. Nope, they belong to a dehydrated Irma who doesn’t remember a thing beyond climbing the rock. Well, and how much everyone would fawn over Miranda. She had the nicest eyes, the nicest this, and everyone loves her dearly. Even Michael, Irma’s savior. Someone who she thought, if but for a day, would actually choose her over Miranda but he stands her up at dinner – the night he is supposed to propose. Only to leave a letter saying he is traveling to Miranda’s farm to see her folks.

But I should note, the issue at hand perhaps doesn’t just deal with Miranda and Mrs. Appleyard’s college. More so Irma dealing with the rejection which comes from her mother. Someone who is on her second marriage and has dedicated herself to her new husband. A person who either Irma’s mom is trying to start over with or something happened with Irma and she is taking his side. Making it where only her father cares and while she loves her dad, he isn’t her mom. 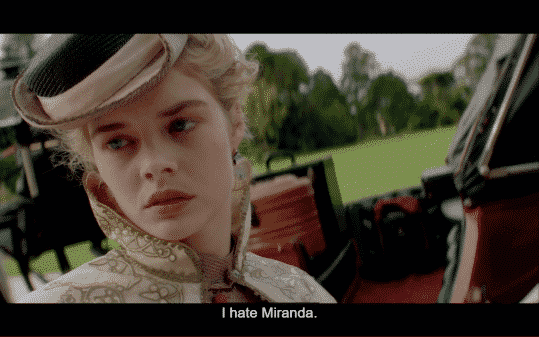 Was Irma supposed to act this weird after being found? I understand being dehydrated can make you a bit loopy, but then you have to take note of the spinning in the beginning before she climbed the rock. Though, maybe I’m not giving enough weight to her being an heiress? A person who may have barely a worry in the world so she could be stunted in a child’s mindset.

Yet, as much as I want to push that idea, then I remember how she was with Marion and Miranda in their semi-homoerotic moment of taking note of each other’s bodies. Much less her kissing Miranda seemingly just for kicks. Maybe to try to exert control. Never mind how she made sure to exclude Sara and the way she wanted to challenge Mrs. Valange in class.

Perhaps making it where it’s not that she has a child-like mindset but is simply childish. While very much knowing how she should be acting at her age. Though, lest we also forget, you can’t use 2018 standards to understand someone who came of age in the 1800s.

Naturally, with Irma being the only girl who returned from the rock, everyone questions what happened. Sgt. Bumpher since this happened in his district, Mrs. Appleyard because the result threatens her college, and Edith because she has a part in this too and misses her associates. Which of course leaves Edith quite on the defensive and maybe is why she fell for Michael so hard before he ditched her. From what it seemed, only he and the French teacher Dianne seemed to be on Irma’s side while all others just wanted answers. None of which dealt with how Irma was but whether Miranda was okay – which you know wasn’t something she wanted to hear.

Which is why, after the embarrassment at Michael’s, Irma really just wanted to go to her father, as commanded, and put this whole time in Australia behind her. However, after being pushed by Mrs. Appleyard, Dianne convinces Irma to at least say goodbye to the girls. Leading to Mrs. Appleyard trying to finagle what happened to Irma, under the guise of her getting a clean break and then there is Edith and the rest of the girls. Bad enough Sgt. Bumpher has shifted his focus to Irma but then the girls?

Well, let’s just say when you watch the scene, you’ll wonder if it is some weird hallucination vs. something real deal. However, with Diane slapping one of the girls, you realize it is true that everyone, including Ms. Lumley who brings up Irma being Jewish as part of her tyrant, is ganging up on Irma. Making it so, when she leaves, she says without regret that she hated Miranda. “Sometimes I do not understand what is happening anymore.”

If it wasn’t for the fact I really want to watch a Marion and Miranda focused episode, even Sara now that I appreciate how adorable she is, I would probably drop off here. For while Irma leaving the show is a bit of a blessing, so comes the issue of how she didn’t add to the mystery as much as piled on more nonsense. For the shimmer she kept seeing, which possibly came from the rock, that isn’t talked about.

Nope, instead most of the episode focuses on Mrs. Appleyard’s secrets, the fact that Mrs. Appleyard apparently hired questionable instructors, and Irma being a jealous ninny. Which is handled in such a way that the only way you could say anything positive about it would be if this show was meant to be a spoof. But, if this all should be taken seriously, then all you get is what seems like bottom of the barrel daytime soap opera acting and writing.

Especially that scene when all the girls, and Ms. Lumley, were ganging up on Irma. Watching that made me want to seek out some interview or behind the scenes video on what led to that idea. Because, if you were on the fence about this show before, and Miranda, Marion, or Sara didn’t make for a good enough IV to keep you going? That would have been what effectively killed your interest.

You can’t own what you don’t understand.

I kind-of disagree, and would just like to imply that in my personal opinion Irma’s ‘hate’ for Miranda is made up and she actually likes her, as you can see in the kiss scene – and perhaps is attracted to her, which is where I pick up signs of repressed sexuality. You also see that she is annoyed by Marion’s closeness with Greta, perhaps at Christmas thinking that lesbianism is unnatural and resenting herself in order to fit in with society and her parents, who are shown not to eagerly care for her. Though none of this is included in the book, it interests me and I think it is a smart way of demonstrating homoerotic undertones at this point in history. I also see signs of Irma’s repression in her over-the-top speaking of needing a ‘fine man to please her parents’ and her decision to attempt to voice attraction to men to teachers, such as the French one at the rock in the show. I also see this in her jealousy of Miranda’s inkling of an attraction to Mike – she may not be jealous of Miranda, but jealous of Mike.
This is just my personal view, but I think this a much more in-depth study of the characters presented in the show; separate from the book and the original in many ways. I like to believe this is what the show were trying to hint at, and if they did not it doesn’t make sense to me. Irma kisses Miranda, smiles, kisses her again, is turned down, and then tries to kiss her again, and is shunned, left silent, reflective and disappointed. Later, she states she hates Miranda. This, to me, is repressed sexuality at its finest.

Just a short post to confirm… everything that you found annoying in this episode is completely made up for this series and there is no equivalent scene in either the novel or the 1970s movie.

Appleyard is an older woman (late 50s or early 60s), but not much information is given about her background. All the information the novel gives is that she immigrated from the UK and has an upper class demeanour. She isn’t really a major character in the novel or film anyway… all this stuff about her being a criminal posing as a lady to escape her ex and her sordid past is an invention of the series I found rather implausible… and I’m kind of glad you (someone unfamiliar with the source material) thinks so too. It confirms that it wasn’t just loyalty to the novel that made me dislike this added twist in the tale.

Oh, and all that stuff about the beating and lesbian frivolity? Totally made up for this series too. Presumably this was added to pad out the run time and titillate the audience.

Both the book and 1970s movie hint that Miranda has an ethereal beauty and exceptional charisma that draws people to her, and that in Sara’s case it might’ve been romantic… but they don’t gush on about it like they do in the TV series.

And yes, Irma does act weird after her return from the rock. But in the 1970s film it is somewhat more subtle, like she’s become cold and emotionally desensitised… rather than her reverting to a childlike state as she does in the series… and in the 1970s film it is left ambiguous if her amnesia is real or not… I don’t know if viewers of the series unfamiliar with the source material might’ve wondered if Irma knew what happened and just isn’t telling them.