In a Keyshawn, aka Miss Mississippi-focused episode, we see the circumstances which led her to the Pynk, Derrick, and the end of her partnership with Rome.

Before Derrick became Keyshawn’s boyfriend, he was just a cheer squad member with Gidget and Keyshawn’s step-sister Alisha. Now, how did Keyshawn get a step-sister? Well, thanks to her father, James, cheating on her mom with an airline stewardess Chanisse. Thus leading to Keyshawn inheriting Alisha and Laronica.

Now, Alisha is cool, for the most part, Laronica to a point, but Chanisse is a piece of work. She tries to make Keyshawn the Cinderella of the household, but Alisha isn’t for it, and Laronica? Honestly, her long-standing beef with Alisha over various things doesn’t really put Keyshawn on her radar. Plus, considering James is messing around with Alisha, maybe Laronica too? Keyshawn’s sisters have more of a reason to hate their mom, who is very beauty-focused, or their stepdad, who wants to exploit their beauty, than Keyshawn, who generally is quiet, nice, but a bit bougie.

What led Derrick to become part of Keyshawn’s life was him defending her honor against boys who made fun of her, and then showing up as some kind of white knight after Chanisse wanted to ruin her Christmas. However, Keyshawn getting pregnant ruined both of their lives. For Keyshawn, it led to James and Chanisse abandoning her, and for Derrick? He was disowned by his dad and received minimal help from his mom. Hence, both went from middle-class, if not upper-middle-class homes to being damn near broke.

However, the story doesn’t take us to when Keyshawn met Uncle Clifford. Rather, the recap of the past ends with Keyshawn being choked by Derrick for the first time, rejected by her family, and being welcomed back home with a grandeur gesture. One that has perhaps become all too familiar for Keyshawn.

After all, in the present-day, not much has changed. Derrick is still abusive, and while Rome seemed like he was a white knight, he proved himself otherwise. He creates an opportunity to get Keyshawn alone, away from Lil Murda and Big Teak, Woddy as well, and tries to rape her. He even dangles releasing Lil Murda and Big Teak’s sex tape to get Keyshawn to comply, but she fights him off and runs to Woddy, who she tells everything. Perhaps with the mindset of thinking, because he is calm, cool, and generally collected, he is someone to confide in who won’t do anything rash.

She was wrong. Woddy, while not into the gangster s***, he does still associate with those who do, and as much as he may appear to be an angel, one must not forget that angels are the hand of God, and God can be merciless. Case in point, Woddy murders Rome by having him sniff two lines of fentanyl, under the assumption it is coke. And to add onto how wicked Woddy is, he watches, guides him to death, and walks out of the room like it was nothing to him – likely because it wasn’t.

And while Keyshawn isn’t clued into Rome’s demise, it does seem she finds strength through what Woddy did. For when she returns home to Derrick, who has been abusing their eldest, she decides she is going to threaten Derrick with leaving. This leads to violence since Keyshawn doesn’t just announce she is going to go. She decides to hit some low-blows first, which almost leads Derrick to put an iron to her face.

But, there is hope. Going by Uncle Clifford’s narration, maybe this will be the final thing that needed to happen for Keyshawn to wake up?

Appreciating An Episode Focused on Keyshawn

Admittedly, of all the characters we’ve met, Keyshawn isn’t at the top of the list of characters whose backstory was most desired. Uncle Clifford would be up there, Mercedes, maybe even Lil Murder, to see his coming-of-age tale which led to him discovering he likes men. Keyshawn? Between Derrick and how bougie she is, there wasn’t a strong interest there.

However, that doesn’t mean we don’t appreciate what was delivered. By meeting Keyshawn’s family, sans her mom, we got a sense of what her foundation was. She was a girl who knew she was beautiful because of her looks, but because she was just a few shades darker than what many desired, she didn’t know how beautiful she truly was. Plus, with partly being raised by a wicked stepmom like Chanisse, and a molester of a dad like James, who knows how deep they drilled all types of trauma, insecurities, and poison in her? The kind which makes people like Derrick seem so sweet and has you blind to all the red flags popping out of their heads.

After all, in a segregated town, getting with someone like Derrick is a dangerous choice. For while love is love, love is a finite resource that depletes day by day and needs to be replenished. Which for many couples, as Uncle Clifford notes, love and lust can easily be confused. Especially considering lust is like money, you can burn through it quickly. Then, considering Derrick lost his white privilege once he got with Keyshawn, or specifically, when he got her pregnant, you see how the quick-burning lust is for surely what they have was not the slow burn of love.

Yet, what were Keyshawn’s options? In life, she has often sided with what is comfortable or what would allow her a certain lifestyle. Hence her being with her lying, cheating, and molesting daddy over her momma. Also, it is why she stuck by Derrick, even when she found The Pynk and Diamond. What Keyshawn wants is what she grew up with. Which, as increasingly shown, isn’t just the money, but she wants some sense of family. She wants a mother and father in the home, kids who seem happy, despite how things actually are and is that perhaps a fairytale Keyshawn has been gripping too tightly? Yes.

But here is the thing, at The Pynk, Keyshawn was allowed to dream, and with Rome, it seemed like her dreams were coming true. And it is one thing when you are consistently denied living what you consider your best life to the point you are coerced into settling. However, if you get to be happy, know what you can achieve, and have it? That makes it difficult to turn back, and you will sacrifice your mental, emotional, and even physical health to have some semblance of what you had even just a taste of.

That is why Woddy probably had to kill Rome, since he knew there could be a chance of Keyshawn returning to him, Rome, to try to maintain this cash flow. For if there is one thing Keyshawn needs more than ever, it isn’t a white knight, someone she can become dependent on, but simply someone who doesn’t need or want credit or a reward. They just want to do right by her.

This episode almost pushes you to wonder why Uncle Clifford doesn’t narrate what’s happening more. Through them, we’re given Keyshawn’s humanity and pushed to understand people like her who just get or feel stuck and struggle to escape to a better situation. There were comedic moments, but they kept it real, and overall, it furthered the idea Uncle Clifford is like a fairy godmother to these ladies, and while they don’t make wishes come true, they at least send you off better than they found you.

Woddy doesn’t get enough credit for all he does. While he isn’t the best manager, he still invested in Lil Murder, despite knowing the challenge of getting a gay gangster rapper to the big time. He even brought on someone who he probably knew was Lil Murder’s ex since he knew that love would allow his dude to get the best security. Also, it would give someone with a record a job, which is always a blessing.

However, it got taken to the next level with Keyshawn. Just those two having a moment when they looked at each other and spoke telepathically showed a connection beyond general Black people looks to confirm something. Though we haven’t gotten to see them talk and build a relationship much, it seemed he knew what was up with her and Rome but didn’t want to overstep until he knew it was time.

And damn, when he showed himself able to not only kill someone but watch? Hell, even talk them through it? That showed us why Woddy is as much of a G as Lil Murder and Big Teak, despite creating the appearance he is a square. The only difference is, he doesn’t need something flashy like guns and bullets flying. He is down for something subtle, personal, and guaranteed fatal. 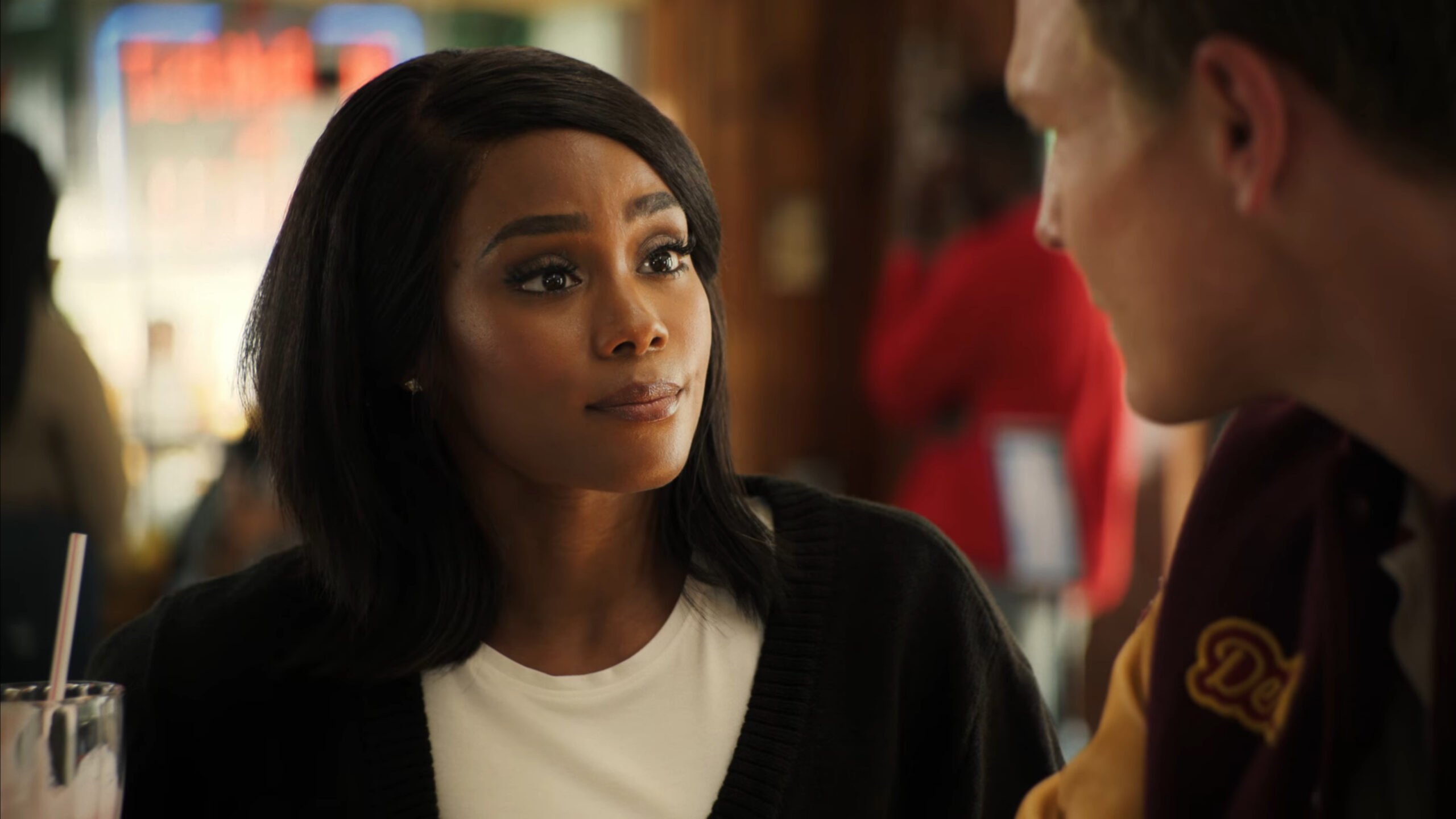 P-Valley: Season 2/ Episode 5 “White Knights” – Recap/ Review (with Spoilers)
Overall
“P-Valley” delivers an episode you didn’t even know you needed by giving us Keyshawn’s backstory and plotting out the road for her future. This includes a dark angel in Woddy who surely may help, behind the scenes, help her forge a new path.
Highlights
Appreciating An Episode Focused on Keyshawn
Uncle Clifford’s Poetic Narration
Woddy
Disputable
85
Follow Wherever I Look on Twitter and Instagram, Like us on Facebook, and Subscribe to the YouTube Channel.