Once again, Elliot is at war with Mr. Robot but it is hard to say if anyone remains on Elliot’s side.

It has been a week without electricity and Elliot was unconscious for 6 days. With him knocked out came a pause to blowing up E-Corp’s recovery but Whiterose has faith. After all, like Angela, it is the death of a parent driving Elliot and with that, so be there a will, a way will be either found or made. However, now Elliot is trying to close the backdoor he made, and nearly got Angela arrested to make. Something Darlene helps him do.

Problem is, a new character (yet to be named), a representative of Whiterose, doesn’t want that to happen. Darlene on the other hand, being that Dominique is on her ass, wants Elliot to not only stop what was in progress but reverse it too. After all, she is being attacked from both sides and fears Elliot could be next. Add in Cisco died and that makes Elliot the only person left in her life. Well, that she is close to anyway. 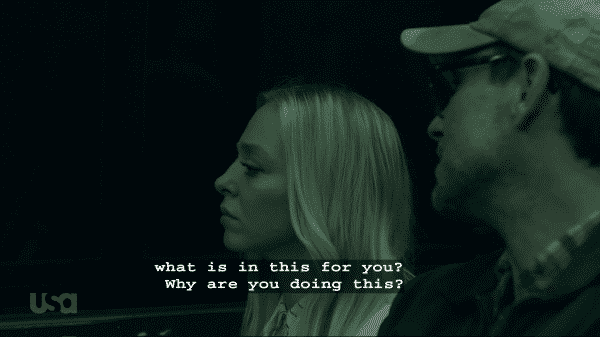 However, when it comes to Elliot, he doesn’t necessarily count Darlene as someone he can trust. Perhaps due to her reckless actions in the past. If not, in his mind, her not knowing the difference between Mr. Robot and himself. Something he thinks Angela can decipher between so he trusts her to help him stop whatever Mr. Robot may do.

Problem is, after her meeting with Whiterose, Angela now has faith in everything Mr. Robot has done thus far. Leading her to play Elliot for a fool while assisting Mr. Robot in his tasks. Which leads Mr. Robot to question if he can trust her but with her, like Elliot at a time, desiring to get revenge, it seems this qualms Mr. Robot, for now.

A Slow Start/ One Voice of Many

As noted in the season finale of season 2, the show no longer really has that “blow you away” quality anymore. The dialog, as the American political landscape has changed, doesn’t make the show seem timely but just another voice echoing off the walls. And with the show straying away from Elliot’s mental issues, and things like that, and being very political, as the whole show has been, so comes the need to ask, “Is Mr. Robot” really saying anything we haven’t heard before? Much less, heard better, more concise, and less all over the place like a dog chasing its tail?

“When we lose our principles, we invite chaos.”