Wherever I Look
Recaps, Reviews, and So Much More
Home TV Series Maniac: Season 1/ Episode 3 “Having A Day” – Recap/ Review (with Spoilers)
TV Series

Maniac: Season 1/ Episode 3 “Having A Day” – Recap/ Review (with Spoilers)

Remember Dr. James, from the commercial with Dr. Robert? Well, he is reintroduced and, as a bonus, we learn why Owen was committed.

Table of Contents show
1 The Suicide Attempt & Olivia: Annie, Owen, Dr. Robert
1.1 Commentary
2 The Return of Dr. James Mantleray: Dr. Fujita, Dr. James, GRTA, Yoda
2.1 Commentary
3 Pill B: Annie, Owen
3.1 Commentary
4 Question(s) Left Unanswered
5 Collected Quote(s) & .Gifs
6 Highlights
7 Low Points
8 On The Fence
9 Follow Wherever I Look on Twitter, Like us on Facebook and Subscribe to the YouTube Channel.
9.1 Maniac - Episode List Watch Only on Netflix Season/ EpisodeSynopsisSeason 1/ Episode 10 “Option C” [Series Finale]Maniac concludes with not much in the way of fanfare but Annie, as usual, being the catalyst for a rather sweet moment. Season 1/ Episode 9 “Utrangatta”We come to the end of Phase C and it’s an emotional end for Annie. As for Owen? Well, while it lacks emotion he does get to be a hero. Season 1/ Episode 8 “The Lake of the Clouds”As we get to see the rise and fall of a theoretical Owen and Olivia relationship, Annie is given an ultimatum by GRTA. Season 1/ Episode 7 "Ceci N’est Pas Une Drill"We may FINALLY begin to really address the topic of Olivia as Annie is stuck in the fantasy world of Ellie’s dreams. Season 1/ Episode 6 "Larger Structural Issues"In order to prep for Pill C, the GRTA situation is addressed. Alongside Dr. James’ issues with his mother Dr. Greta. Season 1/ Episode 5 "Exactly Like You"We come to the end of the Pill B arc and, naturally, with it being Owen’s episode, things transition to addressing his issues – like Olivia. Until Annie upstages him. Season 1/ Episode 4 “Furs By Sebastian”The only way to make sense of “Furs By Sebastian” is remembering the point of Pill B is finding a subject’s defense mechanism(s). Season 1/ Episode 3 “Having A Day”Remember Dr. James, from the commercial with Dr. Robert? Well, he is reintroduced and, as a bonus, we learn why Owen was committed. Season 1/ Episode 2 “Windmills”Focusing on Annie helps Maniac rebound from a lackluster premiere. Especially as we learn how and why she got into the trial. Season 1/ Episode 1 “The Chosen One!” The only reason Maniac presents to continue past episode 1 is your loyalty and faith in the actors. Not their characters or the story.
9.2 Maniac - Episode List
9.3 Check Out Other TV Recaps

With Annie having taken the A pill many times, thanks to Dr. Robert’s son, and Owen not taking the pill since he thought Annie was sent by Grimmson, aka Owen’s weird version of Jed, they both get called in. For Owen, he is forced to reveal what he says is his most traumatic moment before being forced to take the A pill and tell the truth. The story he tells Dr. Robert is when, 7 months ago, he tried to commit suicide rather than be blackmailed by Jed into testifying for him.

As for the truth? Well, after Dr. Robert confronts Annie about her use of Pill A, he dies, and this pushes Annie to call Owen into the office to be lookout as she makes sure they both can stay in. During that, he reveals his actual most traumatic moment deals with a woman named Olivia. A girl he believed liked him, but he came to believe his parents paid her off. Which he confronted her about and it just led to him screaming until he was committed. I’m starting to think Jonah Hill’s role in this is going to be one disappointment after another. Would it have been so wrong to see this Olivia story, assuming it was 100% true, come to life? That thought aside, I do wonder if the weirdness of this show may eventually become a liability. For while this is noted to be a comedy, I don’t get the sense we have had a single joke put out there yet. Which, of course, could just mean this doesn’t tap my funny bone but I’m really trying hard to find the joke.

But, this is a dark comedy so maybe I’m just finding the situations too sad or f***ed up to laugh.

With the sudden death of Dr. James, Dr. Fujita finds herself coerced to venture into Dr. James’s home. Which apparently is a big deal as if Dr. Fujita never leaves the office. Now, as for how Dr. James went from a spokesperson for the NPB to having some masturbating machine on him and seeming like a has been? That isn’t said. However, it seems Yoda, the big boss, is okay with Dr. James’s return and so he takes control of the trial. Not before revealing to GRTA that Dr. Robert is dead, however. Thus leading the AI to cry and some metal she cries dripping on the lines which separate Annie from Owen. Making a connection which puts them in each other’s dreams. 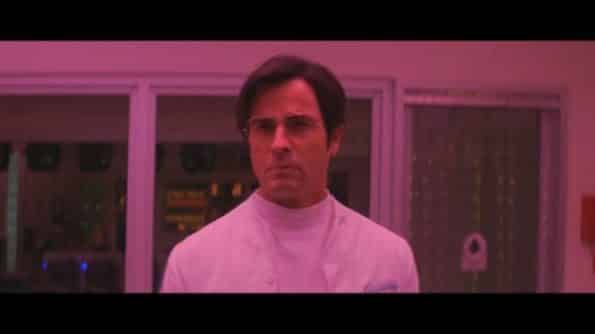 This is what I mean by it getting too weird for its own good. Between the VR sex and boss Yoda, we’re not at a WTF point where it is a turn-off but certainly leaves you scratching your head. But, I must admit this episode did well in making Dr. Fujita more curious. From Dr. James making it seem she never left the lab to it appearing they had a relationship, now there is a need to wonder what her backstory is? What would we see if she took Pill A?

Something I can’t say I wonder about Dr. Robert, nor Dr. James what so ever. Making me wonder if Somerville and Williams are better at writing women than men.

With a new team leader in place, Pill B is taken and day two of the experiment begins. This time, however, we don’t get a sequence which resembles anything you can imagine being either Annie or Owen’s life. They seem to be far poorer than Owen’s family would ever let him be and while they have a midwest vibe, it isn’t clear how this shared experience represents a roadblock or challenge GRTA has to understand just yet. Oh, and also their names are Linda and Bruce now. 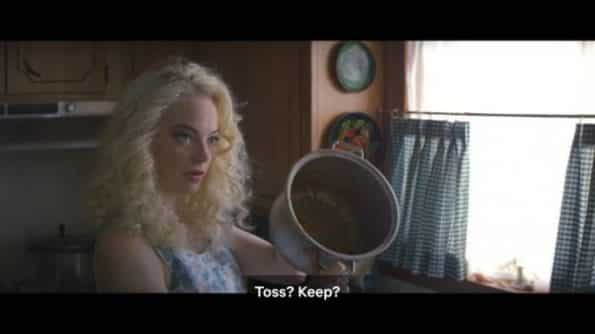 So, is it safe to assume Linda and Bruce are Annie’s parents or some representation of them? I feel like that is the only thing which could make sense here. Though, if we’re being completely honest, I do kind of wonder if this is the kind of show which may not have a goal of making sense. Lest we forget, these doctors seem like quacks and this company clearly doesn’t have the best HR. So we could just be cycling into two people’s madness which could present theories of a deeper meaning despite there never being a single intention of there being one.

When an addict dies, do you think it’s suicide…
— Dr. Robert