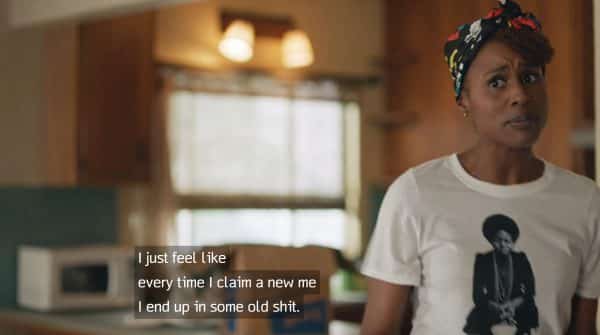 Remember how Molly said she was on some “Know better, do better” s***? Seems Issa is taking up that mantra as well.

I Don’t Want To Be Comfortable In A Bad Situation: Molly, Stacy, Taurean, Felicia, Dr. Pine

Being that Molly is driven by success and having something to show for it, not really making a name for herself at her new job is messing with her a bit. For, as she notes in therapy with Dr. Pine, Stacy and Felicia tag team on being the top Black women and Taurean the big shot of the room. What space can Molly fill?

Leading to Dr. Pine asking why can’t she just be helpful? Why must she make a statement, compete, be the best, and what have you. Which she tries to tap into but you know how therapy works with Molly. She hears Dr. Pine but she still needs to try all avenues before giving into the idea Dr. Pine was right. Hence why she goes from trying to help Stacy and Felicia with a case to following behind Taurean, I wanna say, and riding his coattails to the top.

Molly about to learn the side effects of Black women not looking out for each other in the workplace. Yeah, she in an all Black environment now, so she may think things are cool, but now it just means racism isn’t in play. So that means colorism and sexism fights to take up all that space left and while it Stacy isn’t being given a huge push, the setup is there. She doesn’t seem to make it about being light skinned and talented, but the way the men treat her is subtle for now.

However, again, the issue here is Molly always trying to be part of the boys club and thinking, without breaking that ceiling, she isn’t getting anywhere. Making me wonder, while she does have Issa, Kelli, and Tiffany, has she ever had serious female work friends or were they just seen as competition? Especially if their job titles were similar?

I remember she wasn’t the coolest with her office mate nor the Black girl who was a little bit hood. She tries to look out for her, yeah, but once she became a threat she slowly, but surely, backed down. Though maybe I’m remembering the situation wrong.

Remember Nathan? From Episode 1 of this season? Well, light-skinned Tyson is back and quite flirty. Which Issa gets into a bit. In fact, they have an entire day together. One which includes them touring different parts of LA, like where Issa grew up until her parents divorced at 16, and Nathan revealing he left Houston after the flood. I’m talking a date like we have never seen Issa on.

Problem is, it isn’t a date and Nathan is a smooth talking brother. As seen by Love Is, them negroes are dangerous.

How terrible is it that when I see a Black woman in love on TV, I feel like I’m waiting for the show to drop? Yeah, it begins all nice and cute but then we learn the dude got a ridiculous amount of baggage, is a liar, petty, a ho, or something else. But, with this season being about doing better, maybe things are changing? Issa isn’t messing with dudes from her past anymore and is making baby steps forward.

Mind you, her visiting her former house and area shows she hasn’t forgotten where she came from, but maybe Nathan represents not repeating the past but learning from it? She can get a house like she had with the right mindset. Maybe also the right person to help her reach that goal? Now, whether or not Nathan is that dude? Well, I’m not seeing anything about him becoming a series regular so who knows?

Let’s just hope though, like when Sterling K. Brown was on last season, we don’t see someone perfect for a lead who gets tossed to the waste side.

You know, meeting new people, good things happening in your life, they really put things in perspective. Like for Issa, meeting that interviewee in the last episode and Frieda talking about she can go back in the field? It leads to questions of whether she even wants to do that. I mean, with finding an old rap journal, talking about the talent shows she did, when skinny dipping with Nathan, also that after school program which deals with music? Why stick with We Got Ya’ll? She ain’t happy.

So, perhaps in a rash decision – she quits.

Issa: I need something new.

Um, she doesn’t live 100% rent free at her new place, is on call, and Lyft now seems a bit dangerous for her now. So, what is Issa doing here? Did Nathan inspire her to take a leap of faith? Girl, you don’t even know if that man got a job or his own place. He could be wandering about and found a decent homeless center to wash his clothes.

But hey, LA is the city of dreams and Issa finally may have one in mind. Let’s hope something becomes of it for she isn’t a teenager or in her early 20s anymore. The world isn’t that forgiving when you are a full on adult and floundering.