“Sometimes saying goodbye means you’re making room for something better.” This quote is a lesson damn near every last character needs to learn. As for why, look below.

The Death of Woot Woot: Lawrence

Lawrence pitches his app Woot Woot to his bosses Cameron (Ari Stidham) and Tim (Caleb Pierce) and is met with what he thinks is a good response. That is, until Aparna (Jasmine Kaur) makes it clear that unless they ask questions, they aren’t excited. Which, because it is coming from a woman, Lawrence blows off what she says. However, when he follows up with Cameron and Tim and comes to realize there is this avoidance of criticizing him and instead a focus on his shoes, he gets the point.

Leading him to ask Aparna if Tim and Cameron, because he is Black have something which keeps them from giving critique, saying his stuff stinks, and etc. Which she says they do. For she too, because she is a woman, don’t get the type of feedback she could really use. Instead, they all they can hope for is a lackluster response to be the hint. No shade, but if they ever do a live action Courage the Cowardly Dog, dude on the right should play Fred.

What does Lawrence have against taking a woman at her word when they try to tell him something? I get Woot Woot was his baby, but it wasn’t like this was something personal. She was trying to help the new guy understand how things work. But I guess what matters here is that, after a sort of passive-aggressive conversation, he got the point. Plus, he might have made a friend. Well, depending if you watched the preview for next week’s episode, Aparna may potentially be someone Lawrence can be more than friends with. She might actually become his next girlfriend.

Always The Other Woman: Dro, Molly 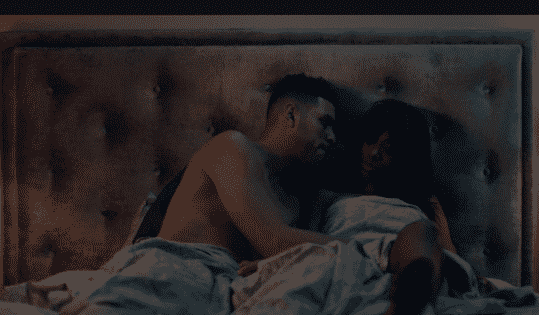 With quite a bit of hesitation, Molly and Dro are still messing around. Which, to Molly’s surprise, is not only something Candice is supposedly is cool with, but she also started this whole open marriage nonsense (excuse me, am I judging?).

But, here is the thing Molly didn’t factor as she enjoys having a long term friend with benefits: That feeling of being the other woman. For as much as she and Dro may connect and kick it, if Candice comes calling then he is out. It doesn’t matter if they already got a room, ordered dinner, and all that. His wife is always his number one priority and everyone else is a side chick. Something which becomes clear to Molly as she watches Dro run off to his wife. 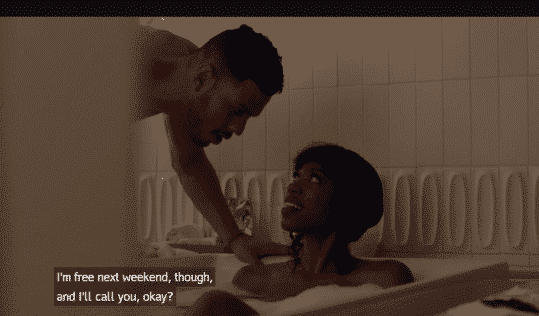 Isn’t it a damn shame all the relationships you kind of want to root for have such a slim chance of happening? Never mind they are so dysfunctional that even if both parties work out their issues, you can foresee something that happened in the past or the complication that got them together, being used as ammunition in a fight. Like with this Dro thing. Though Molly is trying to avoid catching feelings, let’s hypothetically say Dro left his wife for Molly. You know for a fact him leaving his wife for another woman would be a thorn in their relationship. Something that would haunt Molly and always make her feel on edge if Dro talked to a woman too long or didn’t pick up when she called.

Leading me to wonder, has Molly stopped looking for a therapist? For it seems the longer she is without one the more she is regressing. Because, as nice as Dro is, the Molly we see now and the one we saw in season 1 isn’t too different. Both are playing themselves, settling, and seem damn near desperate for some sex and affection. Which you can understand, to a point, but why can’t she use Lionel – who I refuse to give up on.

Issa’s ho-tation is out of whack. Eddie got someone and seems to be pursuing being exclusive with her. Daniel is working and isn’t at her beck and Call, and Nico wants to date for real. He isn’t looking for a f*** buddy. Thus leaving Issa frustrated in a multitude of ways.

Something which is not helped at all by Tiffany. Someone who, during this Sexplosion event she is part of, decides to dish out some advice. For while she mentioned, not too long ago, her marriage was having problems, she has a ring. Thus, in her mind, making her the expert. Now, as for what advice she has to give? Get better, and learn to enjoy, blow jobs. This is her advice and it leads to a discussion about the stigma behind blow jobs, why some of the women of the cast are for and against and eventually to Issa trying it out on Daniel.

Now, it should be noted, Issa has never been much for giving head. Between her teeth and feeling like women become disposable to men after giving head, it hasn’t been her thing. Or rather, she’d have to REALLY be into you to do such. But, she is feeling Daniel so she uses what she learns at Sexplosion on him. Leading to him exploding on her face and with her getting ejaculation fluids in her eye, she gets all the way pissed and storms out of Daniel’s apartment. 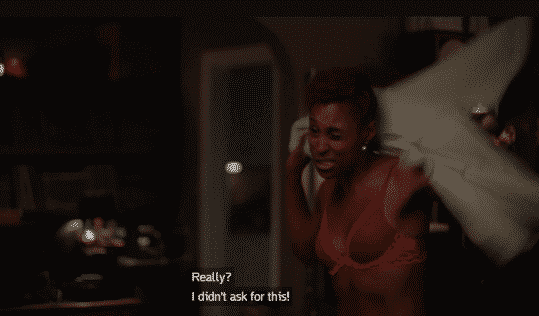 Issa after being blinded in one eye.

The fact Issa wants her roster to be at her beck and call and have no one else, while she messes around, I think is the first sign she is slowly desiring a relationship. For the jealousy she was experiencing just over Eddie, ole big head Eddie, was comical. Yet, based off her blowing off Nico, in the rudest way possible, one could argue her ho phase isn’t over just yet. It is just she is starting to miss someone exclusively being hers.