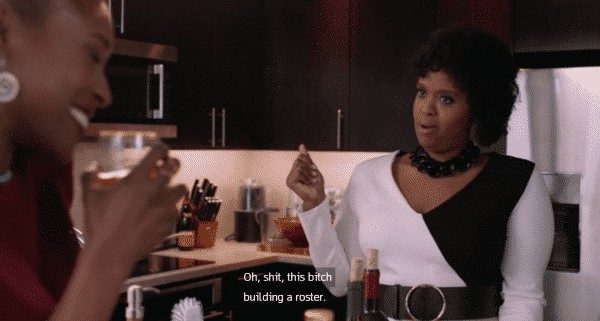 After getting pulled over and forgetting to have any type of money, Lawrence lucks out when two girls pay his $40+ bill. In return, he ends up having sex with them. Something I should note wasn’t discussed in the store as a repayment, but more so something that just happened when he went home with them. Which, with the way both girls talk, Lawrence is not the first guy they did this with. It seems they often take Black dudes home and share him.

Leading him to park outside of Issa’s complex for a minute as he talks to Chad about the experience.

I’m honestly struggling to derive a deeper meaning out of this. If only because, while threesomes happen, and I’m sure there might be some people, like those girls, who hunt for Black penis, the whole scenario seemed so out of place on this show.

That is, as opposed to showing Lawrence trying to work Issa out of his system and maybe show that as much as he is an F*** boy, he isn’t capable of being a ho. He is someone that is better when monogamous but is just terrible at being in a relationship with someone who has expectations. 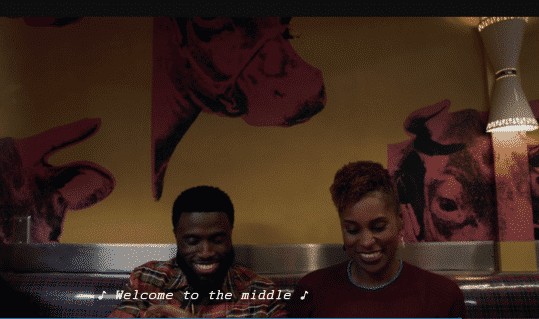 Issa is still doing app dating and while one guy she was supposed to hang out with at Kiss and Grind curves her, there is Daniel. Someone who she is kind of awkward around when they spot each other. However, after the party when she, Molly, and Kelli are getting something to eat, he becomes her saving grace. If only because Kelli decides to get finger popped under the table while Issa is right next to her. Making Daniel making room for Issa next to him such a blessing.

We met Dro (Sarunas J. Jackson) an episode or two ago and it was established he was married and seemed to be happy. In this episode, however, he notes has an open marriage. Something he seemingly wants to take advantage of to see what Molly has learned since middle school [note]They kissed in middle school.[/note]. Now, being that Molly isn’t trying to devolve, she isn’t sure about hooking up with Dro, even with them having chemistry. Issa seems okay with it, but she is a cheater so of course she would.

So Lionel is just gone? We’re not even going to talk about him? He asked out Molly but because he is too much like her that means he gets ghosted? Really now?

I mean, I get her being in a healthy relationship takes away from the comedy and drama, much less Sterling K. Brown may not have the time to do a real arc on the show, but I don’t like being teased. I don’t know about you, but even if we are nowhere near where Issa Rae plans to end the series, I don’t see why some characters, who are truly the main cast, can’t be happy[note]I don’t count Tiffany since she disappears for so long I forget she is on this show.[/note]. If not, at the very least, on the road to it.

For while I get, the main goal here is to show women, Black women, who don’t have it all together, who aren’t rich and don’t have Shonda Rhimes type drama in their lives, that doesn’t mean we can’t have progress right? Considering the therapy Molly has been in, even if Lionel was just here for a season, it would be nice to show how therapy has helped her. Alongside that, through seeing a male version of herself, Molly could further her understanding of why past relationships didn’t work.

Now, as for Issa? I’m honestly for her and Daniel checking things out. Granted, he is her partner in the cheating situation, but part of me thinks he was the right guy who came back into Issa’s life at the wrong time. So now with Lawrence being a ho and continuing his F*** boy ways, what better reason for Issa to maybe revisit Daniel and see what is happening there?