Cut off from those who made her enjoy being sober, Jackie struggles as Jorge’s disappearance causes unexpected consequences.

Me Against The World – Charmaine, Frankie, Alan, Aileen

The strength of an operation can be judged by what happens if someone leaves. Jorge, while loud and obnoxious, at the same time handled his business when it came to the family business. But, with Frankie keeping things lean, it makes it so, when Jorge doesn’t show up to pick up Charmaine, she has to take that product home and make phone calls.

As you can imagine, despite being the adult in the situation, Frankie doesn’t like talking to Charmaine and looking stupid. Yeah, she is a teenager, but she has the hot new thing, and even without the infrastructure she needs, it isn’t like she isn’t learning the ropes. So, maintaining trust and dependability is essential. This makes Jorge missing an issue that can’t be ignored – so Frankie starts questioning everyone who would have an interaction with Jorge.

But, with Charmaine and the drugs on the back burner, this gives Aileen enough time to get curious. Specifically, she looks for a gift Charmaine said she had, which leads to her accidentally OD’ing. Now, was it because a box fell out, and she got hit in the face with the drug? Seemingly no. More so, it was her sticking her fingers in to see what it was – thus leading to her OD’ing with no chance of resuscitation. Which for Alan is seen as an opportunity to try to appeal to Charmaine, but she doesn’t take to it. In fact, she finds it immensely insulting.

With Leslie making it clear Jackie took the fling too far, and it is no longer fun for her, Jackie is getting desperate. The problem is, Ed got cut too deep to accept an apology, and Linda isn’t too happy that Jackie can have massive screw-ups and be easily forgiven but Ed? He has one notable screw up and Jackie talks to him like she did? HA! That leads to her losing her invite to thanksgiving.

So, down two, seeing Devonne randomly was nice, and Jackie hoped maybe she could visit that old thing, but Devonne is in a relationship. Hence Jackie eating out Devonne’s friend, but with the friend saying Devonne didn’t care, that ruins the high Jackie could get, and she dismisses the friend just like Jackie got dismissed by Leslie. 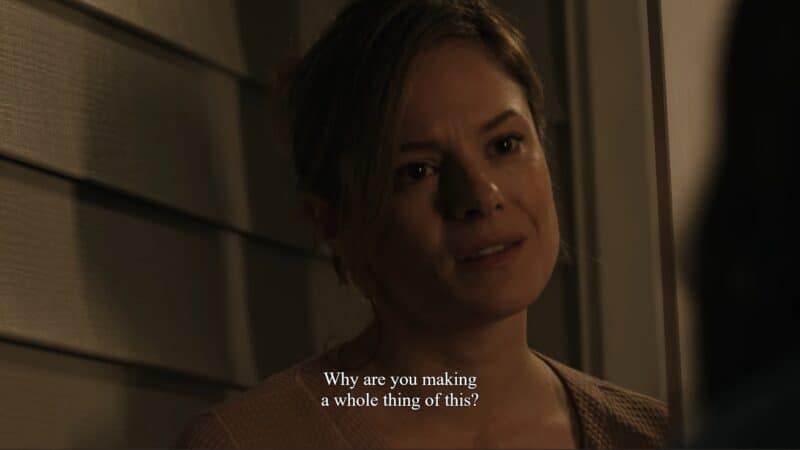 Which leave Ray, who, because he has his own stuff going on, all he is able to offer is an “I told you so,” which, with Jackie licking her wounds, is the last thing she wants to hear. Especially when Ray talks about who he is messing around with again.

When Jackie comes to Ray’s apartment, he has just finished having sex with Renee, who he is in a weird space with. On the one hand, he still has feelings for her. He doesn’t know he is the father of her kid yet, but even without that information, he is drawn to her. However, she is also the woman who ruined his life, and she comes at his lowest point. So, due to lack of trust, he puts a tracker on her car and even tails her a bit – which leads to him catching her in a lie.

But, when it comes to Renee, it seems she realizes that with Frankie, she isn’t going to have normalcy. He is a drug dealer, a murderer, which she says to Ray, and there is no living life and simplicity in that. Even without murdering Jorge, she would always have to worry about cops, Frankie’s rivals, or even the people who work for him. I mean, it wasn’t all sunshine and rainbows with Jorge when he was alive! But with Ray, there is hope that she, Frankie Jr., and their kid could have something that doesn’t have risk involved. Now, whether Ray, in the long run, believes her is hard to say. 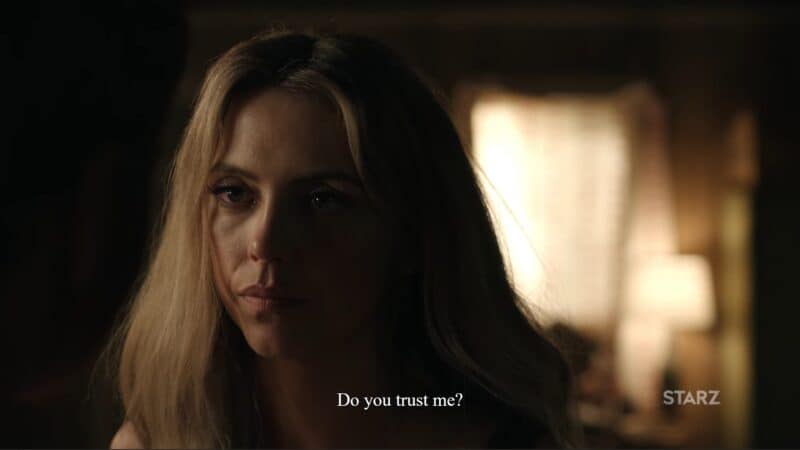 However, while Ray might finally be getting a break, at this point, Jackie seemingly hasn’t hit rock bottom. Well, at least she may have hit rock bottom for where she was, but she decides to take out of a shovel and dig deeper. Thus leading her to her father’s doorstep and being ready to drink her night away.

Renee Stuck Between A Rock And A Hard Place

I appreciate Renee. Yes, she was prayed upon when she was young, yet I wouldn’t say she is stunted. In a way, if you put her next to Daisy, you can see a glow up beyond marrying her predator. She is business savvy, knows how to manipulate men for her gain, and even with being more a liability than an asset, she isn’t dead, in jail, or discarded. They really made this character far more than what she could have been in a different set of hands.

Charmaine On Her Own/ Alan’s Best Scene 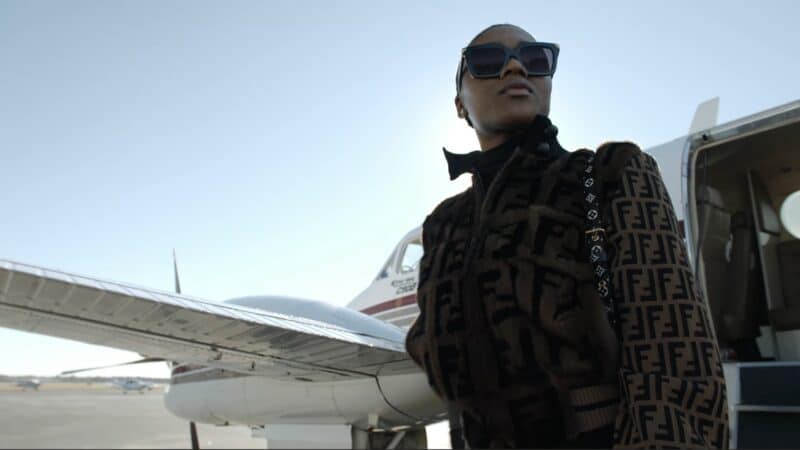 Charmaine is the one, two, and three when it comes to the criminal element on this show. She comes in fly, gives the kind of attitude that makes you notice her, and in terms of Alan? As shown throughout the series, Alan usually has to be carried through a scene, and she didn’t just do that but prop him up and almost made him interesting. For in him trying to speak Black person to Black person, you may roll your eyes, but Charmaine gave it to him straight. That whole talk usually comes from people who think they have some influence but don’t. Usually, you just humor them, but at this point, Charmaine is done with that. She wants her respect, her money, and to not have to have conversations with people like Alan.

Which makes it a shame she is so close to the product, with no separation from it. But considering we still got Osito, despite him in jail, even if Charmaine does go down, there is hope she won’t be phased out.

We’ve seen Jackie at her worst already – she literally killed someone due to her drug/alcohol use and her sex addiction. So as much as we understand she transferred her love for substances to being a love addict, with Leslie as her focus, I don’t know if her bottoming out is the best idea.

Granted, with her father being involved, maybe this will allow us to get to know Jackie, her dad, and her mom, to understand her foundation. But I just hope we don’t fully retread where we’ve seen Jackie come from because the last thing this show needs is to repeat itself so early on in its run. Hightown: Season 2/ Episode 6 “Behind Every Skirt Is A Slip” – Recap/ Review (with Spoilers)
Trajectory: Plateau
While Jackie keeps flirting with the idea of being this show's main liability, everyone else is progressing. Some in terms of being the badass we love and adore, like Charmaine. Others, like Renee, are continuing to prove there is more to their characters than their origins. Add in Osito and Ray still holding this show down, and it makes it easy to forgive whatever we may go through with Jackie.
Highlights
Charmaine On Her Own/ Alan's Best Scene
Renee Stuck Between A Rock And A Hard Place
Disputable
Jackie Relapsing
79
Subscribe to our mailing list