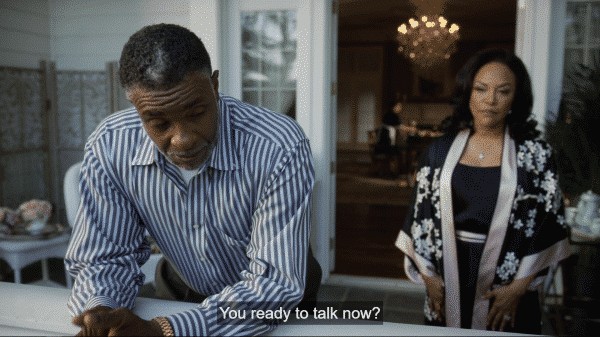 Faith, money, morals, and understanding. Four words which are the themes as temptation lurks about and few can say they are truly holier than thou on Greenleaf.

Table of Contents show
1 From Dreams To Reality: Charity, Lady Mae, Carlton, Bishop Greenleaf
2 Money Over Faith?: Tasha, Basie, Jacob, Sister Weaver, Skip
3 If Only Relationships Were Easy: Zora, Kerissa, Darius, Grace, Lady Mae, Bishop Greenleaf, Rochelle
4 Highlights
4.1 Carlton Coming Back and Continuation of Homosexuality in the Church
4.2 Basie & What Women Are Capable Of
4.3 The Closeness of Grace and Mae and The Fall Of The Greenleaf Heads of Family
4.4 Kerissa and Zora
5 Criticism
5.1 So, Did Kevin Just Get Written Off?
6 Collected Quote(s)

Despite learning Maricel’s husband is undocumented and sick, thus leading to Lady Mae pulling her from Charity’s equation, she isn’t giving up. Charity wants to sing on a stage not belonging to Cavalry and live out her dream. Whether her mother likes it or not. Which, with Lady Mae and the Bishop at ends, it empowers him to make the decision, without her, to approach Carlton to fill in while Charity is gone. Another thing to argue about.

As Jacob pursues helping the homeless more, Sister Weaver is there to check him. After all, in her mind, money runs the church. However, being that Jacob is under the belief his compass points him toward all that is holy, he says God is what runs the church. Though, even with that said, and him trying to continue this inclusivity brand Basie started, there are worries about the numbers.

However, with Jacob’s old friend Skip Leonard running for mayor, speaking about grants, and just wanting Jacob to tone done the pro-gay statements, so comes a crossroad. One in which Jacob can trade in what’s right for money, or continue to support any and all members of his congregation. Final decision: Accept $75,000 for his programs. Something which may not get a smile or joy out of Sister Weaver, but she stands and acknowledges the effort.

But, as for whether this effort may be enough to convince Tasha to not sabotage it all? Well, that is hard to say. Especially since Basie calls and reminds her of who the Greenleafs are and what they did. Be it taking his father away or their church. Though, in my mind, you gotta wonder if Tasha may really help a man who abandoned her like Basie did. Nevermind won’t say where he is for her peace of mind. For with a man before her that talks the talk, seems to walk that walk, could she maybe become convinced to join team Greenleaf?

Starting from the young to old, Zora is starting to visibly change. Not just in terms of bruises but also in school. While still a B average student, she doesn’t talk as much. Something one of her teachers notices and it leads to her parents thinking maybe she is on drugs. However, it seems to be the worse option, at least in Kerissa’s mind. For she finds a condom and finds herself slapping the mess out of her daughter. Not because of her having sex, but because she has a smart comment when she talks about saving sex until her marriage to Jacob made him respect her.

Now, it isn’t clear what may happen now that Kerissa knows, much less banned Isaiah from the house, but you know the relationship between him and Zora isn’t over yet. Though, when it comes to Lady Mae and Bishop Greenleaf, we may be on that path. For between Bishop Greenleaf getting closer with Rochelle, who he joins for her 5 year cancer screening [note]Of which, outside of maybe some kidney issues, she is fine[/note], and how he shows out in front of Darius when he finally gets invited over for a family dinner, it may be the beginning of the end for them.

Oh, and did I mention that not only does Bishop Greenleaf know about Lady Mae’s affair but he had one with Mavis? Yeah, that bomb got dropped and explains why their relationship has been so weird. But, in the long run, it doesn’t seem clear if divorce is an option or if maybe prayer can heal old wounds. For the contentious issue at the moment is James told Mae soon after he did whatever with Mavis. Mae, on the other hand, sat on her secret for years and let James treat Lionel like a brother and guest despite the situation.

Carlton Coming Back and Continuation of Homosexuality in the Church

I can fully imagine Carlton being petty as he comes back to Cavalry and looks at Lady Mae and I am so here for it. But, in general, I’m loving the fact Greenleaf is not dropping this topic. With Carlton back, Jacob having to choose between supporting the community and money, and I assume eventually Grace jumping in, so many necessary moments are being had. Like Carlton asking if Bishop wanted his entire person, wanted him to be an exception and etc. Much less, Bishop maybe, finally, preaching. For, as said likely one or two reviews back, I kind of miss the sermons on this show. Especially when they are really preaching about something and not just pushing the storyline along. It’s probably the main thing from Season 1 I miss.

Basie & What Women Are Capable Of 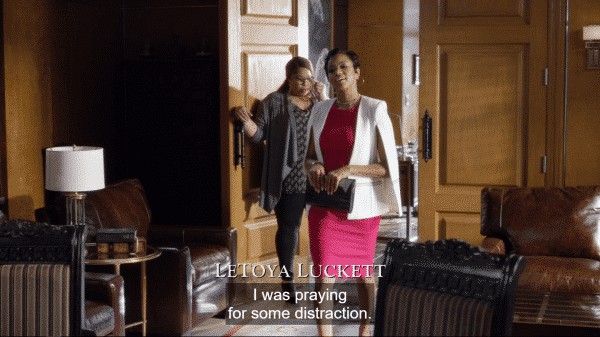 You know I love Basie. I gush about him in every episode of this show. This will be no different. For, once more, he is presented such intrigue. The idea he is going to push Tasha to continue where he left off in taking down the Greenleafs. Something I honestly can’t picture her doing. Only because, similar to Rochelle in a way, while you know those two are capable of messing up people’s lives, I don’t see them actively pursue it.

In the case of Tasha, I think as she watches Jacob be a genuine person, she may back down from Basie’s plans. Maybe think of Jacob as an exception and try to shield him from Basie’s onslaught. However, this perception comes from Tasha being a foreign entity to us thus far. Someone who we only really know for being Basie’s wife, a little ditzy, and going toe to toe with Lady Mae one time. So as she steps forward to get a bit more spotlight, it’ll be interesting to see what she does with it.

Which can also be said for Rochelle too. Though I usually avoid previews, I found myself watching this video of LeToya Luckett talking about her character Rochelle. In it, she implies as sweet as the woman is, we may find ourselves discovering there is more to her than this southern charm and hint of innocence. Something I’m interested to see play out since Bishop is really veering into dangerous territory the way he speaks, touches, and allows his face to get too close to Rochelle. Damn near daring her to do something. With, of course, the option for him to say she misconstrued something. 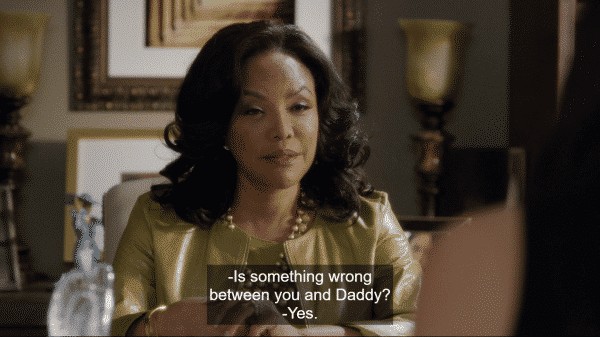 Until the end of the season, I will be amazed at how Mac’s death really opened the doors for Mae and Grace to reconcile. Who knew a man like him dying could be cleansing? And while neither one is necessarily pursuing an extra buddy-buddy relationship, it is them testing the waters and being open which interest me. Like Mae noting how she thinks things between her and the Bishop are rocky. As noted in the past, it does seem a bit weird Mae tells this to Grace but who else does she got?

As we learn, Mavis slept with James and those two aren’t close. Probably never was. Alongside that, Lady Mae, like everyone else, doesn’t have friends outside her significant other. Plus, now that Grace has run out of crusades and is worrying about her own life, the two have nothing to fight over now.

If anything, they might be allies. For as Grace watches Rochelle, while helping with Maricel’s issue with her undocumented husband, she sees the chemistry between James and her. She listens to how others can see something special there. And with James being as messy at dinner this episode as Mae was in the last? Psh! We have just begun to see these two be passive aggressive in public and maybe nasty to one another in private.

While I’m still waiting for Kerissa to be more than this stern woman by Jacob’s side, I think Zora might be the one to help open her up a bit. At least, when she finds out about the abuse. For not that I wish Kerissa to have some tale about how she was in Zora’s position, but I just feel like we need something more out of Kerissa besides the occasional insecurity and her seeming like a less couth Lady Mae when agitated.

So, Did Kevin Just Get Written Off?

Charity basically says Kevin isn’t likely to come back and with us not seeing him and forever, and him being Aaron’s live in, possible, boyfriend, is that the end? Not that I’m pressed over Kevin’s existence but he was a main character for a while. There could have been a better send off than that, right?