As Joey decides to push back against Ms. Wilder’s tyranny, Sid and Leila are dealing with exploring their sexuality.

There Is A Boy Who Likes Me – George, Leila, Tim, Joey

For both Leila and Tim, there is something about the person they like. When it comes to Leila, George showing interest is a compliment, puts a pep in her step, and while anxiety comes with that, the ability to have sex with someone is exciting. Granted, George is trash, but for Leila, it was still a moment to remember. Sadly, the feeling isn’t mutual, but maybe something could come of this down the line? You know, similar to Tim and Joey, who, despite how Tim’s sister feels, clearly like each other, and despite Joey’s hesitation, she allows herself to fall for Tim. Someone supportive, woke as she likes it, and has something going for him. I mean, he even meets Alexandria Ocasio-Cortez during an interview he has.

After the terrorist attack, and with his college status, Sid is between multiple rocks with very little wiggle room. He has his dad reminding him of his status, while wanting him to make sure he doesn’t come off like a Muslim. As this happens, he is dealing with the criticism of his college essay and tasked with seeking out a peer to help him. Said peer, Victor, reminds Sid of his private fantasies as he looks at the boy’s lips, and it’s only when his girlfriend shows up that daydream ends.

But Sid isn’t the only one struggling. Jay and Owen have to hustle all weekend to get Dominique her money back, and even with doing so, they are suspended with expulsion on the table. Mind you, it isn’t like Dom wants the boys to be expelled, but she did really need that money. After all, her mother seems to not be the best with money, and being tasked as the responsible one means she can’t have $200 just no longer be available.

Granted, it was for classes for the kids but imagine if it was rent money, for the electric bill, or something else? It isn’t clear who knows Dom’s story but clearly, it isn’t as simple as other people’s.

If threatened by Joey, it’s understandable. With an Instagram post, she rallies the dance team and many other school members to fight back against women like Ms. Wilder and even the administration, who police girls’ bodies. However, Ms. Wilder is the main target, and while Joey’s means of provoking her are extravagant, which includes wetting her shirt while being braless, she gets what she needed.

Mind you, being called everything but a child of God, without a single curse word coming from Ms. Wilder’s lips, you can tell that hit harder than Joey expected. However, who wins wars without some scars and ultimately, Joey does find a way to win by getting Ms. Wilder to apologize, and with the solidarity of the boys, the administrations of Grand Army find themselves on the defense.

And to commemorate this, Joey gets her nipple pierced because she is the bad ass she needs to be.

You know what you rarely, if ever, see? Coming of age stories featuring Asian women. So even if Leila isn’t what some may consider traditional, or is too American, guess what? Her story represents so many Asian girls in America. Be it the fact she feels disconnected from the culture people assume she identifies with, that of her parents, or her struggles with people calling her Japanese when she is Chinese.

Add in the racism behind how she is spoken to, whether considered Japanese or Chinese, even in the case of George calling her “China Doll,” and you can see Leila is going to have quite a journey this season.

While you can see potential relationships blooming left and right, Tim and Joey are the only couple right now worth shipping, and they give you such hope for the others. Mind you, they are lowkey and sort of secretive due to Tim’s sister, but what you have to love is how supportive Tim is, and that neither he nor Joey are dependent on one another.

I mean, in comparison to George and Leila, while both are utterly enchanted by one another, they still have full lives outside of each other. But, when the other is in need, they show up, they text, they support, and it presents a shining beacon of light amongst what you know is going to be a dramatic season for relationships.

It’s Joey’s world, and we’re just living in it. I mean, A’zion, one of Pamela Adlon’s daughters, shows that same command over the screen as her mother with the same penchant for being as much a star as someone who lovingly can share a scene. You can see this in each “Free The Nipple” scene as she rallies her troops, faces off against Ms. Wilder or the administration, alongside has a small breakdown after being sent to the main office. 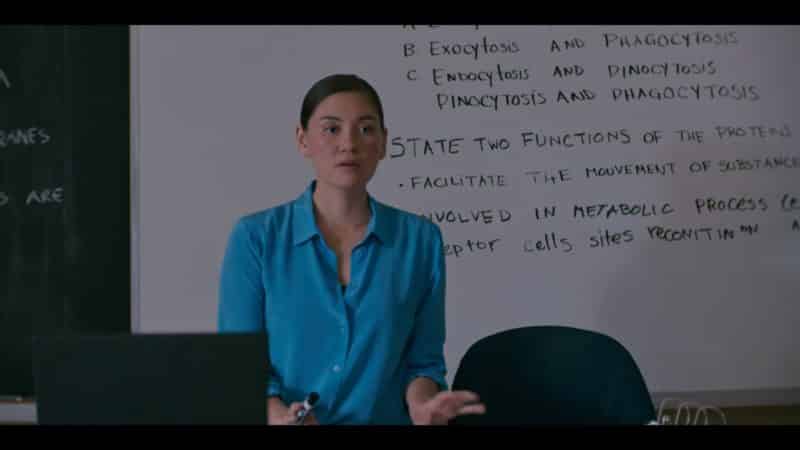 Which is something we want to focus on. With being someone sent to the main office, a lot, back in middle and high school, there is a certain appreciation for her tearing up and seeing that. Granted, my reasons for getting sent weren’t on Joey’s level, but there is a connection in being scared yet proud you stood up for yourself and pushed against the feeling that someone wanted you to trade in what made you feel comfortable for the sake of themselves as if it was affecting everyone.

If not, as we see in so many high school shows, teachers and administrators willing to watch you die slowly, with few, if any, willing to adjust their attitudes or beliefs just because they are in a power position. Mind you, one that can be stressful, as they are expected to deliver results, but there is something about that first experience of someone in a power position taking out the stress their boss puts on them on you that you never forget. Alongside making it clear they can’t s*** on you just because it is assumed you’ll be too scared to push back.

When we put “LGBT” as one of the show’s tags in the premiere, we didn’t know if there would be a queer character, it was just assumed. After all, there are way too many kids on this show, and it takes place in New York – there had to be one. So Sid was a surprise, yet also wasn’t at the same time.

He was because we saw Jay encounter the dealer who could have been a homosexual, so we thought maybe he had a secret relationship. You know, to play on the whole down low scene. Yet, here is Sid, a member of the swim team, meaning he sees a lot of his friends in speedos. This isn’t me trying to push the narrative that gay men are hypersexual and always thinking about ass and penises. One of the reasons we appreciate Dominique’s story is that, with her not being the central focus, it means the audience is pushed to realize her story doesn’t represent everyone like her. As shown in calculus class, she is as smart as many, maybe beyond their academic intelligence, but has some personal struggles. Of which, everyone clearly has, and Dom’s is having two younger siblings and a mother who may not budget as she should. And while we still need more time with her before we can write glowing things, there is still so much to explore and see with Dominique.

While we love their desire to be jazz musicians, something about Jay and Owen just feels dull. I can’t say why, but maybe it is because they haven’t really shown much personality? That there isn’t a hook to them beyond what instruments they play? Hence why them possibly getting expelled, despite the tears, doesn’t elicit an emotional reaction or curiosity about what would come next.

So here is hoping that between that Sonia assumption, or someone making the boys more interesting, something is done to liven them up.