Daenerys gets her war against Cersei, and in the process, she comes off far more dangerous than the Night King and his army ever were.

With Varys ready to spread far and wide Jon’s claim for the throne, and it being intercepted by Tyrion, Daenerys has him killed. In fact, she makes sure Tyrion and Jon are there to see so they don’t get any ideas. Thus leading to Tyrion trying to salvage things for clearly Daenerys is losing it and with Jamie captured, he’d rather one of the few people who truly loved him not to die. So, the idea is, with Ser Davos’ help, he’ll smuggle Jamie in, get Cersei to finally surrender, and King’s Landing, never mind the Red Keep, won’t be burned down. 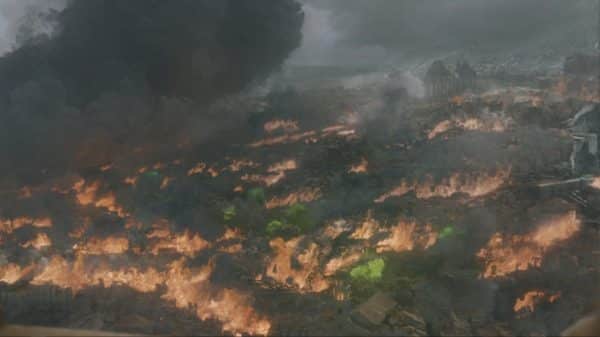 However, as things get locked down, Jamie doesn’t reach Cersei, and thus Daenerys begins her assault. An assault which, just with one dragon, wipes out the iron fleet and all the defense mechanisms Qyburn came up with. Leading you to wonder, how many died because of Daenerys being so sloppy at the Battle of Winterfell? Much less, if Jon still had his dragon, what would he have done as Daenerys decided to raze King’s Landing?

Yeah, the girl finishes what her father threatened to do and razes the whole city, burns the innocent, and that includes sending her soldiers to do so. Mind you, this is after the Lannister army surrenders and rings the bell noting they give up and Cersei’s reign is officially over. Yet, I guess an old fashion execution wasn’t good enough. Like her family was wiped out, so must those who watched or had a hand in it. Leading to her doing multiple swoops of the city while Jamie and Euron fight, The Hound and his older brother, and chaos ensues.

Leaving us with Euron dying to Jamie’s hand, and Cersei dying due to a cave in. That’s right, like the Night King, one of the top villains produced by a fantasy television series has an anti-climatic death. One in which she dies in her brother/ lovers arms wishing she would have surrendered when she had the chance.

The Reign Of The Mad Queen: Daenerys, Arya, Jon, Greyworm 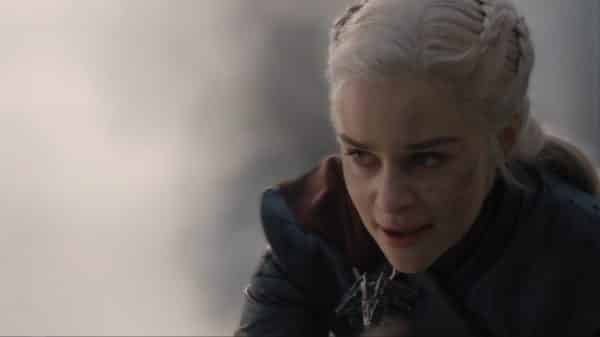 Originally, Arya was going to kill Cersei but was talked out of it. Leaving her to try to figure out how to escape the city and, at one time, she was going to help others try to escape too. However, they clung onto those bound to die, so she decided to worry about herself. Meanwhile, as Daenerys is flying about, the Dothraki are killing innocents, Greyworm and the Unsullied are killing members of the Lannister army, even after they surrendered, and Jon is just stunned by what he sees.

Thus leading him to have his soldiers from the north retreat since he wants no part of this but it takes a while for them to do so. Likely due to getting revenge on a sigil that caused the north years of loss and turmoil. Never mind turning their backs on them when they needed them against the white walkers.

A Goodbye To The Only Ones Who Really Loved Me 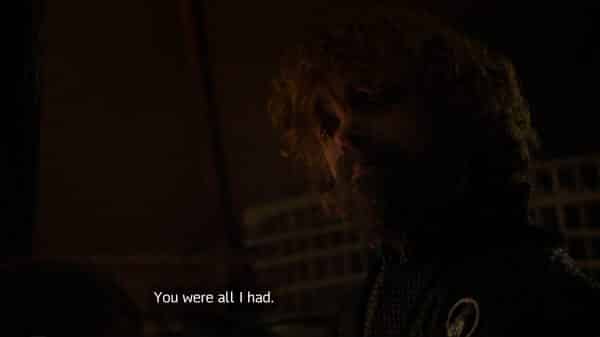 Alongside the goodbye Arya and The Hound shared, there was the one Tyrion and Jamie did. One which reminded us how, despite how being foolish and sentimental has recently steered Tyrion wrong, it is because, despite it all, he had hope. Something that he only had because Jamie showed him love when he was on the brink of death, and many wanted him dead. Which, when you think about it, likely explains Tyrion’s sympathy towards Cersei. Though she always hated his guts, that was still his sister, and for him, the victory wouldn’t just be the lives that were saved but maybe getting his sister to thank him, perhaps take back the things she said and love him as Jamie does.

For if there is one thing which seems clear at this point, it’s that Tyrion is really taking note of his mortality and what he may leave the world with and how it sees him. His legacy, basically. Which, yes, may show him as a clever hand to a crazed king, to a mad queen, and someone who played a role in the winning of Blackwater Bay. Yet, for all that, what peace has he brought? What long lasting good has he done? Being on Daenerys’ side was supposed to compensate for the whoring and nothingness which was his life, enabling horrors to save his own neck. But, look at him now. He killed his best friend, he is perhaps on the last living Lannisters, or soon might be, and he has guided a woman who could have been a good queen to the point she places little value on human life and is paranoid.

As noted below, in a much more negative way, he has led history to repeat itself and he is now in his father’s shoes.

The Last Meeting Of The Hound & Arya 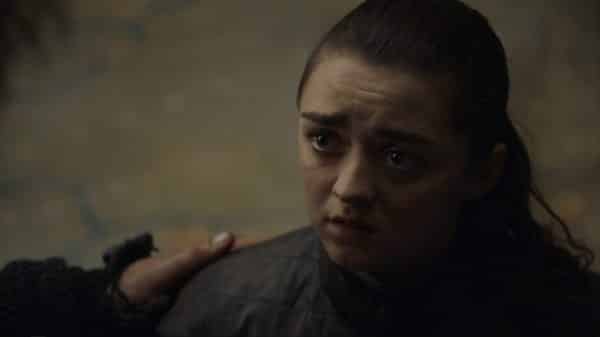 It’s hard to say what The Hound was to Arya. A father figure which came soon after her biological father was killed? Perhaps the first friend she really had that saw her for who she is and recognized, while a royal of some kind, she wasn’t a princess? Either way, so far Arya has been the only one to really benefit in the last season, and it is with The Hound sending her away from death, us seeing her looking like the child who lost it all once more, we’re reminded of how few people Arya truly allows herself to be vulnerable around.

Heck, even if you bring Gendry into it, I’d argue there was no sense of love when it came to them having sex or the kiss in the episode which followed. There was but an experience Arya wanted. One which, under the pretense she may die, and perhaps an attraction when things were simpler, she wanted to explore. Yet, with The Hound, and situation at the Red Keep, it appeared Arya realized she didn’t have to keep that face she shows everyone who can’t be trusted. Maybe the face that she wants relied on in some way, if not the persona she wants to eventually be and not simply be a mask she wears. With The Hound, who arguably knows her best at this point, she let her guard down and rather than try to be bold, finish her list, and let that be it, she listened.

Creating one of the few moments in the entire episode which made it seem like closure was the aim and not simple minded fanaticism.

How They Killed Cersei 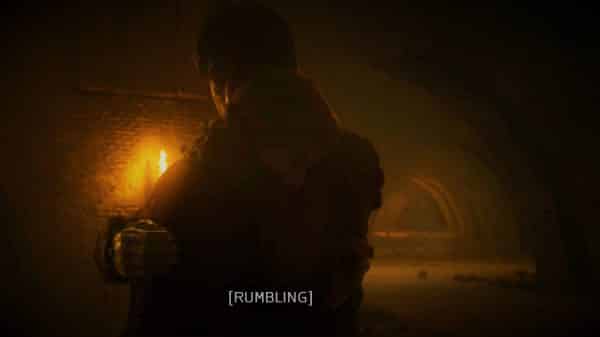 *Takes a breath* With Arya defeating the Night King, while I admit how she did it was cool, there is also how pitiful it is a simple move killed the being who striked fear into the world for hundreds of years. All thanks to a dagger and a girl who knew how to use a sleight of hand. At the time, I accepted it, got hyped even, because it was Arya and I love Arya.

However, with Cersei, she needed to die a proper death. Not just because of her killing Missandei, but because of everything she has been part of since season 1. To say she didn’t deserve a violent, satisfying, the kind of death I can’t write on here if I want this post to have ads, is an understatement. So having her die, in Jamie’s arms, due to a cave in? ARE YOU F***ING SERIOUS?!

Why did Jamie get such a death deserving of him? How come the Red Wedding, as tragic as it was, was so brilliant and shocking? Hell, the end of Lord Drey was epic. So why is it, with this being the final season, the biggest and baddest are getting deaths which are so anti-climatic?

Then, on top of that, Daenerys has clearly gone mad, and with her wanting to rule with fear, she is not only picking up where her father left off but setting up a similar death for herself. Since, at this point, even though he is loyal, I can see Greyworm killing her for going too far and becoming like the masters she freed him from. Much less, Jon seems like a good option, Tyrion to compensate for what he did, and pretty much the entire scenario Aerys was in, we’re pretty much right back at it.

Making it seem the one who once said she was going to break the wheel, not be a spoke, has just turned the wheel a full 360 degrees and brought us right back to when the Targaryen dynasty was at its end.

So, Daenerys Couldn’t Fight That Smart At The Battle Of Winterfell?

You saw how efficient Daenerys was? All the while with one dragon. Um, she couldn’t have been like that with Winterfell? I’m just saying, while the Night King wasn’t going to surrender, what we saw here was her efficiently killing a massive number of people in a short time and, again, with one dragon. Honestly, I feel like the finale is going to be trash. Based off how the show has been this season, likely someone, probably Jon or Tyrion, are going to kill Daenerys and Jon will, with hesitation, become king. Because, what is the other option right now? Daenerys kills Jon, Tyrion, and reigns as an extension of her father’s rule? Just waiting for her enemies to surround King’s Landing to die fiery deaths?

I mean, we’re coming to, but a few options and none of them sound all that appealing. Even Arya killing Daenerys, just due to her cruelty, doesn’t sound that exciting. So, is there any way to really clean this all up and bring it to a satisfying finish or will we just be left pissed and HBO will hope it won’t affect the prequels? 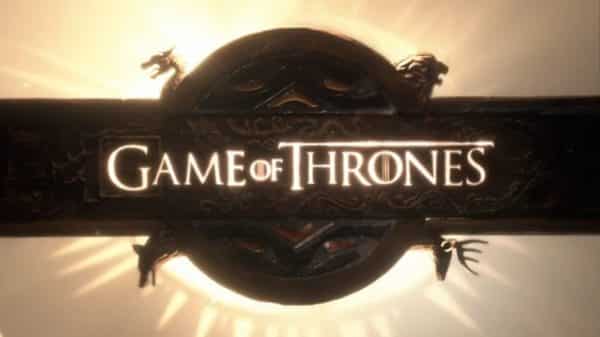 So, Daenerys Couldn’t Fight That Smart At The Battle Of Winterfell? - 64%

A Goodbye To The Only Ones Who Really Loved Me - 86%

“The Bells” is a disappointment. Yes, there is blood, death, people burned to death and war, but after delivering fan service for years, the writers pivot and create an unsatisfactory death to another one of its biggest villains and with this being the penultimate episode of the series, makes you worry the finale will stain all that has built up to it.