Just as Wallace’s guilt in his part of Eric’s death hits, a whole new problem threatens his safety.

Talking with Jonathan about handing Eric the gun he killed himself with pushes Wallace to start erasing a few videotapes. Now, it isn’t clear if he erases the ones which hold CJ and Ronnie throwing the guns in the dumpster, but he does erase evidence of him having the gun and Lexi walking towards Eric’s car. Leading to him, later on, trying to figure out what happened in the car. Something we aren’t shown if she decides to rehash to him, like she did CJ, or if she tells him to mind his business. Especially considering he tries to redirect her from having an interest in CJ. 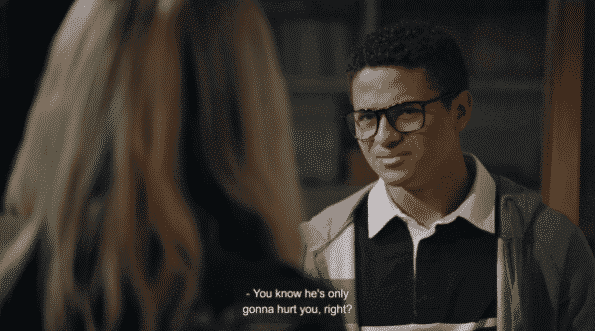 Wallace: You know he’s only gonna hurt you, right?

Wallace is a low-key weasel – let’s be real. Generally speaking, he is a good kid, but him erasing that footage, Lexi’s especially, was a calculated move. One not just to protect himself, but also something to hold over her in a way. Not in a blackmail sense, but more so as a showing of what he would do for her. Which, when you think about it, is kind of creepy.

I mean, look at it from Lexi’s point of view – this guy you barely speak to, whose best friend is your best friend, did something illegal on your behalf. An act which, because he has a crush or weird infatuation with you, he can make seem you told him to do it or could use against you. You get how what Wallace did was creepy now?

After all, what trouble could Lexi get into? Granted, while wrestling with Eric for the gun her fingerprints may have gotten on it but not the trigger. It isn’t like she accidentally shot Eric and she is trying to make it look like a suicide. So CJ and Wallace trying to make it seem like she has to hide her association seems kind of weird to me. Talking to her and consoling I get, but beyond that I’m a slight bit confused.

That is, unless CJ really thinks talking to the cops for her would be a bad move. Then for Wallace, I guess him not wanting rumors about her and Eric being something going around. Which, considering Ananda revealing, in episode 6, might be for the best. Tosh may just disown Ananda but may go nuclear on Lexi who she already didn’t like.

Being that when it rains it pours, Wallace, on top of his guilt from being involved with Eric’s suicide, is pulled over by Coach Magee about the Oxycodone Eric had in his locker. Leading to Wallace placing any and all blame on Alex. Someone who, without much hesitation, Coach Magee accepts as the person who got Eric pills after bullying poor Wallace. Thus making it where Alex is likely to be suspended and also it means Wallace getting beat up again. Except this time it is being filmed so you know they were probably going to go beyond their usual routine.

Luckily for Wallace, though, Jonathan arrives.

Quick question: Jonathan has long known Wallace was getting beat up, chased, and harassed by Alex, is it just this time he saw Wallace running? Is that why now he shows up? Also, isn’t it sad, but telling, how everyone sees this kid being chased but does nothing.

Oh, and another thing, why was everyone, as Wallace walked the halls, looking towards him weirdly? If coach was the first adult to discover the pills in Eric’s locker, why would Wallace’s peers have him on their radar? He is a brainy kid who, outside of drama club, pretty much keeps to himself. Yeah, he hangs out with Jonathan, sometimes, but increasingly it seems Jonathan might hang out with Lexi than Wallace.

Either way, thank goodness for subtitles and being fairly able to recognize voices. Now we just have to see if Jonathan can fight or not. That or he brought people to help ward Alex off.