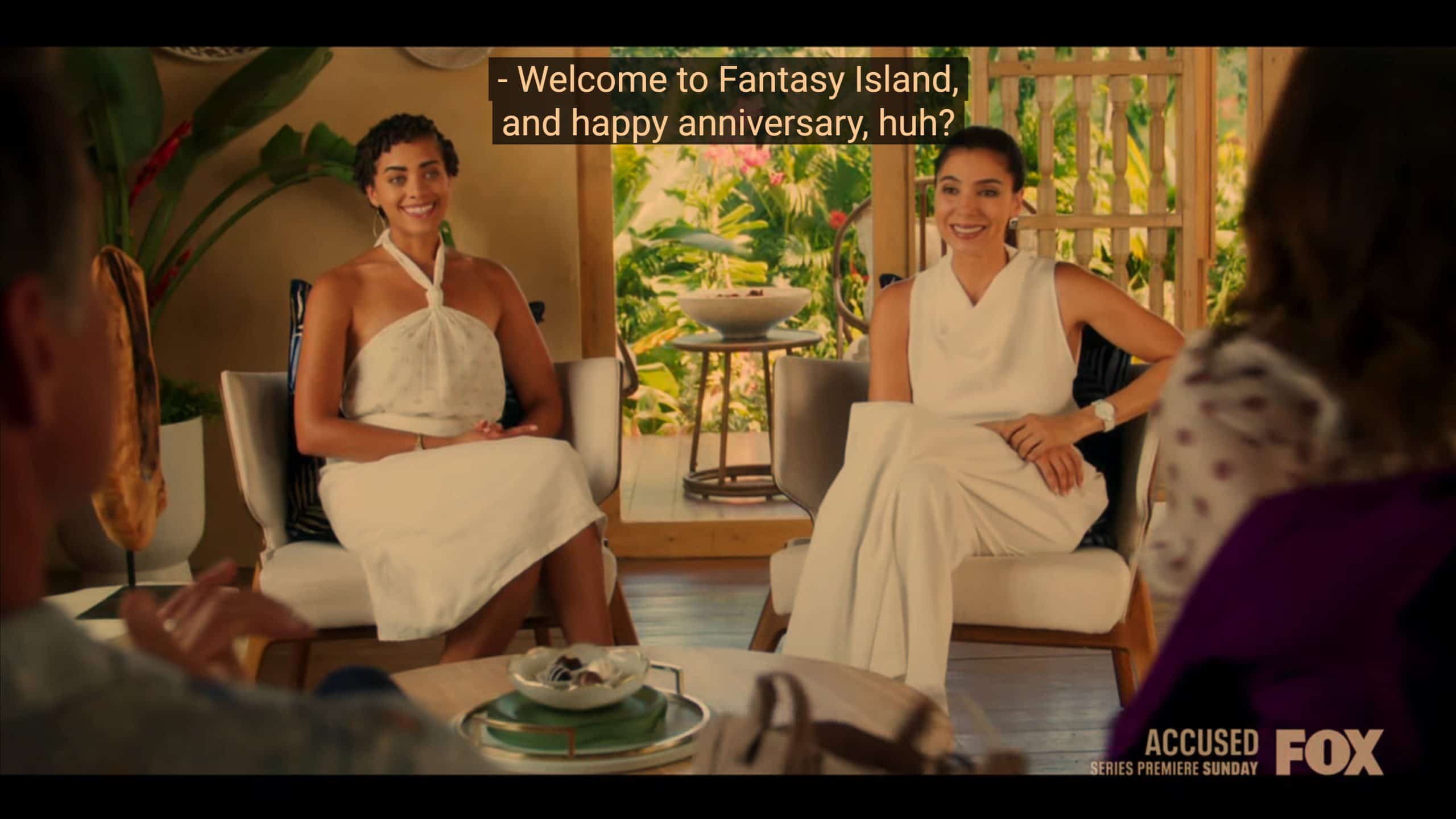 As Javier asks Ruby to get to know Helene, a couple visiting the island is treated as a warning for Elena and Javier’s relationship.

Married at 18, after a short engagement, and together for 34 years. That is what Dolly and Dutch have, and after two kids and a pet, it seems both suspect the other wants to call it quits. Dolly has siphoned over $20,000 from a joint account, Dutch is going to the gym, and the worse is expected. So their fantasy is to see whether they should continue to be married or not, and after Ruby and Elena collect their rings, their specific memories of each other are wiped.

This clean slate could have meant anyone could have ended up on their radar, yet, once again, they found each other, wanted a quick engagement, and as soon as they got married and put their rings back on, they felt tricked. Yet, after being forced into a quicksand game show, the two realized they still loved each other. It is just their communication broke down due to a lack of trust, understanding, and insecurities.

Dolly has been putting money aside since she wanted to go to a poetry retreat she knew Dutch wouldn’t support, and Dutch going to the gym? It is because he is having cardiovascular issues. And with each reveal that explains why the other does something considered annoying, things click into place, and it appears that their love is renewed with knowing the truth.

Trying To Learn From Others Mistakes – Elena, Ruby, Helene, Javier

After watching all that Dolly and Dutch went through, Elena is trying to nip any issues in the bud with Javier. She wants open communication, calling her out if need be, and she explains why she does some of the things she does, which he finds it comical. Mainly because he doesn’t know the context, but even without that, he accepts her having a manic episode and just enjoys having a moment with her.

Switching to the Helene situation, Javier hasn’t made much in the way of inroads due to Helene waking up at 2 in the afternoon and still trying to adjust to having access to a dad. Never mind considering and taking note Javier is her dad. So, because Ruby looks close to Helene’s age, Javier asks her to use that to bond with Helene in ways he can’t.

This is hard for Ruby since she is a 75-year-old woman in a 20-something-year-old body, and even Helene can peep that when Ruby tries to use slang. But, with Ruby making a real effort to get to know her and even open up to her, the two hit it off. Ruby opens up about the Gina situation, and Helene admits that she is torn between seeing Javier as something to hold her steady while admitting she wants to figure herself out and is struggling with that.

To get beyond her issues with Gina, Ruby puts back on her wedding ring to ward people off, but after drinking with Helene and sending a drunk text, she throws the ring into the ocean and seemingly is back on the market. But, with the ring still being a notable memento of her past life and Mel, losing the ring is an instant regret. However, being drunk and swimming in the ocean isn’t an option for her or Helene.

In fact, being as drunk as they are led to Elena getting a text and her and Javier getting the two drunks off the beach and putting them in bed. Elena takes Ruby, with whom she talks about the drunk text, and Helene? Once put to bed, she snuggles this flamingo Javier gave her, thanks him, calls him dad and makes his night.

Ruby Made A Friend

It was clear in season 1 that, while Ruby and Elena can be friends, their interest and so much else differs between them. Elena isn’t that into girly stuff, and while some of it she can appreciate the value of, like camaraderie and friendship, the activities? Not so much.

So for Helene to come into Ruby’s life is a blessing. For one, she is someone who isn’t a co-worker, or boss in Elena’s case, who Ruby can talk to. So while Elena is Helene’s dad’s girlfriend, she now may have someone to vent to. On top of that, Helene only really knows Ruby in this younger body, and while Ruby is open about her life with Mel, her children, and all of that, she gets to have this new slate. Heck, for however long Helene is around, she gets to have someone to truly experience her youth with and make it easier to take advantage of this second life she has been given.

Elena Learning For The Paymers Mistakes

Elena has dated before, and we know she was engaged, but something is different about Javier. Beyond her speaking in the future tense, like they will be married and together for quite some time, she is also nervous. Exposing parts of herself that aren’t cute, or quirky, but can be seen as flaws, and it’s quite adorable. Especially since Javier watches her do this and can tell this is all about her showing how invested she is in their relationship. She wants them together, she wants and loves seeing him be a good dad, and she even realizes, as much as she is the host that arranges people’s fantasies, this doesn’t mean she can gain lessons from the Island’s spells.

While Javier has just discovered he has a daughter, you can imagine there is some guilt for not knowing his kid was out there for over two decades. Add in he is living in paradise, and since Helene’s mom died, who knows what she was doing to survive, and that just adds to the guilt. But, as Ruby noted when it came to Mel co-parenting their kids, Javier wants to try and while he is likely appearing more confident than he is, trying is the majority of the battle. Getting things right is the rest, but that comes with learning what someone wants, needs, and how they are willing to receive help. Something that likely will come in time as Helene becomes willing to lean on Javier, and maybe he finds himself needing to do the same.

Fantasy Island: Season 2/ Episode 3 “Paymer vs. Paymer” – Recap/ Review (with Spoilers)
Overall
“Fantasy Island” continues to balance its guest stars with series regulars in a way that leaves you to wonder, with things going so well, will Ruby being broken up with be the worst thing that will happen?
Highlights
Helene Calling Javier Dad
Elena Learning For The Paymers Mistakes
Ruby Made A Friend
Disputable
82
Subscribe to our mailing list