As Cocoa has trouble fitting in, Shaka is forced to realize how much he stands out in Columbus, Georgia.

With Columbus not being touted as that big of a place, it is only natural that parents set up play dates and kids like Ami are glad to find someone their age. Jade also benefits from this since Ami’s new friend, Lily, happens to be the little sister to Drew. So as their younger siblings play and get to know one another, they get to know each other as well. Technically, they even go on a first date together as they were supposed to chaperone their little sisters to the movies. However, they got so wrapped up into the movie they saw, in the wrong theater, they never mind their siblings who, going by Ami’s age, are 8 years old. Being that Cocoa isn’t from a small town, but has traveled all over, it makes her not just worldly but open-minded. Something that Amelia, Maybelle, and Maybelle’s friend Sister Patty aren’t that receiving to – at first. Especially since Cocoa not only doesn’t dress as they do, but also is beyond thinking Jesus is the only prophet, the bible is the holy book, and things of that nature. Leading to Cocoa feeling a bit uncomfortable as she is teased and, in a shady church way, dressed down a bit.

However, after being called out on it, Amelia looks into the works Cocoa mentions and grows to appreciate other people’s messages.

Why Stunt When You Can Be Humble?: Grayson, Shaka, Sister Patty, Elvis

While Columbus isn’t shown to be a poor town, at the same time, it isn’t upper crust. It’s just the south so a preacher and former back up singer affording a home with two floors and an attic isn’t as expensive as in the northeast and southwest California. Which makes you wonder why it is taking so long for Moz to find a house, but that’s a whole other topic.

What matters here is the establishment that Shaka is making friends, and two of them are Elvis, who is apparently younger than I thought, and Grayson. This new guy, Grayson, is locally known for his hat collection and with Shaka having $260 sneakers, he seemingly is going to be his shoe counterpart. However, Grayson decides to make a bet with Shaka, since he wants to stunt on people, that he can’t stay in the church’s basement for ten minutes, where bodies formerly were prepped. IF he can, he gets his hat collection, but if Shaka can’t, Grayson gets his sneaker collection.

This whole scenario gives Elvis the hibbie jibbies since he is very superstitious. I’m talking throwing salt over his shoulder level. But, in the long run, the scariest thing down there is Sister Patty, for some reason, laying down on a cabinet. Well, and the discovery she has one leg. Making it so the basement challenge is no issue for Shaka. 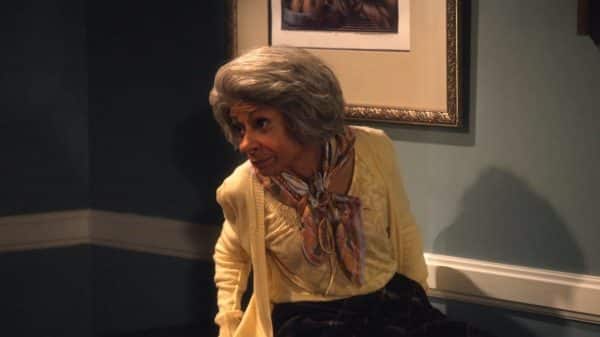 That is until he realizes Grayson can’t really afford to give up his hats and probably made that bet since his shoes have holes in them. Also, it is revealed to Shaka that Grayson’s dad is sick, and mom is struggling with being the only one bringing in income. So getting a couple of pairs of custom $260 sneakers would help the family immensely. Leading to Shaka deciding to, as he drops off food Amelia has prepped, trading Grayson’s shoes for his sneakers.

Calling Out How Judgmental Church Folk Can Be

One of the many reasons people stray from the church isn’t just the interpretations of the Bible, but the people. Sometimes not even the one in the pulpit but those who take on this holier than thou attitude since they frequent church and think that will guarantee them a place in heaven. All the while, they make someone’s life hell and make them feel ostracized.

Which made Cocoa going through that a bit of a surprise to see, yet also appreciated. For it gives you this sense of this show neither attacking church people yet still recognizing not everyone who goes is a saint. They’re simply human, and with Jesus being the shepherd, of course sheep are going to follow whoever seems like the leader and spread their crap everywhere.

Okay, Grayson isn’t nearly homeless or living in a shack. However, between his dad being out of work and mom struggling, the show is touching on that idea that most families are one real struggle from poverty, if not being homeless.

A Reminder Of The Importance Of Church

We’re not trying to make it seem each episode we’re trying to point out how people are flocking from church and this show bringing up prime examples of why. For with the Grayson thing, we’re reminded why church has been such an integral part of the Black community. It acts as a community center, a place to get social services, counseling – by someone who may not be a doctor, and it can feel like a second home.

Also, there is the social aspect of it. Look at Shaka and likely Ami. Shaka met Elvis through vocational bible school, and that led to him meeting Grayson. Then, for Ami, between Cocoa meeting other moms at church, or Amelia’s advisement, that is how she found her new best friend. Heck, church might be how Jade finds one of her first boyfriends.