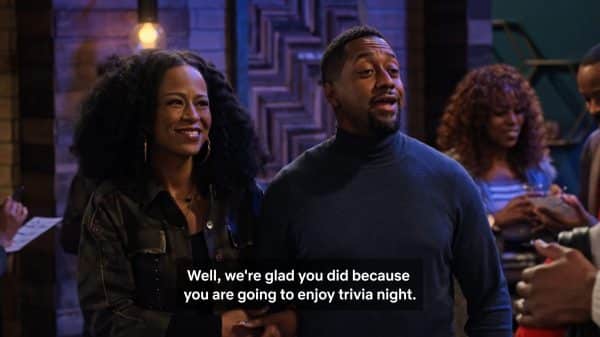 Part 1 of Family Reunion comes to an end with everything that made Columbus seem like a good place to live being undone.

While Cocoa and Moz are playful and happy, there are some red flags as they repeatedly lose in team games to Eric and Katrina. Two people who, with the most basic information, can answer questions with ease. Meanwhile, Cocoa and Moz can’t get a single answer right.

But, they aren’t alone in being out of sync. While Jade and Drew seem to finally be making progress, with local teen gossip Renee even giving Jade a heads up, they hit a roadblock. Actually, it seems Drew might be backing out of being something to Jade altogether. Why? Well, a young man named Kurt. Someone Amelia has Jade show around, and with them being too cozy for Drew’s taste, he cuts things off.

Which may lead you to believe Jade is good since there is Kurt. However, it seems Ava has claimed Kurt too, so there is a conflict. One that we’re left unsure if Kurt initiated or not.

The Talk No One Wants To Have: Elvis, Mazzi, Shaka, Moz, Cocoa, Officer Whitman

With it being noted that the boys are spoiled, they are pushed to work for their money – leading to them mowing lawns in the area. A business which conflicts with Elvis’ long-held territory but he doesn’t get mad. After all, Elvis is but one man with one mower so if he adds Mazzi and Shaka, it means more lawns covered and together they can make more than enough for PlayStations or whatever else.

However, with coming home to an empty house, with so much money, and there being suspicious men reportedly around, Officer Whitman puts them in cuffs. Leading to Moz getting upset and lucky he is a celebrity for that lets his kids go.

But, with the officer treating the three boys the way they did, Moz reports Officer Whitman and his peer. Leading to the Officer, who was suspended two days without pay, harassing Moz and Cocoa. Making it so Cocoa is ready to move back to Seattle for Cocoa doesn’t want to deal with a cop harassing them and especially their kids.

It’s always cute when we’re reminded that just because someone is in their golden years, it doesn’t mean they ain’t still frisky.

Bless Elvis. He has his small business, when Mazzi and Shaka show themselves to be competition he, in good faith, talks about combining forces, and that’s even with him having the better machine and precedence. I mean, I have no idea who Elvis’ parents are, but I hope if we get a part 2, we get to meet them.

The best moments of Family Reunion will always be when it sets aside the fact it is a comedy and gets real. Be it showing the boys, mere children, get put in cuffs and possibly accused of robbing someone or showing how cops may retaliate just because you reported them. What this show does is hit you with a bunch of soft jabs to make you think it is just a run of the mill comedy, with some mocha flavor, then it uppercuts you right in the jaw.

Being In Sync About The Important Things

While there have been many times when characters have overreacted, you have to appreciate that when it comes to Moz and Cocoa’s relationship, that hasn’t happened often – if at all. Yes, sometimes one or the other gets their ego bruised, but when it comes to the important stuff, they are in sync, happy, and things are great. Like, despite them being bad partners in games, we’re reminded the rest of their relationship is easy breezy. Which is important for, in another show, they may play off the fact they can’t win together and make it a big thing. Luckily, Family Reunion takes a different route.

Please don’t have Kurt trying to play both girls. Let him be such a novice with dating he doesn’t realize both have feelings for him. For while I doubt Ava and Jade would beef over a boy, you never know. Heck, who knew Drew would be an insecure little moose and act as he did, just because his boys were there?

Being In Sync About The Important Things - 89%