In its season finale, Double Cross ends as tragic and surprising as it did its first two seasons – but who gets hurt this time?

He just can’t do it. Despite Brian’s mom having a long time influence over him, Tiffany is different, and because he feels so strongly about her, he can’t kill her. Instead, he dismisses his mom, for he no longer needs her protection. This shocks her a bit, but she doesn’t fight him, just embraces her son and fades away. Which makes you wonder if maybe it is because she’ll see him soon?

The reason we say that is, Tiffany revealing Cintron is the father of her son continues to have a ripple effect, and while Erica doesn’t believe her still or claims not to, her resolve is cracking. But, either way, the damage is done, and Cintron is no longer with Erica and pissed Tiffany told anyone and didn’t allow Cintron to control the narrative. 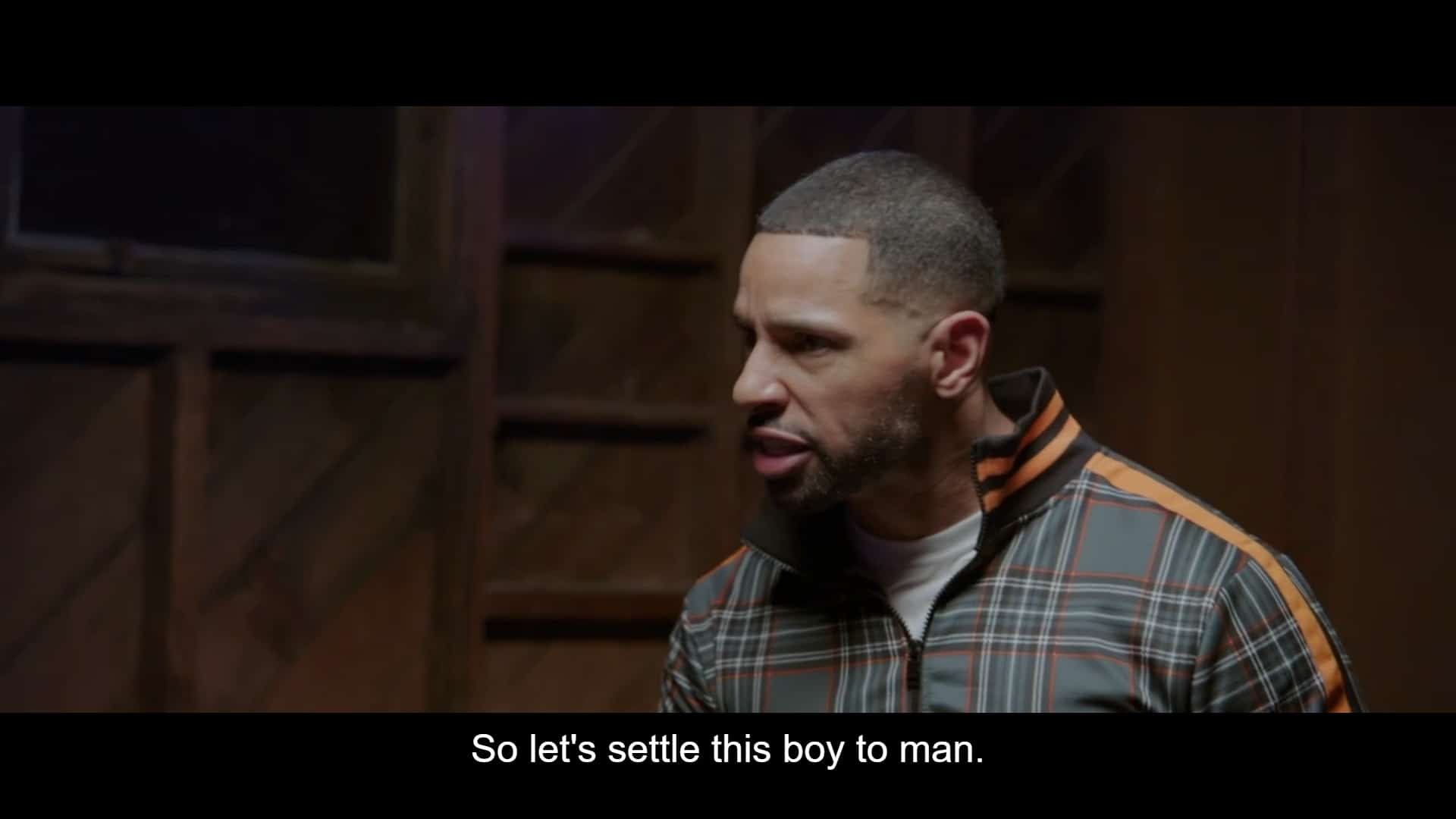 But, upon hearing Brian is the one who told Erica and learning where he lives, Cintron decides it is time for the two to settle things and, originally, it seems Brian was supposed to kill Cintron with a gun. However, something went wrong with the gun, so, like the Looney Toon he is, Brian runs off. But, unlike a Looney Toon, when Cintron accidentally pushes Brian off the roof, it’s unlike he can just walk off that fall. Assuming he is still alive.

With Ryan and Eric coordinating their planned attack, they go to the mansion ready to strike, with Tanya and Erica with them. But, what neither expected was Robin to show up. Thanks to DeAndre knowing the layout of the mansion, due to Mother working with Sinergy for a past auction, she is able to sneak in there. This leads to her getting to Layla before the others and causing a massive amount of chaos after she shoots someone.

This, strangely, doesn’t lead to much in the way of resistance. If anything, the only altercation comes from when Ryan and Robin come face to face, and Eric, alongside Erica, point a gun at him and Chief Pitts, who comes out of nowhere. But, to keep the peace, own up to her transgressions, Robin turns herself over to the police and thus ends the Layla kidnapping case.

Now that the case is over, Ryan just gets his badge back like he never quit and gets to personally put Robin behind bars. As that happens, Tiffany stabs Eric in hopes of killing him just as Erica has killed many, and the season finishes off by showing what led to Michelle’s demise: Chief Pitts. He is Jason’s father who got his son, and Michelle killed, has been stalking Eric, and was the one who knocked out Layla.

Which means season 4 likely will focus on taking him down.

That All Ended Abruptly

It’s easy to forget Double Cross isn’t an hour-long show, despite it leaning towards being a drama. So Brian getting past his mom’s influence, potentially dying, Tiffany attempting to kill Eric, and then Layla’s rescue happening all in one episode, which is a little less than 30 minutes? That doesn’t make sense. But, while the potential end of Brian’s storyline is satisfactory, and Tiffany trying to kill Eric makes for a wonderful cliffhanger, it is hard to not feel disappointed about the end of Layla’s storyline.

Think about all the security and build-up to the auction, and there is one dead body? Sinergy is made out to be this badass group, one akin to Mother’s organization, and their biggest night topples so quickly? I get they are a potentially small-time (read: local) trafficking group, but is it wrong to have expected more? In past seasons we got huge shootouts at the end, buildings burning down! This season finale just feels a bit anti-climatic.

Double Cross: Season 3/ Episode 6 “Dead Or Alive” [Finale] – Recap/ Review (with Spoilers)
Overall
While you do have to appreciate Brian's arc, even Robin sacrificing herself to prevent causing more trouble for her siblings, and the cliffhanger of Tiffany trying to kill Eric, the auction not having a grandeur end is a disappointment.
Highlights
Disputable
That All Ended Abruptly
74
Follow Wherever I Look on Twitter and Instagram, Like us on Facebook, and Subscribe to the YouTube Channel.