The fate of Debra’s family, with John on a warpath, is revealed in the finale and let’s just say nothing goes to trial.

As seen before, John is a psychopath so rather than come after you, he comes after your family. The only question was, between Veronica, Terra, and also Debra’s son and his family, who to go after? Well, with catching John stalking her, it seemed Veronica was going to be the target. After all, it hasn’t been like those two didn’t have a long-standing beef. She clocked him early on and is the reason things have come to this. However, we learn that she wasn’t ultimately his choice.

His actual choice was Terra, but he ended up learning he had the wrong one. Why? Well, remember when Terra was dating that boy and their conversations about zombie survival classes? Let’s just say, when John tried to attack her, those memories kicked in, and when John dropped his knife, she stabbed the absolute hell out of him. I’m talking in his back, in his side, including once in the eye. Thus leaving him a bloody mess but Terra not having to question if she lived. John thought he got the weakest link didn’t he? He thought because Terra is small and so whiny she’d be helpless. Well, let’s be real here, if John didn’t drop that knife then that ditch in the desert would have been Terra’s resting place. But, with that in mind, why go so far as to kidnap someone and murder them? You’re a con artist, one who already has a rap sheet and now a new case to fight. Dude, it was time to wrap it up.

But, what’s a con artist without a confidence level they don’t deserve?

With John’s brain dying, he’s on borrowed time. But him being within hours of being unplugged is one of the least notable things going on. First and foremost, rather than take Debra to her daughter, she is routed to John without warning. Second, while Debra is pushed to make a life or death decision for John, Terra is being questioned by the cops. Which, of course, leads to her saying the type of stuff that, if Debra were John’s first victim, it would have had her in jail – no question.

Luckily, John’s rap sheet, among other things, allows Terra to not have to deal with a trial or anything like that. However, the guilt of killing a man with kids, a family, it weighed on her. Luckily, Denise, despite John being her brother, she absolves Terra of what she did. In a way, it is like what Arlane did for Toby’s father but justifiable.

Speaking of Arlane, after all is said and done, she and Debra talk about what happened. You know, because Arlane maybe the only other person Debra knows who put a member of their family in harm’s way. It is just for Debra, luckily, Terra had the opportunity to fight for her life, unlike Debra’s sister. But that doesn’t take aware endangering your whole family and now putting on your daughter’s conscious having killed someone.

But, it is what it is, and now it is all over. Here is just hoping that was the last terrible marriage Debra had. 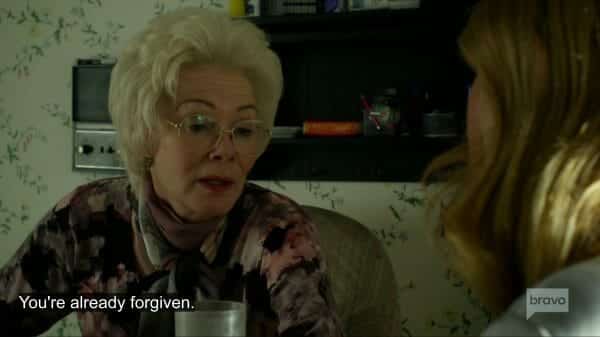 I know I, and many others have questioned Debra’s decisions throughout this, but think about the weight on her conscious. She brought a man into her life that threw everything into chaos and nearly took her daughter’s life. This is following, years before, decades, her sister, in real life, dying because of her husband at the time.

It’s one thing to have a single tragedy hit the family, especially murder, but with what Debra did, she almost made a generational issue. The kind which probably would have haunted Veronica and maybe Debra’s son when it came to his kids. But, taking note of that, you have to admit there is a bit of bravery in telling this story. Foolishness aside, pushing people to be more aware may kill the mystery and part of the romance, but it could also prevent people from making life-altering mistakes.

What kind of mistakes? Well, while we may bag on Debra, let’s not pretend many of us don’t miss warning signs and forgive people we should cut off. Having feelings for someone leads you to allow all kinds of foolishness. Whether it is the kind we see in shows like You or as heard in the R. Kelly documentary. Debra telling her story, letting it be slightly dramatized, and taking the heat for her decisions, may wake someone up as they realize to themselves “This is the kind of dumb s*** Debra would do” and thus they’d get the hell out of dodge or call the cops.

“All expressing anger against inanimate objects does is teach you to associate anger with your own controlled aggression.”
—Mr. O’Neal