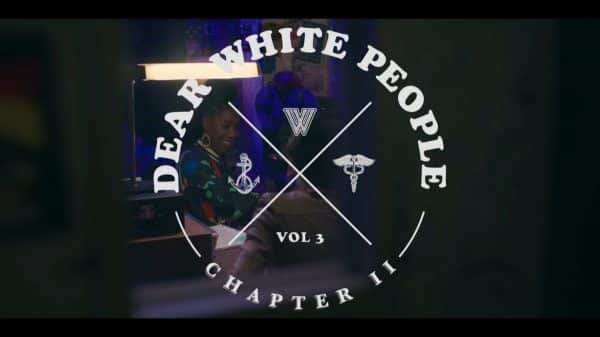 As Joelle continues to figure out how she’ll be as host of Dear White People, Rashid struggles with his role within the Black American community.

Rashid is the only African member of Armstrong Parker, so we’re told, due to, in another dorm, Bechet, Kenyans, and Nigerians having formed what is called “Little Africa.” Which, thanks to a recent suicide, has a new opening waiting for Rashid. Problem is, Rashid has found his place in AP. Leading to his friends questioning why would he hang around, willingly, with Black Americans and deal with their Coming To America voices, among other issues they have with Black Americans?

It’s Hard To Be A Power Couple When Things Are One-Sided: Joelle, Reggie, Rashid, Sam

The answer: Joelle. Rashid has a big thing for Joelle, and even with her becoming Facebook official with Reggie, Rashid maintains hope. Why? Well, because their relationship is awkward. She didn’t claim Reggie at first, seemingly due to a handful of insecurities. Maybe since she has largely stepped into Sam’s space and while Sam has moved on and is struggling with her doc, Joelle is still trying to deal with not being in Sam’s shadow?

Which is hard and maybe, despite Reggie wanting them to be public, that is under the idea that he’d still be the big man, the notable one, and not in Joelle’s shadow? Hence one of the reasons he grows distant and Rashid sees this as an opportunity to swoop in. But, with a swift rejection, so ends Rashid being Joelle’s friend and being a member of Armstrong Parker.

Another factor which is likely affecting Joelle and Reggie’s relationship is a new/ old professor named Moses. A member of the Order of the X, and an alumni. One who returns to Winchester after “Selling Out” as well as making it big in Silicone Valley. But, as for why he left in the first place? Well, considering the way he looks at Muffy, and their bit of flirting, you’d think it was because he has a taste for white girls. However, it was him being put in the same position Reggie was with an armed security officer treating him like a criminal. Which, to return, was one of his stipulations – that security wasn’t armed and dangerous.

But, while everyone is over the moon about Moses and him throwing his weight around, with Reggie becoming his mentee means Joelle being left on her own. This is a problem since, being in a partnership, was helping Joelle thrive. Especially when it comes to CORE, the BSU, and the different groups conflicting. So with Moses coming in, and Reggie acting funny, so comes the question if as soon as they became FB official, whether that was the beginning of the end for Reginelle.

You can only study something so long before you get to wondering if you can actually do it.
— Moses

You know, the secret of social media is that people always pretend to be happy about the things with which they are most insecure.
— Rashid

Being someone who watches The Handmaid’s Tale, I’m not saying the spoof is the funniest thing I’ve seen, but I wouldn’t say its inaccurate either.

Sam has dominated the show since the beginning, and Logan Browning was touted as the unofficial lead of the show. So to see Joelle step into that space, if not the show become a true ensemble, has been quite satisfying. Which isn’t to say we don’t value or enjoy when Sam pops up on screen, but I think after her dad died and the blow-up with Gabe, getting some light duty for a few episodes is by no means terrible.

As seen in She’s Gotta Have It season 2, and now Dear White People, not that it isn’t common outside of Black entertainment, there is a disconnect between Black Americans and Africans who are either from the continent or were raised in Europe. However, usually when the conversation takes place on American shows, it is from the American’s perspective with a bunch of ignorant statements. Maybe even prejudice. So with that flipping and we’re getting the point of view of someone from Kenya and Nigeria, here is hoping we’re not just getting a taste of how the other side feels but this will eventually lead to a conversation.

One of the things Moses pushes is how much he disliked how, as a Black man in tech, he felt like an outsider, isolated, and as if all he was seen for is what money he could make venture capitalist. That is, rather than what he is doing for the culture and trying to change tech to tackle its inherent biases since many of its members are white, rich, and/or non-Black. Which becomes an issue for think about what that means in terms of generational wealth, how data is used, and who is it used for or again? Never mind opening up doors so that, as noted in a recent episode of Good Trouble, unconscious bias over something like an ethnic-sounding name is no longer a barrier, amongst so many other things.

Which is why, even though Joelle is suffering for it, and it makes Reggie look like trash, you have to appreciate Moses connecting with Reggie and taking him under his wing. Here is hoping though, as he peeps Joelle’s reaction, he doesn’t steer homeboy towards the Muffy types.

How It Downplays Someone’s Suicide

How is a show going to open up with two people joyous about a suicide so that their friend can move into their dorm floor? I get the two associates of Rashid probably aren’t fond of the white kids as much as the Black kids, but come on now. Then with Rashid noting it is the 12 double major he knows that killed themselves, that being swept under the rug requires raising an eyebrow.

What’s Going On With Coco?

Like Joelle, Coco has been a stand out character who has gotten her moments in the sun, thanks to the show’s former format of focusing on a character per episode. However, now Coco is seen rushing place to place without much to say and limited screen time. Leaving us with only knowing she is messing around with Kurt and has an 18 credit course load.

How It Downplays Someone’s Suicide - 60%