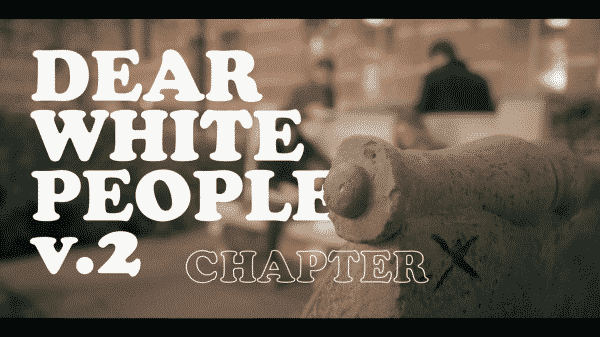 We’re left on a cliffhanger, but do learn who burned down Davis house and get a major development in the secret societies plot.

Prepping For The Next Move: Dean Fairbanks, Troy, Kurt, Coco

As the BSU and CORE prep for Rikki’s arrival, and Al looks into getting the tapes to figure out what happened to Davis hall (Clifton burnt it down thanks to his own stupidity and a microwove), Troy fully plans to stay out of it. In fact, right now his focus is checking in with Kurt and seeing if joining Pastiche is still on the table. Meanwhile, Kurt and Coco are smashing and making plans for the Rikki protest. That is, alongside Dean Fairbanks who decides to visit the all-white public safety department and wish Officer Ames an unpleasant goodbye.

But, jokes on Fairbanks since Ames maybe getting let go but he technically is getting a promotion. He is going to become a state cop thanks to a family member.

Perhaps one of the main things pushed with this episode is that pursuing some sort of win can be futile. Yeah, Officer Ames got fired but now he is a real cop with real power. The situation kind of became worse. Then, in terms of Troy, while joining Pastiche seems like a good idea, comedy-wise, let’s not forget Troy is still experimenting with his style. Unless they are going to leap over him struggling to do comedy and stand up, Pastiche is probably something he is in no way prepared for.

Though, with connections like Kurt, why not use them right? Ain’t that what Coco is doing? Alongside getting it in?

With Carson cancelled but Rikki still on, you may think what is going to happen is protesting outside and that’s it. Nope. Al goes after, and gets, the tapes from Fitzgerald Hall and Sam, she plans to sear Rikki’s edges off. Leading to a very interesting conversation in which, perhaps playing on Tessa Thompson being Sam in the movie version of Dear White People, presenting the idea that young Sam could evolve into some kind of Rikki. Who, by the way, seemingly doesn’t fully believe all the conservative rhetoric she says but, Black woman to woman, she tries to put Sam onto some game. Even talks about them collaborating for the sake of checks and eventually real power.

However, Sam has honor and is way too shocked by how candid Rikki was being so any type of read she was going to do she can’t even process. She just ends up being escorted away and then comes perhaps the true win. Silvio, who has clearly become some type of token minority for the right wing of the campus, introduces Rikki and she learns her audience aren’t her people – in terms of those who swing to the ring.

Thanks to Kurt, and Coco, it is CORE, the BSU, and pretty much the majority of the people of color on campus. Thus creating a very awkward gig for Rikki which, with Sam gone, it seems Coco and the others will get an opportunity to take Rikki to task.

The idea Rikki, and Carson, both hyped up their platform for the sake of money seemed like a serious read of many a social media pundit. Ones who have built their careers facing off against another, almost like a verbal WWE altercation. Perhaps even, in terms of Rikki being “taken down” by Carson, with a planned finish. Yet, really, you have to question do they really feel the way they do or is it just for a check? Is it just a character being played up because, like Sam, they saw inciting people as an opportunity? It’s just, at Rikki’s point, it isn’t just about the conversation but the monetization?

Which, since clearly talking doesn’t bring progress, she plans to use the money she gains to create real change through ownership. Now, as for whether she would flip the script, claim she “evolved” or not? Who knows. Rikki, with her noting this whole persona was born from debate team, is a bit of a mystery.

Neither Sam nor Lionel are having a good day. Sam is still dealing with her father’s death and perhaps the cathartic release she needed in going off on Rikki, she blew it! As for Lionel? He finds out Wesley, like seemingly every other gay man on campus, isn’t much for monogamy. Something he learns after he tops him, which makes things worse since Lionel is the type to say, “I love you” after the first time he has sex. But, considering how long he has probably waited to find someone to connect with, him being so quick to say that isn’t much of a surprise.

What is a surprise is Sam and Lionel combing forces to root out the secret societies on campus. Specifically the Order of the X which they figure out, and has been laid out to us, as a Black secret society. However, whether they still exist or not is the question? Something that, when they find the meeting place they were supposed to find, no one is there.

Thus upsetting Sam, and leading Lionel to flip out because he thought he found the one, but realized Wesley may only just be his beginning. Luckily though, our narrator steps from behind the shadows and into plain view. Seemingly being who will welcome Lionel and Sam into the Order of the X.

So, is the narrator, part of the same group we saw Troy talk with during his episode or are they separate? Also, why did this end here? I mean, the second season finale is better than the first but *bleeping* cliffhangers man. I want to know who burned down the hall and also, can we address how weird it is Sam didn’t get the chance to go off on Silvio. He went all the way in on her, even brought her family into it, yet she didn’t hunt that ass down? I was waiting for that comeuppance for so long.

But, at least with the narrator revealing himself, it could mean this sort of, everything we see happened in the past vibe, maybe being over. Though, I gotta say, I’m curious why Sam and Lionel? Granted, they are the lead characters but beyond that, why these two?

Guess we gotta wait till season 3, not yet confirmed, to come out.