In the penultimate episode of Deadly Class season 1, choices are made. The kind which kills one person, and there surely will be others.

With Chester housed in Shabnam’s house, it means he has traps and more at his disposal as Saya sees on reconnaissance. Leading to the need to expand the crew to include Petra and Billy. Mind you, this is all before a holiday break, so naturally, neither one really wants to give up their break for this. However, Petra decides to give in so Lex follows suit. Leading to him getting some C4 – the reason they needed to speak to him, and the crew getting a few more hands.

After Lex meets with his C4 contact, the group end up at a concert, and while intuition says Marcus should leave, he doesn’t do that. Thus leading him to staying, going in a mosh pit, and in an effort to get to know Saya beyond being her pledge, he asks to learn more. Now, be it because he cared enough to ask her about herself, or to avoid the question, she kisses him. Said act wouldn’t be so bad if she just kissed him and things got awkward, but on top of kissing her back, they have sex.

As you can imagine, this is going to mess Maria all the way up since she has trust issues. However, with Marcus having a clean slate, she at the very least trusted him, but now that trust is broken. Though, to make it worse, it is with the girl she long suspected would do this to her.

It’s D-Day for both Marcus and his group taking out Chester as well as for a series of unfortunate events when it comes to Master Lin. Of which, in return for taking care of her all this time, all he asked of Saya was to be a lookout for his family. Mind you, not specifically, he just wanted her around in case something went down while giving her minimal information. However, she chose Marcus and the Chester over Master Lin which screwed him over royally.

How? Well, first he tries to kill Master Gao, with the help of Brandy and Viktor, and that fails. He then runs home and finds Saya nowhere to be found and Diablo at his kitchen table with his family. As you can imagine, since Diablo is a sensitive man, words are exchanged and next thing we know a fight breaks out. One which, between Shu and Master Lin, things are going surprisingly well. However, then Diablo raises a gun to kill Nahia and Shu takes the bullet. Thus leading to half of Master lin’s lie becoming true but he luckily gets to rescue his daughter.

If you love someone enough to die for them, then you surely will.
— Master Lin

[…] Maybe pretending to be a hero is better than accepting that you’re not one.
— Marcus

The difference between old friends and new friends is that new friends just haven’t let you down yet.
— Maria

Master Lin On The Run 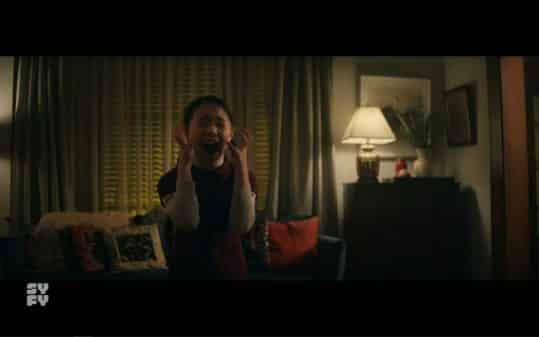 If there is something this show has been missing for quite some time, it is a sense of urgency. For while Chester has Chico’s head and has been making a threat of exposing Marcus, that has been a secondary topic due to Marcus and Maria being together. So with Master Lin trying to kill the head of the guild, using his students as his own personal army, and it being discovered his wife and daughter are alive, this should be interesting.

Don’t get me wrong, Maria and Marcus are cute, but they are a flame which eventually has to go out. On the flip side, you can see longevity when it comes to Saya and Marcus. Think about it, what Maria gives him is passion and what Saya gives him are experiences. There is the kind of trust there which pushes Marcus out of his comfort zone in terms of joining King’s Dominion or getting into a mosh pit. What has Maria given him, in terms of experience, beyond trouble and drama? The kind she’ll never escape unless everyone in Diablo’s crew dies.

Now, this isn’t excusing Marcus and Saya having sex. However, Marcus was wrong for letting things get too far with Maria when Saya clearly had feelings for him. But while Marcus seems to be honest about his past, it seems what he wants for his future, beyond killing Ronald Reagan, he leaves things very murky.

While not big enough of a topic to note in the recap, there is a need to continually acknowledge this couple. For though they aren’t lovey-dovey, there is something solid about them which sets a precedent for what is possible for the others. Making it so you have to hope they survive what Willie is going through, especially as he seems to be on the path to maybe not desiring to be such a pacifist.

This Chester Battle Needs to Be Epic

As noted above, the day in and day out drama of the show has made the threat of Chester a bit mute. What need is there to fear someone on a show which makes their villain more comical than sinister? Heck, even taking Diablo into account, while the actor has presence, he speaks too much to feel threatening. So here is hoping that this fight against Chester is epic to make up for a season which lacked any real opposing threat to our leads. Well, besides them not being honest with one another.

This Chester Battle Needs to Be Epic - 70%