In the penultimate episode of the season, a lot of feelings are aired out, and a familiar threat is presented to challenge Desna’s crew.

While Desna has had blood on her hands, usually there was a struggle of some kind. Killing someone in cold blood hasn’t really been her thing. For while she has crossed many lines and season 1 Desna may not recognize season 3 Desna, at the very least she could say any kill she personally made, was self-defense. Yet, with Benedict pressuring her, killing Melba is made a priority.

Problem is, with her telling Quiet Ann that Mac killed Arlene, and the crew wanting to support Desna, it makes killing Melba harder than it should be. In fact, even with them kidnapping her, this leads to Melba revealing Mac didn’t kill Arlene but Benedict doing so and with Quiet Ann flipping out leads to secrets being spilled. For example, Joe being married, what Polly knows about Joe being Benedict’s mole, and let’s just say things get really messy.

With Clint’s body found and the pressure being on, Toby is questioning what should he do? Clay may say he will protect him, but Roller is on the prowl, and his record of getting revenge is a bit better than Toby’s zaddy. So, he talks about confessing. 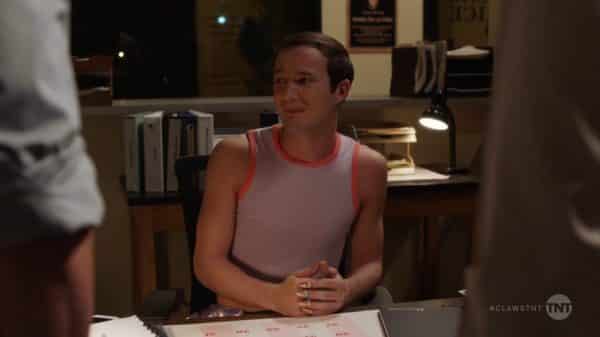 In Clay’s mind, this means going to see a priest, since Toby was raised Catholic, and also molested by a priest. But, what Toby meant was cops. This isn’t known to Clay so while he is killing a priest, with Bryce likely praying he won’t go to hell by association, Toby is setting up the drama to be dealt with in the season finale, and possibly season 4.

Another One Bites The Dust: Melba, Desna, Dean

Tied up in front of the crew, in the nail shop, with the constant threat of being shot must really open a person up. For despite, when Dean arrives, trying to play on his feelings, even noting, before his arrival, she doesn’t believe Desna has the ovaries to shoot her, Melba decides to reveal the truth. She tells Dean that he wasn’t loved, about the plan, and the need to wonder why is strong.

But, with her confession, it does open up another reason for Desna to shoot Melba and be done with it. However, Dean talks about how shooting changes a person, makes it seem Desna is better than that, so that idea is scrapped and Melba is let go. Only to, moments later, get hit by a chicken truck and die.

Letting It All Hang Out

After a certain point, all shows need their characters to let their secrets out, air grievances and release their judgement. It’s required for thing to truly move forward. So Polly’s stuff coming out, Desna being called out, Jenn saying what she really thought of Virginia earlier this season, it is all very much necessary. Especially for a show like this which needs its core group to be connected for, as consistent as the show is when it comes to how it handles its villains, sometimes the villains aren’t going to pop. Mac and Melba surely didn’t. So it makes those core characters and relationships all the more important for a show’s continued survival. 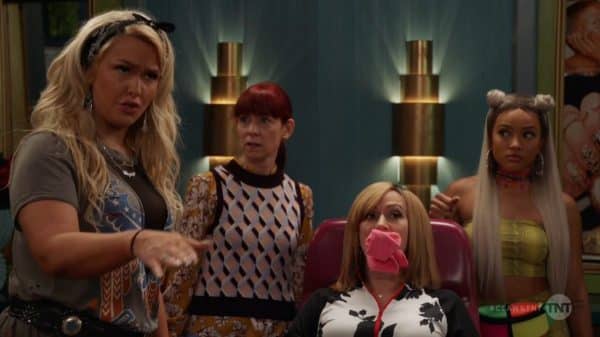 Why Would Melba Confess?

To be fair, Claws doesn’t have the same leniency as Insecure or Atlanta, even Fleabag, in which the entire team can afford to take time off to come up with the best ideas for villains, stories, development, and what have you. Sometimes you just got to turn something in because there is a deadline and punch it up as filming happens. However, Melba deciding to confess after trying to punk Desna made no sense at all.

At least, it made no sense as to why she would do it. In terms of breaking the spell she had over Dean so that he and Desna could reconnect, that made sense. Also, considering maybe the actress who played Melba only wanted to do one season, and didn’t want to evolve like Roller or Clay, that might have been a factor. Either way, while there are reasons for what we saw, it doesn’t take away from a delivery which may leave you hemming and hawing.

We knew Melba wasn’t going to live through the season. Very few people who present themselves as enemies to Desna ever make it past the season. Hell, Roller had to be baptized in swamp water for him to be who he has become. Then, with Clay, he had to be humbled and perhaps the sole reason Clay isn’t plotting on Desna anymore is because, even with her infrastructure of a team being weak considering her assets, she is technically family through Roller. That and her girl Jenn is married into Clay’s family, and they have kids.

So really, what chance did Melba have? Especially when she adopted Dean to use and exploit him. Kill him eventually?

With Clay choosing Toby, it makes sense for him to kill someone who molested him and took advantage of his youth. Yet, with it also working as maybe Clay giving up this peaceful thing Virginia started and didn’t foster much, there is the need to question if Clay was just being put on ice. That, with Desna beyond someone he could touch or help much, Clay was given something to push him maybe evolving. Perhaps have it where, unlike Dr. Ken, he isn’t floundering but still appears to have purpose on this show.

Toby Going To The Cops

While Benedict could be the new Zlata, in terms of training Desna for the next level, what he is not is the kind of villain who can die due to her actions, or around her, without Palmetto getting wiped clean. Also, with him being part of the Triads, and not a local sect but part of a major organization, it means that, unlike the Russians, the Haitians, even Dixie Mafia, he can’t come and go in a snap. He has to last past the season introduced. Which isn’t to say he might not be gone in season 4, but he’s safe for now.

Making it where Toby going to the cops only makes sense. For one, it solves the issue of what to do with Toby since he’s coming to that point of needing prominence. Secondly, as with the ladies of Desna’s crew, Toby has seen and known a lot which has gone down and needs to cleanse himself as much as them.

But, what remains to be seen is whether or not Toby may reveal to Desna, or someone else reveal, he tried to kill her.