Desna starts feeling the pains of being a boss as Mac and Mable assign her duties which may not make big money, but are necessary for the day to day.

After two seasons passing, Brienne’s father, EJ, is released from jail and with Jenn and her girls returning back to their old salon, he finds it easy to track her down. What does he want? Well, to see his kid. Something Jenn isn’t really for since she has some inadequacy issues due to her being white, Bryce being white, and fears Brienne would want to be with someone who looks like her. An idea which Virginia, from the Church of Tanika, pushes along further as she supports the idea of EJ seeing his kid.

Problem is with that, EJ isn’t looking for supervised visits and doing things Jenn’s way. He wants joint custody, and when Jenn and Bryce decide to start something with him, he says now he wants sole custody. 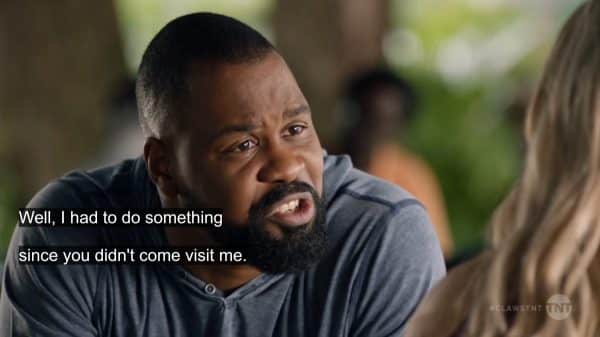 EJ (Bechir Sylvain): Well, I had to do something since you didn’t come visit me.

While Uncle Daddy doesn’t have guilt over Toby trying to kill Desna, the full story of why he killed Bryce and Roller’s father is a whole other thing. One which, after talking to High Priestess Virginia, he decides to reveal to the boys. He recalls how much their mother was abused, but with the culture being a man’s house is his business, he would rebuff their mother and send them right back to the abusive dad. In fact, him doing so is perhaps part of what got her killed since not too long after sending her back she was beaten to death. And after knowing what he allowed happen, his guilt led him to kill their daddy.

This, of course, Roller doesn’t believe, but when Bryce talks about their dad beating their mom with a VCR, it starts to click that it might be true. However, that doesn’t mean Roller is ready to snuggle up to Uncle Daddy and be one of his boys again. Heck, even with Uncle Daddy trying to make the clinic less of a pill mill, it’s doubtful Roller is coming back around anytime soon.

As is made clear, Mac and Melba do not want Desna in their business. They don’t want her learning Mac is part of a fake tribe, that they are working with the governor to launder money, they just want to keep her busy and away from anything major. Hence why Desna is trying to play strength in numbers. She has Polly installed as a co-general manager with Melba’s man Joe, Jenn working as a concierge, and Quiet Ann working security. This is agreed to though neither Melba nor Mac like it. Hell, Joe hates it since Polly tries to pretend to be a spy but is a bumbling one. But, at the very least, this new persona pushes her to effectively dump Ken.

As for everyone else? Well, they pick up on a few minor schemes, and Desna starts to try to make a network of Black women to help her, but lest we forget, she is on a learning curve. So while Melba and Mac’s accountant remains useful, the one she was trying to use to get to Trip, the governor, they die by Joe’s murderess hands.

Perhaps one of the best things about EJ being back is that it pushes a bit of self-awareness when it comes to Jenn and matters of race. For while Desna gives her a certain pass and Jenn seems cool, as we saw with the Brienne flash forward, she can’t be her everything. But what may make this especially interesting is that EJ doesn’t necessarily seem like a bad dude. Yes, he went to jail and seems to be a bit of a hot head, but I don’t recall it being said he was abusive to Jenn or cruel – though I could be wrong.

So, taking note he really just wants to see his kid, Jenn hasn’t even let his family get to know her, and she was never brought to visit, it’s hard to not be on his side a bit. Add in Jenn is most likely to lean on Desna about this and it pushes you to wonder if they may have a tiff since, between her and Dean, their dad wasn’t around so trying to block a Black man from being in his kid’s life might be hard for them. Causing some drama which may veer more towards something authentic than for some head rolls, snappy comebacks, and eventual reconciling since Desna doesn’t really have too many people she can rely on. At least for her more lucrative opportunities.

Black Women Looking Out For Each Other 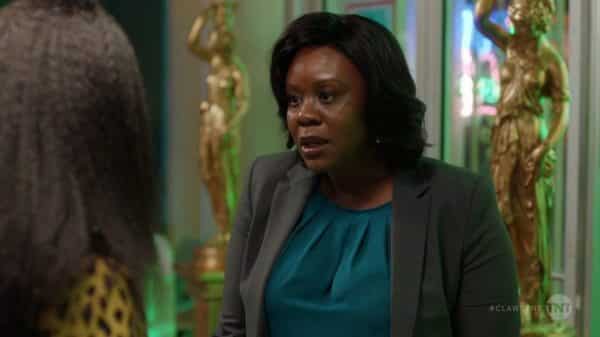 While I can’t say for sure if it is a coincidence or not, I’m enjoying Desna starting to gain Black allies, especially in the form of Black women. Be it Yolanda, who does the books for Mac and Melba, or trying to help out that bodybuilder. For, let’s face it, considering Desna’s ambitions, she doesn’t only need to expand but get people who are qualified. Don’t get me wrong, I love her girls, but while they got personality and can take initiative, a lot of them are out of their depth here. Hell, even Quiet Ann, who is college educated, if I recall correctly, might be useful for muscle but it seems Desna needs someone who can do more than talk a good game or attempt to break up a fight.

It Takes A Lot To Be A Boss

This especially shows as she tries to delegate and that flops a bit. Virginia has issues with handling the alarm system despite the many times she was left in that shop alone. And while things were smooth after, and that is recognized with a promotion, she isn’t the only one driving Desna mad. Yet, handling her, and what Mac and Melba send her is part of the game. Plus, with the way this show is, we know Mac, Melba, and Joe aren’t going to last past this season. So all these menial tasks being sent her way will be good to know when she, or someone else, gets those three killed, arrested, or runs them off.

These two keep you on your toes. Polly is always coming up with a new character, a new backstory, and when forced to get real with people, you almost always have to do a double take. Prime example being when she mentions to Ken that her dad raped her babysitter. Which, if it weren’t for the fact I use captions, I would have to rewatch that scene to double check I heard correctly since Polly’s trauma runs so much deeper than we know. 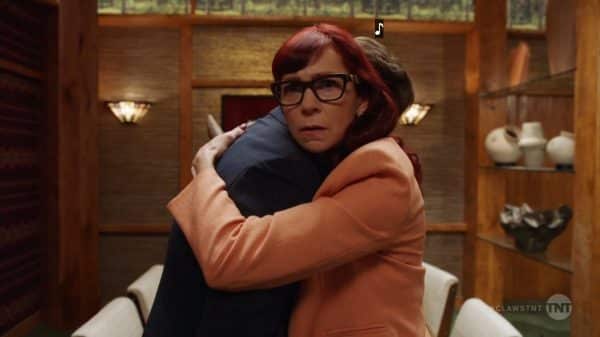 Then with Virginia, what you have to love is that, unlike Quiet Ann and Jenn, her character evolves, shifts, and can stay fresh from season to season. Which isn’t to put down the other two but at this point, all that happens with Quiet Ann and Jenn is drama in their personal life, or with Desna, and we meet people from their past. As individuals, I can’t say much has changed about them or ever will. Now, granted, part of the reason is they are at an age where they know themselves. Also, while they went through stuff, it isn’t on the level of Polly and Virginia who were seriously traumatized.

But with Desna evolving season to season, Polly always switching it up, and Virginia shifting as she gains stability in her life, it makes you wonder if Jenn and Quiet Ann are to remain consistent or they are just forgotten about?

Though I could be wrong, each season does give some idea what is next for Desna and with Mac and Melba in bed with a politician, so comes the question if Desna may run for office? Maybe not governor, but possibly mayor, state senate, alderman, or something of that ilk. Which, to me, would be an experience yet also be a sign this show would need to wrap it up.

There Is A Formula Coming Into Play 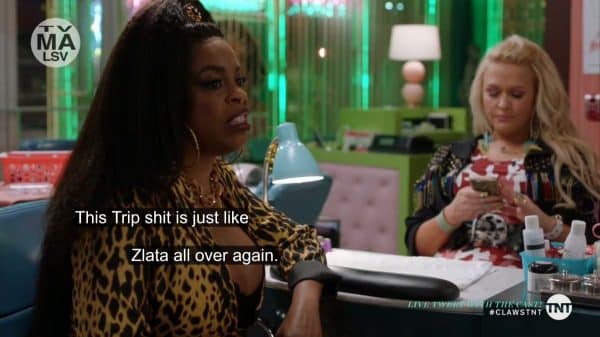 Desna: This Trip s*** is just like Zlata all over again.

As drifted to in the praise above, there are parts of Claws which are starting to feel stagnant. Not just Quiet Ann, and Jenn to a point, but the seasonal villains as well. For who really believes Joe, Melba, and Mac are going to spill over into season 4? For one, they hate Desna with a passion and Melba is quite open about that. On top of that, this show is built on having to escalate. Hence more and more characters getting murdered, having to take things from the streets to a casino, and likely into politics in the future.

But there is the need to question, even with upping Desna’s challenges, Polly eccentrically adapting, and Virginia being a form of comic relief, will that keep this show fresh? For, yeah, they can throw in people from a characters past, new love interest, Roller doing a 180 and being a decent dude, but is that enough? I mean, there is a reason a lot of shows don’t get 4th, 5th, and beyond seasons. So is it time to maybe think up an end game goal besides getting bags, dealing with naysayers, and hope for the best?

Black Women Looking Out For Each Other - 88%

There Is A Formula Coming Into Play - 70%