Wherever I Look
Recaps, Reviews, and So Much More
Home TV Series Claws: Season 2/ Episode 9 “Til Death” – Recap/ Review (with Spoilers)
TV Series

We finally get to “meet” Polly’s twin sister Lillian as Desna makes her final plans for her wedding to Ruval.

Table of Contents show
1 We’re Moving to Tampa: Bryce, Jen, Clay, Roller, Clint, Hank
1.1 Commentary
2 Hidden Assets: Desna, Ruval, Zlata
2.1 Commentary
3 Who I Am, Who We Are: Desna, Polly, Roller, Dean, Virginia
3.1 Commentary
4 Other Noteworthy Facts & Moments
5 Question(s) Left Unanswered
6 Collected Quote(s) & .Gifs
7 Highlights
8 Low Points
9 On The Fence
10 Follow Wherever I Look on Twitter, Like us on Facebook and Subscribe to the YouTube Channel.
10.1 Previous Episode’s Recap
10.2 Check Out Other TV Recaps

The Tampa move has become official. Especially after Bryce stabs Hank in the neck with a flamenco pen. There isn’t really any coming back from that. But, there comes the issue of how to pay for a new life? Jen makes $12 an hour and Bryce has a record. Well, Clay solves that issue, as does Roller, with a stack of money as thick as a grown man’s first. Though, you have to wonder, even if Roller is giving money freely, can the same be said for Clay?

Or is it, with them selling all that coke, Clay is in a giving mood. Especially with Clint around who is coming up with ideas to make more money. Leaving Roller a bit irritated and jealous of not being Clay’s favorite anymore.

For a hot minute, I really thought Hank had a mental illness and, as we see Polly did, snapped. Maybe out of loneliness, or him seriously being troubled. Who knows. But once he signed over those papers and decided to come at Bryce’s neck, did Bryce really have a choice? He tried to turn the other cheek but this man tried to recover some of his dignity by reminding Bryce that the one good thing in his life did him dirty. He had to die.

Though, let’s be real, Hank also had to die since the character jumped the shark. There was no coming back from that random craziness of the last episode. Question is though, will he be the only character to die this season? Clay is reaching a new level of success and is quite messy, as shown by him robbing Hank of his store in broad daylight. So, considering his attitude, alongside Roller, and Clint’s bright ideas, the cops are already aware of them so should we expect, once the Russians and Haitians are used up, a new crime family may show up?

Personally, I’d love to see some Yakuzas or an Asian gang. I can’t be the only one tired of the Columbians, Russians, Italians, and those gangs, right? 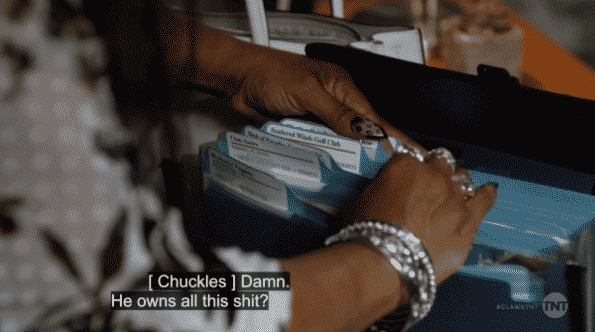 Desna: Damn. He owns all this shit?

With Desna back on board to take Ruval down, Zlata is trying to convince Desna to remain partners after the deed is done. Something Desna isn’t for since there is a serious trust issue when it comes to Zlata. However, as she comes across the multiple million-dollar properties Ruval has, she may reconsider. Though, knowing Ruval, and his mother, more than likely those properties aren’t even in his name. If not, when he dies, they may be setup to go to his mom. So Desna getting too happy about this might be a dumb move.

I’m not 100% sure what we’re building to honestly. I get Desna is now accepting she has mob boss potential but is she looking to become a kingpin? Also, she is out on bail – where is Arlene and her partner? You’d think they would be watching Desna and her associates even closer than before. Especially with what they got on Ken’s wire.

But maybe that was just supposed to be a tap on the wrist? I don’t know. For while Ken reveals he was the one who snitched, which just leads to yelling and stank eyes, it’s almost like Desna getting arrested was an obligation to get out of the way.

Who I Am, Who We Are: Desna, Polly, Roller, Dean, Virginia 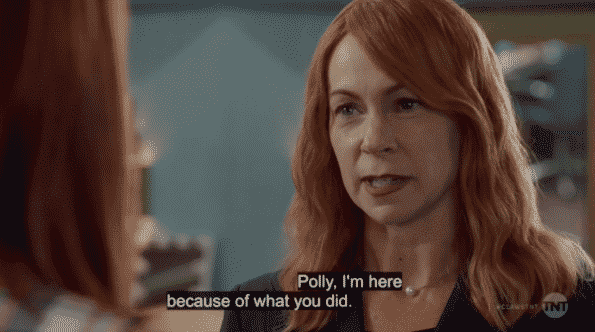 Lillian: Polly, I’m here because of what you did.

Remember Lillian? Polly’s twin who lives in Seattle and got talked about so much this season it made you wonder if she was ever mentioned in the first one? Well, we meet her. Alright, a mirage of her. For it seems breaking up with Dr. Ken and Marnie leaving to be with her mom, it breaks something in Polly. Leading to her having a legit, doctor diagnosed, psychotic break. All from the guilt of murdering her sister, when she was 13. How? Well, she pushed her onto thin ice, the ice broke, and her sister drowned. And, mind you, she did try to save her, but only once she realized her sister was dying. By then, however, it was too late.

Luckily, despite all the other nonsense going on, Desna and the rest of the crew are there for her. Desna doesn’t even judge Polly’s murder confession. In fact, it just leads her to realize, more and more, their talents don’t lay in legit business. Each one of them, for some reason or another, are good at being criminals. Something none of them like to admit, but it might be time to accept and own it.

Leading to us talking about Virginia and Dean. Everyone’s favorite odd couple are continuing to show themselves as the most stable. For between Virginia making their new room up to Dean’s standards to him and Desna reconciling, it is one beautiful moment after the next. The kind which could leave you teary-eyed. Especially with Desna saying she is proud of Dean and Dean asking to give Desna away at her fake wedding. 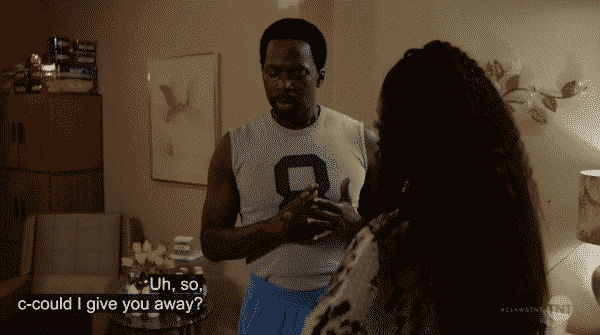 So, I think we can all agree that something is going to happen at the wedding to leave it in shambles but, with a priest already paid for, more than likely Virginia and Dean will get married instead. We can all agree to that right? It seems like what should and likely will happen right? Just checking.

That aside, with Desna saying she is going all in, It really does make you wonder what the future of this show will be. Will Desna look to be on a Clay level, Zlata level, or beyond? How will she handle the fighting amongst gangs? Will there be negotiations or will she be taking people down? Also, considering Ann ain’t really for what she is doing now, and Jennifer is talking about leaving to Tampa, can she run a crew just with Virginia and Polly? Will she perhaps gain new people?

Let me stop playing as if any characters would actually get written off. The bigger question is what will change their minds into staying? Ann especially since she lost Arlene and has no desire, what so ever, to head back to prison. So how can Desna convince her to stay as she fully commits to becoming a queen within the underworld?