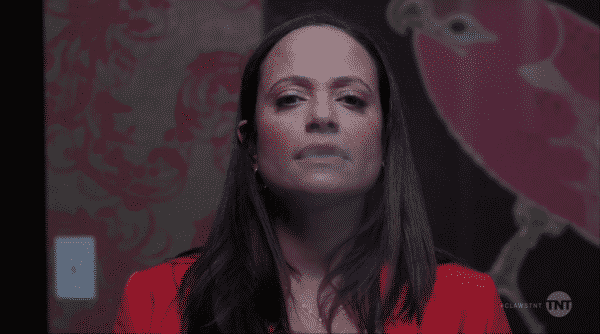 Quiet Ann comes into full focus as her family, inner thoughts, and a few things she has been holding back are revealed.

Being that Zlata mixes business with personal, her presence is getting a bit annoying for many. Especially Quiet Ann who has not gained much, if anything, from her takeover. Yes, as Desna makes clear, they have more money than ever but a lot has stayed the same. Quiet Ann is still some kind of errand girl and she is forced to watch Desna get all she desires as Ann sits alone most of the time, pining over Arlene. Well, when she doesn’t have to step into Desna’s former role and make sure Jennifer goes to AA.

But, during and after AA, something interesting happens. One, Bryce says he is going to divorce Jennifer and two, Clay talks about taking out Zlata. Something that leaves Desna between a rock and a hard place for she has become comfortable, happy perhaps, in this new life. Add in learning Ruval may propose and it seems she has nothing but bliss.

While it makes sense for us to get into Quiet Ann’s head, since she is a bit trapped in there it seems, you have to wonder if other characters’ perspectives may be focused on as well. As seen, Desna is sort of on auto-pilot right now. Her biggest issue is whether to betray Zlata or not so getting to see what life is for Ann, Jennifer, Polly, Dean, even Virginia for an episode could be cool. Especially since, the way Ann talks, it seems they all may feel some form of neglect to varying degrees. Which, considering what’s to come is going to make things hard on Desna.

After all, reporting to Zlata what Clay’s plans are means him dying and likely Bryce too. So, divorce request or not, Jennifer may not go for that. Then, knowing Zlata, she may go after Jennifer, who you know would use that information to get back on Bryce’s good side. Thus making it where Desna has to decide between this rather cushy life she has now and either returning to the old one or starting a new one where Clay and the Dixie mafia are enemies.

Needless to say, loyalties surely will be tested and Quiet Ann’s loyalty has been tried and certainly is at the point it may go beyond bending and may just break.

It Runs In The Family: Henry, Quiet Ann

And why is Quiet Ann’s loyalty so strained right now? Well, it is because, once Desna pushed her to her limits, it didn’t really leave her with much. While cool with the rest of Desna’s girls, Arlene was the only one who was completely Ann’s. For, as noted by her brother Henry, they haven’t seen each other in about 4 years. Partly because he is into politics but also because Ann was never accepted for being queer, getting rid of her ex, and going to jail.

Well, at least that’s what she thought. Truth is, not only do her parents not care she is queer, nor her brother who is in the closet, but both her parents are each other’s beards. Yes, they are one big gay family and the reason they are so hard on Ann is because she is not living up to her potential. She has a degree, knows 5 languages, and yet she plays a security guard for a nail salon. All that potential, even with a record, wasted on guarding a nail salon in a crappy area.

Which for them, Cubans in exile, is disappointing. Henry is a state senator who plans to run for governor and talks about being president one day. A 1st generation Cuban American in the oval office. There is pride in that but what pride does Ann give them besides being able to love who she wants freely?

Since episode 1 a lot of the focus has been on Desna bettering herself, Zlata causing a spark, and how she may turn to the dark side. Well, as talked about more in the next topic, what happens if Ann decides to do the same, without Zlata, and heads towards the light? Don’t get me wrong, I don’t think she’ll screw over Desna intentionally, but it seems Desna may have taken Ann as far as she can go in her recovery. At this point, Ann seems to want to pick up from where she once was and with it being clear the only issue her family has with her is not living up to her potential? Psh, she may get a jump start on that.

For, at the end of the day, it seems Ann is a very passionate person whose only outlet now is being hired muscle. Which, with the way Zlata runs things, Ann isn’t Desna’s muscle but Zlata’s. Also, being that Ann worked for Desna because that was her friend, not her boss, things have changed. So, like everyone else, maybe Ann may change with the times rather than sulk and suffer.

No One Can Read Your Mind: Desna, Quiet Ann, Polly, Arlene, Ken

Up until having a sit-down meal with her family, Ann has pretty much just clued us into what she was thinking most of the time. However, after outing her brother and this leading to the truth about her parents coming out, she finds herself telling the truth at the salon as well. Well, not in the most healthy ways mind you. It begins with Ann hating on Desna while feeling crappy about herself and eventually leads to a shoving match and Ann smacking Desna.

Following this, as Ann tries to cool off, Polly goes to talk to her and gets told off and finally, Desna takes note something is wrong. Thus leading to Ann talking about her pain and loneliness and Desna noting she can’t read Ann’s mind to know when she needs help. That and she should go get her girl.

Leading to Ann parking outside Arlene’s house, knocking on her door, calling, and actually getting through. Leaving us with a few things: The first being that Arlene is single and maybe may reconcile with Ann. Also, she has a new partner who seems a bit aggressive. Lastly, Dr. Ken just went down and seeing that Dr. Ken is a bit of a weasel, it should be interesting to see whose name he names.

So between Arlene maybe using Ann to snitch to Dr. Ken snitching, someone obviously is going to bring down all Desna has worked for all this time. The question is though, will she be directly hit or just be affected by Clay or Zlata being taken down? Also, will Arlene genuinely get back with her or, after Ann’s confession will this just be karma? As we got reminded, Ann has a record of violence and I’m sure Zlata isn’t just doing business deals with no one dying but her sister – a murder strangely yet to be investigated. Plus, with Chip returning in the last episode, and Arlene in this one, there is the reminder that cops do exist in this universe. They aren’t just local legends.

Making you really wonder, with Desna now a lieutenant and surely soon to be expected to get blood on her hands, will she end up Arlene’s target? Much less, between Clay, Zlata, and Desna’s girls, will they have her back or leave her hanging? Especially Clay who may have a strong focus on Zlata, but surely doesn’t seem all that fond of Desna trying to boss him and his family around either. And you know that man can hold a grudge.