Desna may actually have a quality man in her life. But will he be willing, and able, to deal with her being a rock for so many people?

It’s amazing how clear racism is even if it’s spoken in another language.

Girl, can you come down off the cross? We need the wood. Gladys, known as Ms. Honeychild unless you want to get shocked, is really testing the limits of Roller’s endurance. Never mind she is forcing him to live some sort of fantasy, but she has him chained and shocks him like a dog. On top of that, she makes pubic hair art and makes sure he has no access to the outside world. Effectively, he is a slave to this woman. Yet, when there is a will there is a way and between taking her out or escaping through sheer luck, Roller will be free. One way or another.

In a way, Gladys reminds me of Polly. Someone with a desire to have this grandeur and luxurious life and is willing to do what it takes to have it. Though, while Polly feels the need to be recognized, Gladys seems to be fine with her dreams not leaving her swamp land. Which surely will make things hard for Roller, unless he becomes willing to kill Gladys.

Which I’m not saying is necessary, but outside of her slipping up, like when she almost left her phone, what are the other options? Trying to convince her to meet his family, say he’ll marry her, or something like that? Is Roller smart enough to outwit this woman?

I ask that because, for weeks now, Roller has been touted as a dummy. So him making plans, and succeeding to trick someone, seems a bit off.

Who Can I Run To?: Dr. Ken, Virginia, Desna, Gregory (Jimmy Jean-Louis)

Life has gotten a bit crazy for Desna as of late. The Coombs have been murdered, she gets the shop from Ms. Kim, but because of a back and forth between them Ms. Kim, and her crew flood the place. Then, to top things off, she forgets her money when trying to buy some food. And, despite the attendant seeing her daily, to the point he knows her name and can see where she works, he won’t give her credit.

Luckily, Dr. Gregory Ruval shows up to her rescue as well as asks her on a date. Of which, their first two get ruined. The first by Dr. Ken getting paranoid about a cop stake out, in which it is just Ann getting eating out by Arlene. Then Virginia, who feels slighted when she is made an alternate for Nail Palm, deciding to do some freaky stuff Relevance is into since she thinks she is on her own. 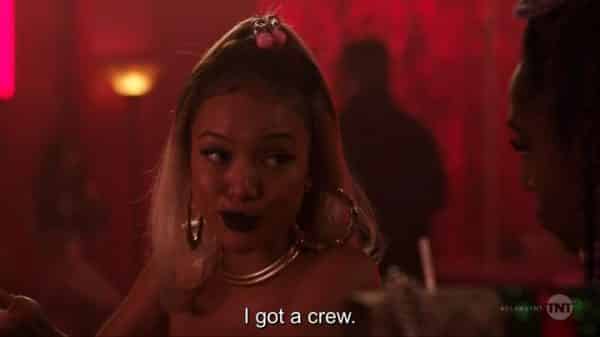 I seriously hope a junkie kills Dr. Ken. He isn’t a bad guy, but he is so annoying that I just want to see him taken out like how the Coombs were. Which, who knows, with Arlene may be smarter than Chip gives her credit for, maybe she may coerce Dr. Ken into snitching and he gets popped for being around cops not on the payroll? 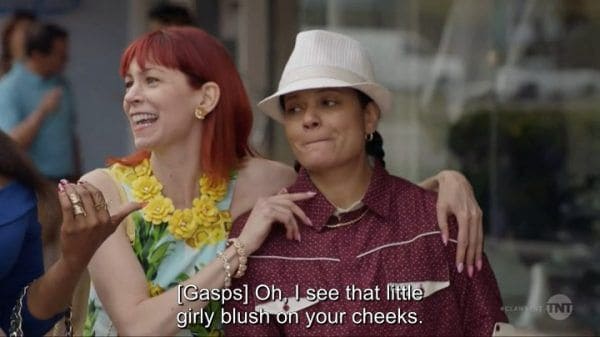 But speaking of Arlene, her and Ann’s relationship leads me to wonder how many women Ann has been with? Not sexually but in an actual relationship. For with us learning she was married to a man before, and us only seeing her be a player thus far, it makes the idea of everyone saying she can’t be with Arlene kind of messed up to me. Yes, Arlene is a cop, but Uncle Daddy got Chip and I’m sure with all the drama in Desna’s life, she could use a friend of a friend on the force. Especially with the mess Virginia gets in.

Which was a bit impulsive to me. I get the girl got issues with wanting to belong and all that, but no one was firing her. She was made an alternate. Virginia was still part of the crew! Has life really messed her up so much that even the slightest feeling of rejection sends her back to her former unscrupulous lifestyle?

You know, at times I almost wonder if Virginia is a fed because the way she plays Desna sometimes makes me think there has to be more to her than meets the eye.

Leaving Gregory. Like with Ann, I wonder a little bit about Desna’s relationship history. With the way the Coombs treated her, likely she dated a whole bunch of losers until she became the woman she is now, but I wonder who was the breaking point? What man treating her a certain kind of way eventually led to this proud and beautiful Desna? Hell, what person, or thing, in general, gave her all this confidence? Was it just something she picked up to survive? Jenn and Bryce are gifted a house by Uncle Daddy for their work in the clinic and Bryce is asked to make the clinic a full-time thing. Something Jenn originally was against until presented with a mansion. If only for what it would mean for her kids — no joke.

But, with her presenting the news to everyone does come some envy from Desna. If only because, during the Roller saga, she really busted her ass for Uncle Daddy and he played her. Yet, Bryce works a few weeks or so, heavily relying on Desna for guidance, and he gets this huge gift? Granted, he killed Roller’s assumed killers but come on!

The disagreement about the house combined with Jenn injuring herself really puts Desna on edge. Which makes Nail Palm a nail biting experience. Not just because the still in training Virginia now is part of the team but when it comes to the finals, where Desna, through nail work, has to show who she is, she is lost how to answer that. Is she all the negative things people have said or the positive? Well, thanks to some cheering from her biggest critic, Jenn, she pulls out a win and $15,000. More than enough money to reverse the damage Ms. Kim, and her crew, did to Desna’s new nail salon.[note]Gregory shows up with flowers and agrees to drinks with Desna and the girls. Meaning he may not have given up on her just yet.[/note] [note]Jenn learns about what the Coombs did to Dean and seemingly may have begun making the necessary connections to know what Desna setup.[/note]

There was this vibe in the beginning that someone was going to snitch on someone else. So, with that in mind, I do wonder if, to protect her biological family, Jenn would snitch on Desna and let Dean be collateral damage? For with Bryce being the first good man in her life, and her now having the type of life I’m sure she has only dreamed of, is her relationship with Desna strong enough to handle all that is to come?

For despite what Chip thinks, Arlene isn’t stupid. She could very well be playing with Quiet Ann to get in closer. And while Jenn has accepted the Dixie Mafia into her life, with that comes questions of loyalty. After all, Desna is, and always will be, an outsider. A foot soldier if you will. One who has no love for the family business and when the real feds come raining down, of course, she has to think about Dean the way Jenn thinks about Bryce and her kids. So will Jenn fight to just have Uncle Daddy taken down and deal with Bryce’s feelings about it later or make the easy choice? The one which leads Desna to jail or 6 feet under?

Well, that is something to worry about later down the line since, as of now, moving into that new salon is all that matters. That and Desna getting some Gregory. Who I cannot wait for Dean to meet and react to.