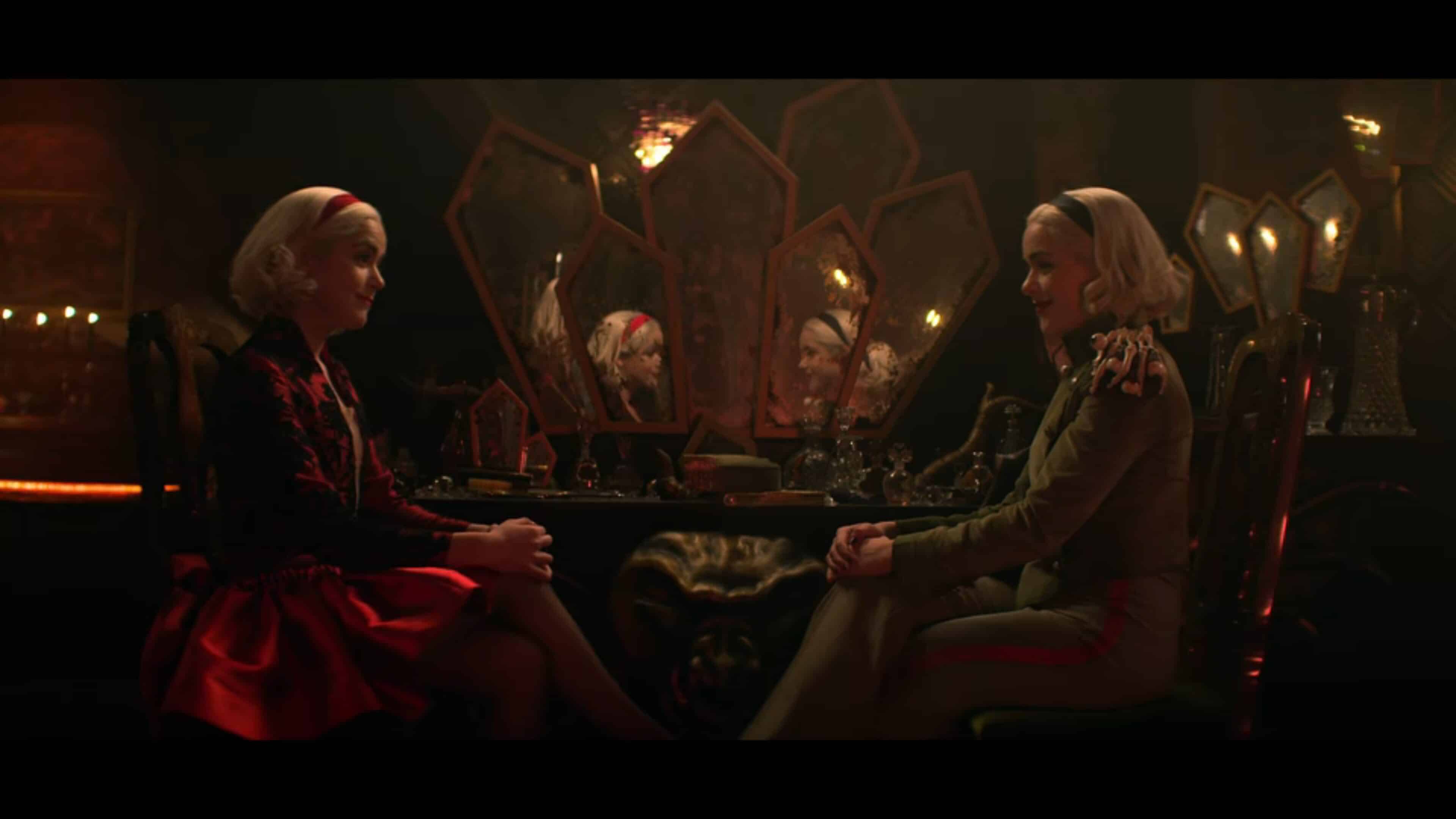 The Chilling Adventures of Sabrina returns with the first Eldritch arriving, and the fight is… underwhelming. As if Sabrina’s issues with being single once again.

Father Blackwood has a new church, and Abigail seems to be a missionary for it. One who claims to be his wife, though who knows if that is just a story she tells? But, what is known for sure is that Ms. Wardwell, traumatized by all that happened while Lilith took over, is one of their most recent recruits. Leading you to wonder, will she be a pawn or Queen in what’s to come?

With Sabrina not dating, it has left her realizing that when not saving the world in some way, she doesn’t have much to do or anyone to hang out with, besides Ambrose. For with the band over, Fright Club on hiatus, it seems Theo, Robin, Roz, and Harvey just want to hang out and make out with their partners. Heck, even Hilda and Zelda are more focused on their partners and their work, of course, than anything else.

But, luckily, rather than deal with Nick and Prudence back together, Sabrina is able to recruit Hilda to get the Fright Club back together. Though, after a fun adventure, Roz calls out Sabrina for her cunning allows her to know the truth – that she setup everyone to cause this reunion. Leading to a conversation in which Sabrina is forced to realize how much she has grown and done over the years, and her friends were left behind and protected. Thus allowing them to have normalcy while Sabrina was shielding them from immense trauma. Never mind living dual lives, which often she kept secret from them the full extent of.

How Sabrina Got Her Groove Back – Sabrina, Roz, Ambrose

Though, as Roz says, they will always be friends, and what better way to cement a friendship than a new big evil coming to town? One that is simply a hollowing darkness that leads to Sabrina to speak to her doppelgänger in Hell and arrange with Ambrose her coming to town and heading into the minds. Because, you know, the mines have everything. There is a portal to Hell, the source of the end of the world, and who knows what else?

To make a rather forgettable episode short, the Sabrinas defeat the first Eldritch with the Order of Hecate’s help, and to ease her loneliness, Sabrina accepts dates from one mortal and one witch. Now, as for whether this is the last we see of Sabrina Morningstar? That isn’t likely as it seems each episode will feature an Eldritch, and next time, the Pilgrims of the Night won’t just stand by.

The Chilling Adventures of Sabrina is in its final season and honestly seems like it is on its last legs as well. But, while escalation is what makes most shows wear themselves out, at this point, it seems like the show has likely run out of tricks. Yes, two Sabrinas are better than one but with them having the same personality? It doesn’t push anything beyond thinking maybe the show is soon to jump the shark.

Leaving the only silver lining being that Ambrose was right about a parallel universe colliding with their own, as the Hilda and Zelda we know from Melissa Joan Hart’s Sabrina The Teenaged Witch are due later this season.

As Chilling Adventures of Sabrina enters its last season, so comes the feeling it is exiting just as it is beginning to overstay its welcome.