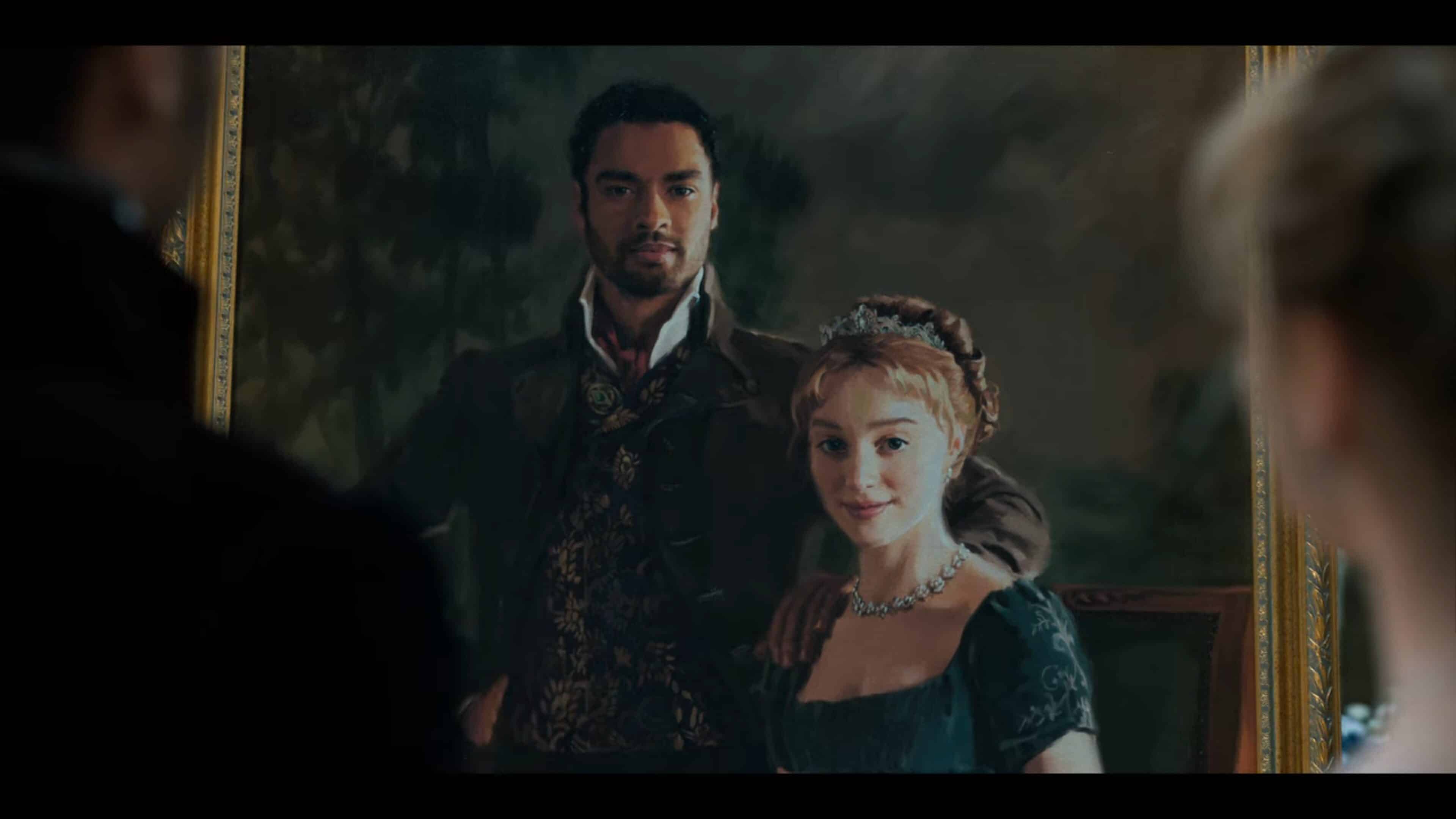 Despite what was thought before, we learn the true identity of Lady Whistledown as the direction of Daphne and Simon’s relationship becomes clear.

Is A Man’s Word Not A Commodity? – Archibald, Portia, Will, Alice, Simon

Archibald, with his massive debt, has seen Will as a means to recover his fortunes. The issue with this, as shown in the previous episode, is Will has pride but also has a family to take care of. As seen, he has multiple children, all young, and fighting isn’t something he can do forever. Yes, he is fighting like Mike Tyson right now, but there will come a point where he won’t only lose but will deal with the wear and tear of fights.

So it leads Will to seriously consider taking a loss and getting a cut from the bet, as Archibald proposes. This, for Simon, doesn’t make sense, yet lest we forget, Simon operates from a point of privilege. Also, as Will points out, Simon still operates from a selfish place when it comes to his marriage. Hence why Will takes the fall and rather than be mad, Alice is joyous over her diamonds, new dress, and financial security. Now, as for how much did Archibald win? That’s not quantified. The only thing that is made clear is he kept half and that seemed enough to pay his debts and get his daughters new dresses. But, for fixing the fight he pays for it with his life.

Thanks to Daphne, we learn Sir George died in battle but his brother, Sir Phillip, does arrive with the reveal he planned to marry Marina and take responsibility. This is devastating news but perhaps not as devastating as Marina learning, despite the tea she drank, she is still very much pregnant. Thus making Phillip’s proposal something she is forced to settle for since she has no other option.

Speaking of options, for a moment Siena seemed to be an option once more for Anthony as they exchanged glances, similar to how Daphne and Simon did when they witnessed Will fight. However, after some hanky panky, Siena seems to snap out of the daydream and into reality. One in which she can’t fathom the idea of living a privileged life where balls and children are her sources of entertainment. For while being taken care of is nice, have you ever heard Siena say she hated her job? One she surely couldn’t do as Anthony’s wife.

Leaving one last thing: Lady Whistledown. We’ve been under the impression Genevieve was Whistledown but the truth is, it was Penelope! At least we’re geared to think so for as Penelope is forced out of her home, thanks to the family seemingly losing everything, Penelope seems fine. Also, in her lap is a Whistledown letter which points to the idea either she is Whistledown or part of the network which created Whistledown.

Daphne has been chipping away at the wall around Simon’s heart and with discovering the letters Simon wrote to his father, and Lady Danbury offering clarification, it all clicks into place. And seemingly, if Simon was just open about his past, all of this marital drama wouldn’t have been a thing. Mind you, the two would have still had issues, but it could have just been their banter going too far. Not Simon icing her out to the point Daphne is prepping for living a separate life or talking with Violet like she is ready for divorce (as if that would be allowed).

But, in the end, they reconcile, Simon gets over himself, they have enjoyable, child-bearing sex, and Daphne ends up giving birth to a boy.

You’re angry, but not with me. So take it somewhere else and finally do something about it.
— Will

[…] You are lost and I cannot allow you to set me adrift as well.
— Siena

Pride will cost you everything and leave you with nothing.
— Lady Danbury

Let us not romanticize what could be considered emotional abuse, since Simon’s cruelty definitely took advantage of Daphne’s lack of options in annulling the marriage and making her way onto another suitor. However, taking note this is TV and toxic situations is how they often craft drama, we must say we did enjoy watching Daphne learn to love a man who thought himself unlovable.

Did he deserve it? That’s debatable. After all, no one should have to fight to be loved the way Daphne did. Especially considering how young she is and Simon should know better at this point. I mean, Lady Danbury surely didn’t raise him to be an ass. But, that aside, it’s nice to see if they do have any issues in the future, it’ll be Simon figuring out how to be the father he didn’t have.

Lady Violet and Lady Portia had two different marriages. Lady Violet always spoke longingly of her husband, and her longing for him was made clear. As for Lady Portia? I don’t think we even saw her hug the man. Yet, even with it being within the context of what marriage was back then, I appreciated her bringing a less lovey-dovey view.

When speaking of Archibald, she notes she learned to love the little things, which aren’t specifically named, and then the big things, like her children. And in a show which largely focused on romance, it was nice to be reminded that, beyond Marina, some had to focus on survival and making due with what was presented to them. For it long had seemed Marina was one of the few who may have to marry someone for security, if not out of desperation. Yet, with Lady Portia peeling back some layers, you are reminded she isn’t alone. It’s just the options were likely fewer for women a generation ago.

Siena Looking Out For Herself

When it comes to those in high society, they mostly didn’t abuse their position when it came to those who didn’t get to live lofty lives. Daphne was kind to villagers, as well as her handmaid, and for Lady Portia, her handmaid was her co-conspirator and best friend. Yet, there was always a reminder through Siena and Genevieve that many had different lives. Heck, I’d even throw Alice in there as well.

For at the end of the day, there wasn’t a season dedicated to them debuting and finding a husband. Could they find love, with a good man? Yes. Alice proves that. However, Alice and Will are clearly made to be an anomaly compared to everyone else who struggle in their relationships, courting, and marriages. Which isn’t to say, as Will has noted, there isn’t’ a struggle. But there is at the very least trust. 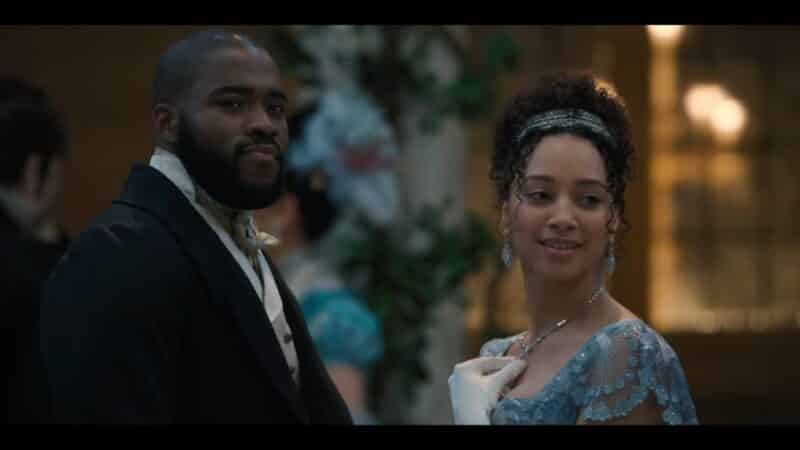 With Siena, that trust has long been broken and she doesn’t have the luxury Daphne has. She cannot weather a back and forth love story and believe, because she gets pregnant, it means Anthony will be obligated to marry her. He can’t even be relied upon to show up to her shows. So her focusing on the man who kept his word versus the one who tries, and means well, it is worthy of applause.

Heck, it even shows, despite the hardships she has, she is far freer than any of the rich girls we see.

The Death of Archibald

Archibald’s death didn’t really shake the table. He was barely featured more than his older daughters and has mainly been defined by his gambling debts. So while you can see Lady Portia is devastated it seems less about love and her new financial situation. Making it where it seems this was more about setting up her next chapter than to add shock to the finale.

Let’s remember how Eloise painted Lady Whistledown. She was someone who is invited to parties, yet invisible. Of wealth, yet unattached. Also, assumed to be a widow since it couldn’t be imagined she had someone. In a sad way, Eloise was describing her best friend and presenting the concept of how women who look like Penelope are seen. 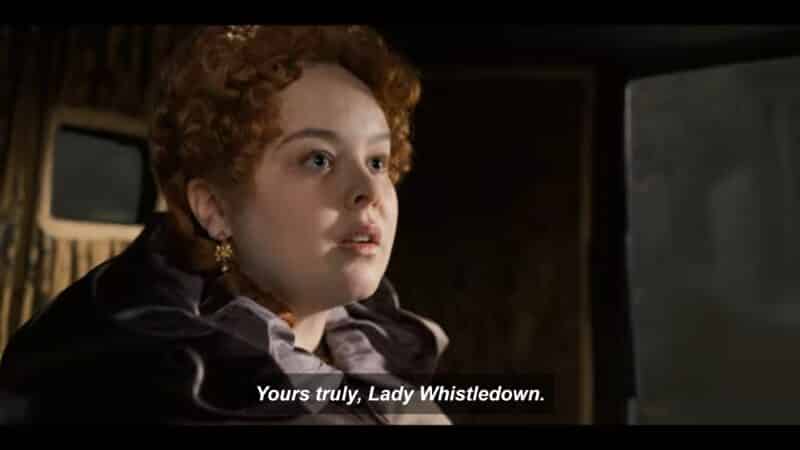 At nearly every party, the only person who saw her were family members, Eloise, and Colin. Outside of that, she was damn near a ghost. A friendly one, like Casper, but nonetheless not taken note of. And when you consider all she heard and commented on, it really pushes you to understand her frustrations with life and people. Mainly since it seems that Lady Whistledown was the closest thing to revenge Penelope could get on a society that made her seem unloved, unwanted, and often invisible.

Siena Looking Out For Herself - 83%

The finale of Bridgerton is a bit of a strange one. For while it sets up many things for a second season, a lot of what we're left with almost makes it seem like a series finale as Daphne has a child, Lady Whistledown has been revealed, and the only storylines that can continue featuring minor characters. Well, outside of seeing Simon as a father which, honestly, while not a terrible plot, can't carry an entire season.