Who Is More Easily Manipulated Than Those In A Vulnerable Position – Lady Portia, Penelope, Marina

Marina being so adamant Sir George will return for her from Spain, has made her very contentious. Mainly in terms of Lady Portia, to naturally save face, getting her a husband who can hopefully keep the family from experiencing a scandal. But, with Penelope there, Marina feels like she has some support, so Lady Portia has to go to a drastic decision.

What decision, you ask? Well, forging a letter from George making it seem all he wanted was to have sex with Marina, and her pregnancy is her problem.

When It Is No Longer A Game Anymore – Simon, Anthony, Daphne, Eloise

With her version of a wet dream happening, Daphne comes to realize it is no longer a ruse, an agreement, arrangement, whatever word they are using now – she has feelings for Simon. The problem with that is, he has made it quite clear marriage isn’t on his agenda. However, whether the banter and friendship could make Daphne an exception does come to mind. Thus leading Daphne to poke and prod from Anthony any information he is willing to give, and all he can present is Simon not being like them.

Take note, Simon grew up without a mother, had a terrible relationship with his father, and over the 20 years Anthony has known him, he has grown fond of being alone. Mind you, one could submit he had no other choice, but perhaps this only fueled Daphne to be a silver lining more.

It is becoming clear to many that there is something genuinely there, so Lady Danbury pushes Simon to make it official or get out of Daphne’s way. For truly, there is nothing crueler than to have her waste her time and youth on someone who sees her as a dalliance. So, despite his own feelings and starting Daphne’s sexual awakening, he cuts her off abruptly and rudely.

But, with being free from her feelings, it means Daphne can focus on Prince Friedrich, as the Queen wants, and the diamond of the season can be with the Prince of Prussia.

And speaking of shifting focus, Anthony has struggled with doing what he is obligated to do, in terms of getting married, just like his sister. The only difference is, their mother, Lady Violet, doesn’t have the same sway over him as she does Daphne. But, with being a viscount, it makes his love for Siena complicated. She has no dowry, no title, she is a talented opera singer, but he would be marrying beneath his position. Anthony knows that Siena knows that, but at one time, it seemed like it wouldn’t matter.

However, now Siena has experienced Anthony breaking his promise once, and like Daphne, she cares not to vie for someone who clearly doesn’t have her future in mind. So, be it flirting with Simon or whoever, she doesn’t plan to wait for any man, especially Anthony.

Wondering What Is The Age Difference Between Simon and Daphne

At first, a part of me loved that Simon was causing this sexual awakening, and demure Daphne was starting to explore how deep her feelings were becoming for Simon. However, then I found myself taking note that Simon is Anthony’s age, they have known each other for 20 years, and until Lady Danbury started to interact with Simon when he was 4, he was isolated. So, at a minimum, he is likely 24 years old.

Then with Daphne, most girls debut as a debutante at 16, so there is almost a 10-year difference between these two people, and I know, we’re in the 1800s, so there are different standards here. However, considering the show has talked about consent, presented some sense of feminism, and seems invested in being a progressive tone to the times, it’s interesting this age difference is avoided. 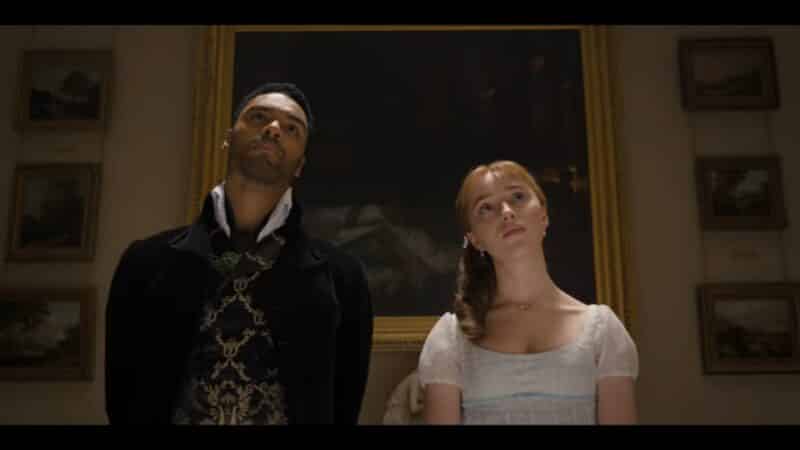 I mean, just look at Daphne. Yes, she might bleed and does have wit, but does she not come off like many girls in coming of age movies who get with an older man who seems almost like a predator? If not someone who, because they struggle with making connections with women their age, they rather grow close to a girl?

Did you find him interesting? I get he is supposed to be attractive but, where is the personality? Was the episode just supposed to push the fact that, especially in that age, marrying for love was a luxury that time rarely gave any woman the time to look for? So instead, between your parents, older siblings, family friends, you had to hope for the best?

With Eloise the only sister of Daphne who she really talks to, and the only sibling, outside of Anthony, with any notable voice, it makes you wish they dived into their relationship more. Especially since you can tell Daphne wants a better connection yet Eloise feels she can’t give nor get that from her. She’d rather read, write, speak to Penelope, or foster this relationship with her older brother, who still isn’t worth taking much note of.

Low-Level Investment In Most Of The Characters

Which may become a notable problem as time goes on. While many of the established characters continue to blossom, specifically our leads, the supporting characters haven’t done the same. No Featherington has really stepped up, despite more being said and done by Penelope and Marina. Daphne’s siblings remain relatively quiet or uninteresting, and as for everyone else? Eh.

The Queen remains powerful only by title, Lady Danbury will always remain a favorite, but her life is pretty much Simon’s affairs, does anyone else matter? Heck, are they made to matter?

Wondering What Is The Age Difference Between Simon and Daphne - 75%

Low-Level Investment In Most Of The Characters - 71%

The third episode will either be a stumble in a rather good series or a sign that the good time might be over, and it is all downhill from here.