Some of the awkwardness of episode 1 slips away as you realize Pete, while gay, is still Georgia made and Tiff has long left her conservative upbringing behind.

Pete, once again, chickens out of doing stand up. So, using her style of therapy, Tiff tries to help give Pete a way to calm down by bringing up sex and reminding him that inside of him is Chester. A man who was brave and is capable of doing the kind of work Tiff does. So what is stand up?

While Tiff is studious, for her degree more than anything, a classmate named Kate seems to see her as a threat. Probably because Professor Charles is a little too flirty and while he speaks of professional boundaries, it seems that only applies to clients – not students. For in his mind, he doesn’t support the Freud way of therapy, focusing on sex and roleplay, for it leads to unethical relationships with patients. An idea Tiff slight pushes back on because of her line of work and her thoughts on how it is therapy, especially for men.

However, making that argument is hard for her since while she isn’t ashamed of the work she does, she also doesn’t want to deal with the stigma.

If there is a question on how Tiff is living well in New York while Pete struggles, the answer is Ralph. From what it appears, Tiff is living in his home, and he is her client. One she abuses and in turn, she gets a free place to stay. Now, as for how Rolph affords the home and maybe what is spending cash for Tiff? No idea.

However, in some ways, Fred may become something similar for Pete. Since with Tiff as a middleman, she is arranging for extra money out of Freaky Fred. Someone who actually likes Pete, though not in a romantic way, since he thinks he is funny. Which is always nice to hear before you piss in someone’s mouth.

Pete May Have A Potential Boyfriend

While Pete has Tiff, she is a bit distant in some ways but never so distant to lose what might be her only friend in New York. So Josh is a bit of a godsend and also acts as a nice reminder that, as adorkable as Pete is, he is also sexually attractive. And while it isn’t like he is chubby or anything which, within the gay community, gets ostracized a bit, not everything needs to be a statement.

If anything, considering Pete may have seen penises but has never mentioned having a boyfriend, this could be his first love. Something that, for better or worse, could be quite a thing to watch. Especially if he picks up Josh’s humor.

Digging Into Tiff’s Take On Psychology 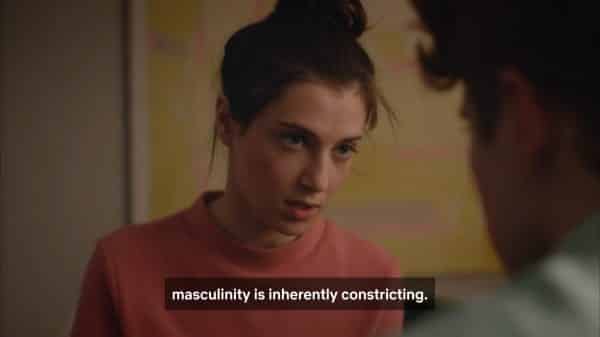 Digging Into Tiff’s Take On Psychology - 88%

While the long term potential of BONDiNG remains in the air, short term it is making for perhaps one of the best Netflix show’s in a while – primarily for it feels like it was written to be binged. Making it so you feel the need to go episode to episode quickly, few breaks, if any breaks, and find out what happens in the end.