Wherever I Look
Recaps, Reviews, and So Much More
Home TV Series Black Lightning: Season 2/ Episode 6 “The Book of Blood: Chapter Two: The Perdi” – Recap/ Review (with Spoilers)
TV Series

Black Lightning finally brings on a new villain, a faction war, and loads of action. Thus reminding you this isn’t strictly some metahuman family show.

What Happens To Gambi

Table of Contents show
1 What Happens To Gambi
2 What Happens To Khalil
3 What Happens To Anissa
4 What Happens To Lynn
5 Collected Quote(s) & .Gifs
6 Highlights
6.1 We Got A Villain Which Might Actually Be Interesting
6.2 Khalil and Jennifer Are Just Too Cute
6.3 Tobias v. Khalil
7 Low Point
7.1 Gambi
8 On The Fence
8.1 So, What We Going To Do About The Green Light Kids?
9 Follow Wherever I Look on Twitter, Like us on Facebook and Subscribe to the YouTube Channel.
9.1 Check Out Other TV Recaps 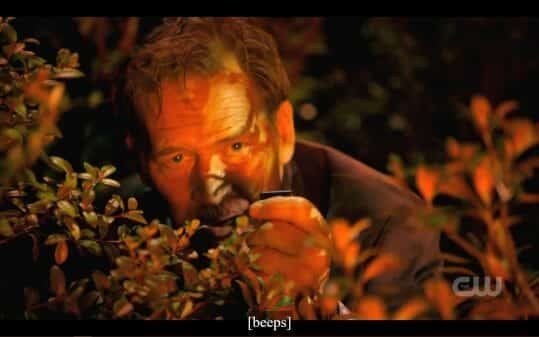 We come to find out Gambi is alive and he escaped his vehicle thanks to the passenger side floor being removable. Leading to him torturing the person who tried to kill him, and not getting much information in that process, and then just hiding out. At least until it is clear Anissa could use his help.

What Happens To Khalil

Khalil is seriously struggling with who he wants to be with Jennifer and who Tobias demands him to be. Which only gets more complicated by Jennifer showing she still has feelings for Khalil and maybe, in Khalil’s head, be open to friendship and something more. So, to maybe gain his freedom, and get revenge since he learns Tobias is the reason he got paralyzed, he tries to fight him. Problem is, Khalil is mad showy, like he is in an action movie, so Tobias whoops his ass.

Leading to him wanting Khalil to not only kill Reverand Holt, which Khalil didn’t do, but also his momma. For originally Tobias just wanted Holt out of the way so that clinic could be bought. Now he has learned being nice to Khalil doesn’t work so, like with Councilman Parker, he has to be the bad guy. Break him like you would a horse.

What Happens To Anissa

Anissa discovers in South Freeland there is a war going on. One which has taken place over 30 years and it is between this white woman known as Looker, who runs the Sange gang and then there is the Black Perdi gang. Now, when it comes to the Sange, they are composed of former addicts who Looker, using this silver liquid named element, enhances the abilities of her members at the cost of them becoming semi-slaves.

As for what the Perdi have? Well, organic food and shotguns. Yup, that’s about it. We don’t see them with super speed or strength so why Looker didn’t wipe them out a long time ago is anyone’s guess. However, with Anaya giving birth to twins – one which looks like a Sange child, so causes a major issue. For one, her father has a deep hatred for them. Though things aren’t made any better by the fact someone interested in Anaya, a Perdi, killed Deacon. Thus giving Looker all the reasons she needs for a war.

Something which, by all accounts, the Perdi are by no means ready for. Luckily, thanks to Anissa turning on a tracker, Jefferson finds her and helps the Perdi escape their compound. Well, some of the Perdi anyway. Many die and Anaya’s parents are missing. Them and Anaya’s Perdi looking baby vs. the Sange looking one.

Leaving Anaya worried and Jefferson, as Black Lightning, following a pool of element which is making its way back to Looker. All the while, Gambi watches from afar. Still investigating who was trying to kill him before he makes a grand return.

What Happens To Lynn After Dr. Jace kills 14 of green light kids, Lynn stands before their family and reveals what happened. This leads to major verbal backlash and one man being especially aggressive. I’m talking hitting Lynn’s car to get her attention and get an answer. What makes this situation worse though is Lynn is left with nothing but a bottle to console herself – and Jennifer. Someone who, on accident, kind of digs the knife a bit. Leaving Lynn worse for wear and drinking to the point of spending the night by the toilet.

We Got A Villain Which Might Actually Be Interesting

While Tobias has his moments, as noted countlessly, he has proven himself to not be good enough to be the main villain. He’s good enough for when one dies, like Lady Eve, and act as a segue – a placeholder, if you will. However, even when he had his crew, he didn’t have that certain oomph about him. Especially with his Uncle Ruckus with a degree talking behind.

Looker, on the other hand, she is a metahuman and has powers which are visual. Also, with her comes a whole gang, a new location for the show to explore, and a history. Add on she is part of the Blackest show you’ve ever seen and she could be racist and… you can already imagine the dialog and commentary which can come from this.

Khalil and Jennifer Are Just Too Cute Though the back and forth between teen characters can easily, and quickly, get annoying, there is just something about Khalil and Jennifer which makes their, “Will they or won’t they?” endearing in a way. Maybe it is because they more so stumbled than had major issues – setting aside Khalil nearly killing Jefferson. Also, call it bias if you want, you just not getting a whole lot of young love between two Black characters. Making it so you can’t help but root for them in a way and hope Khalil gets his life together.

Though, I must say, what I also appreciate is the show tries to balance things out between them. What I mean is, it isn’t like Jennifer can go to him to dump all her problems and there is no reciprocity. He can come to her when weak, vulnerable, frustrated, and unsure of what to do in life as well. Bolstering your desire to see them work things out because, how often do you see a semi-healthy relationship like this? Semi only because both are low-key hot messes as individuals.

While Khalil was being a bit extra, hence him getting flung around like a rag doll, you have to appreciate the choreography of his and Tobias’ fight scene. For while, in general, Tobias has top-notch hand to hand combat moments, something about the fight felt like a reminder. Like, yes, there is a new villain but don’t forget who has held this show down since the beginning.

They really couldn’t have waited a few episodes for him to return?

So, What We Going To Do About The Green Light Kids?

There are 14 some odd kids from nearly 30 years ago who are alive and should be recovering. We met one man they were related to who was flipping out so it seems safe to say not all will be treated as monsters. With that said, what will be done with them? The show has been dragging its feet on getting them out of the pods and with them getting a serum to heal them, things should be good now right? We should see if that serum just made it so they can live in a normal world or maybe that and took away their powers.