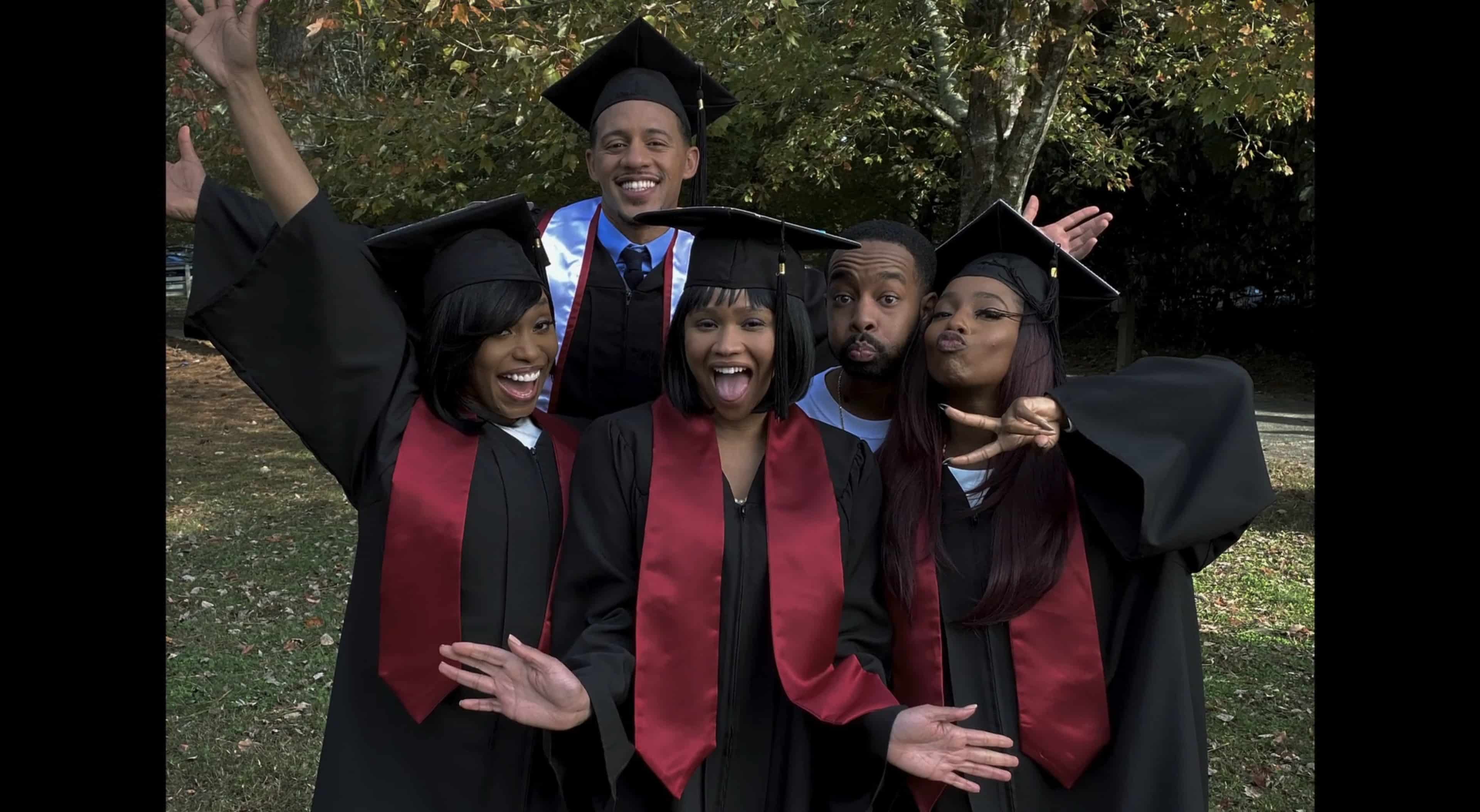 Veronica, Deon, Layne, and Tracey in their caps and gowns - with Vince also in the picture

How Layne, Deon, Veronica, and Tracey ended up where they are now, began almost ten years ago, and this episode revisits the moments that changed their lives.

Deon’s college girlfriend, Cozi, is not loved by the group at all. This is especially true for Layne since she always comes for her. Mind you, Deon thoroughly friend zones Layne at this time and repeatedly calls her “sis.” Yet, even when Layne gets Cozi a dress for her birthday, the jabs keep coming, and Layne takes it on the chin while Deon just awkward walks away with her – apologizing on occasion.

This Life Isn’t For Me – Veronica, Tracey, Aaron, Layne

Despite past insecurities, Veronica tried to be a model after college, and it didn’t go well. As for Tracey? Well, she has the opportunity to interview for Will Packer but passed that up for a date with Aaron. In terms of Layne? Honestly, while good at her job, she didn’t like the culture, and with it being pushed, she was cultivated to be the beloved Black person due to her skin tone, hair, and temperament? Even if it was an underhanded compliment, Cozi noting Layne’s taste for clothes is what seemingly sparked Layne believing she had options.

So, while we know Cozi is what changed Layne’s life, it’s also her being stuck up that made Deon and Layne a possibility. Mind you, Layne claims she was dating some dude at the time, but he was in DC, rarely around, so their relationship was stretched thin. Not to imply either one cheated on their partner at the time, but a very drunk Deon had a moment where an accident could have happened.

However, instead, he hands a lot of compliments that go beyond your usual, “You look good, sis.” Thus reminding us that his Layne and Deon thing has been going on forever.

But as for Veronica and Tracey? An opportunity to date a ballplayer was more important than her potential career was, and paying her dues? It was never really something she desired. And Veronica? Well, with a gig that had her handing out drinks and men saying they wanted to taste her nectar, seeing a Black woman not be called a queen but the person who ran a town when it came to real estate? That’s all she needed to see to understand she was in the wrong line of work.

Some Background On What Has Happened Thus Far

“No Hands” is good for background information, though not necessarily much more. Yet, considering we get to learn Tracey had the chance to work for Will Packer just before he blew up with “Think Like A Man” and was single, and Veronica switched from modeling to real estate, all due to representation? It gives you just enough to appreciate the episode.

Add in seeing what began Layne’s shift from the woman her mother envisioned her to be versus Layne becoming her own person? While a lot of this could have been flashbacks sprinkled throughout future episodes, perhaps it is best it was covered now so we can move steadily forward?

Some Background On What Has Happened Thus Far - 82%

A flashback episode full of tidbits that may not offer much but can still be considered a treat to committed viewers.