Deon and Layne explore what a relationship could look like as things with Layne’s business neighbor inspires Liberty to give her a nickname.

Vince is still dealing with a learning curve so that he can be seen as not only a legitimate DJ but one who deserves bookings. Leading to Tracey giving him another social media 101 class, and you coming to the point of wondering if Deon and Layne are the only ones who have chemistry beyond friendship? But, whatever could happen between them may be explored later for Vince finally gets his shot!

Granted, he has to give his boss, Terry, 20% of his tips, an obscene number by industry standards, but it is enough to get him to spin during a night gig. Problem is though, when rapper Lil Baby shows up, while he likes the old school jams, Vince being unable to play his music, due to Lil Baby offering a flash drive, messes up the night and pisses Terry off.

After getting deep in the last episode, Deon and Layne are unsure how to move forward. Both want to get hot and heavy, but at the same time, don’t want things to become weird between them. So, it is agreed they will date and take things slow. However, one problem for both is they are nasty, and the friendship base allows them a certain level of comfort. The kind most people who just started dating don’t have. Add in the allure of things being a secret, and it makes waiting to have sex a bit difficult.

Willy is still living outside of Layne’s store, and being that Kristi wants to change the culture to what she is comfortable with, not adapt to what it is, she has a petition circulating and tries to have a conversation with Willy. But, like Layne, he ignores her and her ways. However, Layne and Willy’s way of handling Kristi can be considered kind compared to Liberty. At this point, Liberty is tired of Kristi, and while she won’t punch her in the face, when she intrudes and complains about an event Liberty had a hand in, she decides to make her feelings known and dubs Kristi “Yoga Bitch.”

That for Kristi is the last straw and since being her version of nice, or playing a victim, didn’t work, she does what certain people always do when they can’t get their way: She calls the cops. Thus Willy gets arrested for charges yet to be announced.

Sleep has gotten me out of arguments, sex, breakups, and whatever this is.
— Layne

When you can’t afford a therapist, the internet will do just fine.
— Layne

Kristi Getting Called Out

Sometimes, shows aren’t about being entertaining but allowing you to live vicariously. It’s about the opportunity to have someone else say what you can’t due to the issues which would follow. And with Liberty handling things, we didn’t get Layne tripping over herself trying to make things polite, we got something raw. Also, if I may say, between Liberty eloquently going off and revealing she is bi, they need to stop playing and properly bring her into the crew. Even if it means some awkwardness addressing the way she is.

Anyone Else Ship Tracey and Vince?

All I’m saying is, while all friends don’t need to become couples, Tracey and Vince have something there. Now, it could just be that Vince feels a bit vulnerable since things aren’t going right, and he sees Tracey as a guru. That could be where this chemistry is coming from. However, considering Veronica doesn’t want to be monogamous right now, and Tracey seems to enjoy Vince’s company, maybe something could happen. Though, if they firmly established the friendship is brother/sister close, that would be cool too.

Layne & Deon Are Nasty In The Best Ways

After all, we got Layne and Deon, who are just nasty in ways that make you feel blessed. That dinner scene, especially, with them talking about having the other end up on top of the table, that’s the kind of foreplay I like to see. Kudos to Igbokwe for how Layne and Deon’s whole situation is written. Specifically in terms of non-physical intimacy being just as important as them making out and nearly having sex.

Veronica Not Being Above Doing It Herself

What you have to appreciate about Veronica is as much as she comes off bougie, it’s because she operates on the concept of when you know better you do better. She knows most men in the area aren’t s***, so she plays them as they would like to play her. When it comes to realty and construction, while it is a lot of work, she’d rather do it herself than deal with marked-up prices. Which is why you have to respect her. Her air and graces simply stem from her working hard and deserving to be as fabulous as she wants to be.

I don’t think being homeless, or someone with PTSD, especially for veterans, is noted enough – particularly outside indie movies. Add in Willy being Black, and it feels like, as much as you know the show isn’t about him, Bigger expands being the idea that the title is about big penises and is more so about there being a bigger world than what each character focuses on. 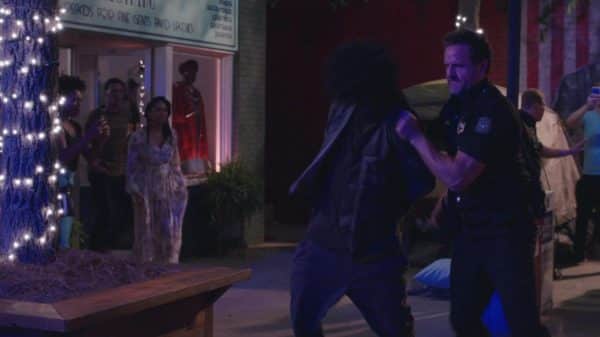 For Vince, there is a bigger world than his old school way of thinking, and he has to break out of that. Tracey is dealing with breaking out of her reality tv past and seeking something bigger than that and for Veronica? Taking note of how things were for her in college, her journey seems to be about expecting better and dreaming bigger. Hence her success and the success Deon is dreaming of.

And while I know for Layne the idea of bigger, at first, dealt with a penis, it too has expanded to dreaming bigger, in terms of owning her own store, expecting more, in terms of her relationships, and knowing her value. Be it as a friend to people like Willy, if not advocate, or someone who accepts people whether they are weird and aggressive like Liberty, or respectable, in their own way, like her friends.

Veronica Not Being Above Doing It Herself - 85%

Anyone Else Ship Tracey and Vince? - 83%

Kristi Getting Called Out - 84%