Wherever I Look
Recaps, Reviews, and So Much More
Home TV Series Atypical: Season 2/ Episode 8 “Living At An Angle” – Recap/ Review (with Spoilers)
TV Series

As everyone freaks Sam out about college, Elsa meets Megan – who is making moves on Doug.

What’s Yours Is Mine & Mine’s Is Yours: Doug, Elsa, Megan

The planning for the training courses really bring Doug and Elsa together but there remains that affair which makes things complicated. Yet, when tested by Megan, who just does some light flirting, Doug doesn’t take the bait. Instead, he doubles down with Elsa by talking couples therapy and with her joining him in the shower, it seems they are on their way back to finding stability.

Also, Elsa is getting around to opening a hair cutting business for kids with autism.

I wonder what was it that made Doug decide he officially had enough time to heal and is ready to move on. Was it just Megan dressing up for him, touching his hand, and presenting the idea he has options? Taking note of how the parents and Casey are connected to Sam’s story, could it just have been the fear of the unknown so he went back to Elsa? Just because it was safe and familiar territory?

Things to think about.

The first school Sam commits to is a arts school in Rhode Island. However, between group, Casey, Evan, and Elsa, he gets really freaked out about the idea. Also, it doesn’t help Amber tried to fix the situation by taking Sam’s portfolio so he couldn’t get in. Luckily, Ms. Whitaker finds a school closer to home to help ease Sam’s anxiety. And, while all this happens, Casey is dealing with failing biology and wondering if she should just let herself fail to get kicked out of Clayton. For with Izzie and the girls no longer close to her, she is back to where she started but with a handle on the convenience card system. 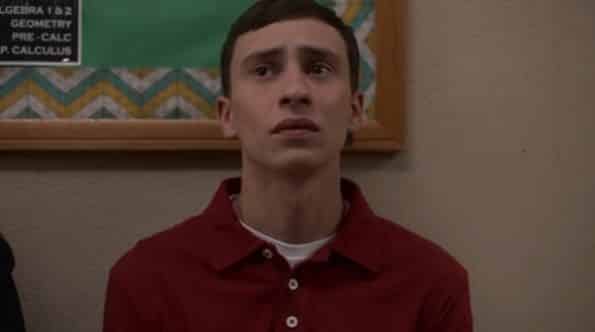 This is kind of an uneventful episode in a way. I mean, it wraps things up in terms of where Doug’s head was at with his marriage, Elsa with her business, and Sam with school. But the Bailey and Paige thing got put to the side, Zahid applying to nursing school, a resolution to Casey’s multiple problems, and us still not getting much out of Sam’s support group.

Which I don’t know how to take really. On one hand, showing Amber, Lily, and the rest is a good thing. Yet, Amber is just given a bunch of one-liners, Lily gets a handful of lines, and the others? Well, it just seems like they were added in to address controversy sometimes. Not all the time, but there is this vibe they recognized they may get called out for using a person without autism as the lead, but thought Sam’s portrayal being so heartfelt would make up for it. But when they got called out, they found actors and figured a way to fit them into the story, but didn’t make it so each character had a full-on story. Even became a legit friend to Sam so they could have an arc of sorts.

But maybe I’m just looking for problems where there aren’t really any. It’s just, in my mind, the inclusion of other people with autism comes off like season 2 of Thirteen Reasons Why having PSA about suicide, depression and all that. Is it because the creators, much less Netflix, really care or because they want one less thing to be criticized on or to distract from all the work they put in?

[…] sometimes I feel like we focus so much on what’s difficult that we forget to celebrate our accomplishments.
— Ms. Whitaker