As Sam gets taken advantage of, he makes a new friend. While Casey may lose her boyfriend and Elsa? Well, things get a smidge better for her.

Back In The Home: Elsa, Megan, Doug, Casey

In case you were worried about Doug, you kind of don’t have to be. All he had was a panic attack. Something which he grew up on since his dad would have them once a month. But, with panic attacks being a heart attack scare, even Casey would rather Elsa stay a bit than Doug continue to run himself ragged.

Add in his new friend Megan talks about how she isolated her kids from their father, who was a piece of work, and kind of regrets it now, and he full on reneges. Not to the point of going to marriage counseling, and all that, but them being roommates. So that he can have more peace of mind.

With Doug not desiring counseling, and talking about there are roommates until they graduate, that’s a red flag. On top of the comment about them being too broken. Which leads to the question of what will Elsa do next? She recognizes she wasn’t the best partner, as a wife, and neglected Doug, but her holding herself accountable hasn’t changed anything. So could Doug possibly be ready to move on or is he still in a state of just trying to deal with being cheated on?

Because, while Megan isn’t pushing up on Doug at all, even trying to give him advice, you never know.

With Izzie and Casey close, and Nate a weirdo, it is only natural that they want to see Casey’s life a bit. Hence the whole track team, plus Nate, going to Casey’s favorite pizza shop. Which Evan gets invited to go to and it is awkward. Mostly because Casey seems a bit embarrassed of Evan going to technical school. Though, Evan’s insecurities don’t end there. Despite knowing Izzie and Nate go together, him being very familiar with Casey throws him off as well. Leading to him and Casey fighting to the point of leaving her at the pizza spot and having to get a ride home.

I knew Nate would be trouble, but let’s not let Casey or Evan off the hook either. With Casey, besides the whole need to reassure her friends Evan is smart, I think she should have prepped him more. Nate is a character and their relationship would make a lot of guys uncomfortable. After all, he has money, Casey hasn’t really been spending much time with Evan, and he is trying to make an effort so they can spend time together. Even if he knew, before the meeting, he’d be comfortable.

With that said, I do think Evan was being hella petty by coercing Casey to find another ride. I mean, who does that? Much less, as embarrassed as you feel, imagine how embarrassed she’ll be that her boyfriend decided to force her to ask one of her friends for a ride. Leading to a bunch of questions about their relationship I’m sure she won’t have the answers for.

After Amber makes Sam feel bad about not having a bank account, he decides to ask Elsa to stop managing his money and Doug, of course, supports it. While, as with the therapy thing, Elsa is on the other side of the disagreement. Making it so Sam is in control of $7,000 that have been saved up. Of which he gets conned out of $700 thanks to a kid named Arlo who planned to have a house party.

Jokes on him though since Sam didn’t know it was supposed to be secret and so he tells Elsa, Elsa talks to Arlo’s mom, and the party gets shut down. Leading to Arlo being an ass about it and cracking Sam’s phone screen. Making his ability to see a baby penguin break out its egg messed up.

That is, until Bailey, the girl usually in the same closet Sam hides in, shares her phone screen so he can watch and wait. 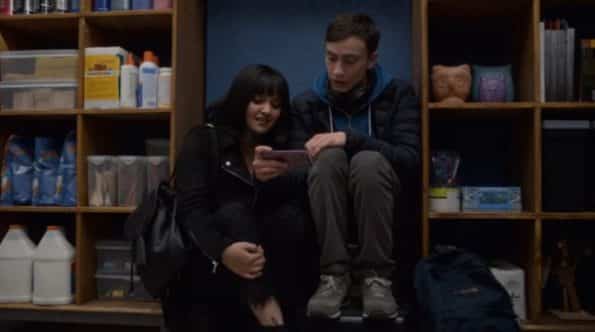 The main reason for bringing up Bailey is because, similar to Megan with Doug, there is a need to question what can come of that? For like Doug’s situation with Elsa, the relationship is rocky to the point you don’t know if it can truly be repaired. Things have been done and said which makes it seem, with time, friendship could be possible. However, things going back to being as cute as they were? It seems less likely by the day to the point you are wondering if Sam and Doug are better off moving on.

Yet, it isn’t clear with the new women in their lives are just seeking friendships, willing to give advice, or something more? But, it should be interesting to see how Paige reacts to Bailey, assuming she does interact with Sam more. On top of that, since Arlo publicly broke Sam’s phone, I do wonder if Paige may flip out and go penguin killer on him. ESPECIALLY once she hears Arlo scammed Sam out of $700.