Anne With An E: Season 3, Episode 3 “What Can Stop The Determined Heart” – Recap, Review (with Spoilers)

Devastating news comes to Avonlea but, luckily, the community comes together to help ease the pain. If just for a day or two.

Being that Mary is used to the Bog, and the sense of community which came from everyone being poor, it makes many of the neighbors not wanting to come by and her having no reason to make huge meals a bit hard to deal with. Yet, what you expect when even the children, like Josie, are prejudice? If not, in the case of Rachel, ignorant and so afraid of those that are different, that when trying to speak to Ka’kwet and her parents about a re-education boarding school, she can’t bring herself to get close to them.

Which, by the way, being that they aren’t too sure about the idea, Ka’kwet’s parents are mixed about whether it will ultimately benefit their daughter or not. Though considering Canada’s, if not North American countries, and their relationships with the indigenous, we know well they have reasons to worry.

Due to Mary not feeling well, Gilbert has been making oatmeal, since neither he nor Bash really know how to cook, it makes getting a doctor a pressing matter. Leading to Dr. Ward diagnosing Mary with Sepsis, a blood disease, and with the medications to treat it either not existing yet, or just unknown to Dr. Ward, she is given a death sentence of one or two weeks.

This news is hard for Gilbert to deliver to Mary, but he does it. Leading to him wondering if he has it in him to become a doctor for doing this as part of his career seems to be a bit much for him. Yet, Anne tries to remind him that it is his heart which makes him the best one to deliver such news. Much less, with knowing loss, having empathy, it will make him a better doctor.

But, even with Anne’s encouraging words, that doesn’t take away the cloud this brings over Gilbert’s head. This is why, as Sebastian preps mentally and emotionally for loss, Gilbert handles trying to find Elijah. A task he fails in, since Elijah assumes Gilbert is trying to bring him to justice, so in the Bog, ignorant of the truth, Elijah remains.

However, while Elijah hides away, everyone else is hands-on. Even Matthew, who knows very little about children, helps with Delphine, with a few lessons from Jerry. As for Marilla? Well, she makes some food for Mary to eat, which Anne spices up, and brings about a brave face. 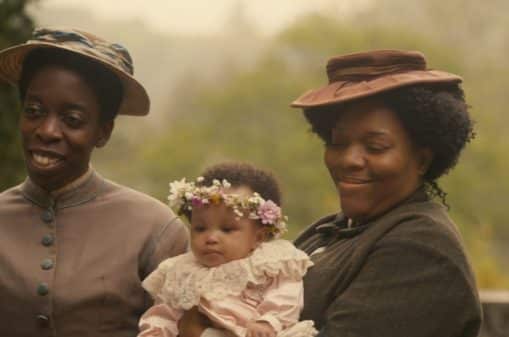 It should be noted, Mary doesn’t seem to die this episode, but it does make for a good send-off. Anne, for example, speaks to Diana’s family about hosting Easter in their garden, writes all of Mary’s recipes, such as the ones she was taught by her, and preps to take Delphine under her wing. After all, they are now kindred in a surprising way. Also, she advises Mary what to leave behind so Delphine has a piece of her and notes how she, despite her upbringing, is this bright child who brings light to any room she enters.

As for what she advises? For Mary to write a letter. One that is difficult to write, for it isn’t like Mary is an old woman writing her memoirs. What does a 20 or 30 something-year-old write a child? Heck, for those left behind, like Bash, how do they decide when the right time is for a child to learn of their mother’s last words? Well, while that isn’t clear, Mary does make it clear she wants Delphine to have an education and Bash to take out any obstacle that gets in her way.

Luckily, in that venture, and raising Delphine, he won’t be alone. Jocelyn and Constance, Mary’s laundry sisters, they are invited by Gilbert, while he was in the Bog, to come over, and they get to cooking, crying, getting to know Delphine, and even the folks of Avonlea a bit. Well, mostly Rachel, who still is a bit uncomfortable around negroes. However, she is warming up to them.

In fact, between her, Marilla, Matthew, Anne, and even Diana, when Diana’s parents’ host Mary and her family, extended or blood, for Easter, there are no incidence. Well, outside of Minnie May saying Delphine looks like a chocolate sweet, but that is handled with respect to the fact Minnie May is a child. Leaving us with Mary reciting a prayer, and everyone joining in, and us being left with the idea this might be one of the final times we’ll see this character.

Sometimes life hides gifts in the darkest of places.
— Anne

While The Show Is Progressive, It Doesn’t Pretend Prejudice Didn’t Exist

On Anne With An E, we have met Black people, those part of the LGBT community, both young and old, and this season introduced Indigenous nations. With such diversity, one could see the show as progressive, and perhaps with an agenda. Yet, with the reminders we receive from the prejudice, or plain ignorance, from Marilla, in season 2, or the continued actions of Rachel, we’re reminded that as much as there is a sense of diversity, it isn’t without addressing the truth.

Heck, just look at the children. From Josie to Billy, we see how prejudice is passed down and the importance of someone speaking out against it. For even with little to no exposure to natives or Black people, the children don’t even give the people a chance to prove stereotypes wrong. They are prejudged, poorly treated, and they take any negative response as proving their preconceived notions. Which, while a frustrating thing to watch, brings truth that is necessary.

Characters dying on any show always create a reaction that leaves you torn. In Mary’s case, her passing is something that is coming out of nowhere since it isn’t made clear what caused her disease. Yet, we have had to expect someone to die on this show for a long time. Aunt Josephine, Marilla, and Matthew aren’t getting any younger. Jerry could have been killed when assaulted, and taking note Gilbert is at odds with Billy, who is to say they couldn’t fight one day, one falls the wrong way, and dies?

All things considered, Mary’s death almost feels like a mercy killing for while she is part of the show, she is new so the pain of her loss, while real, and certainly not less than, is more manageable. Though don’t get me wrong, the setup still deserves a side-eye. For as much as Anne having a child who sort of gets her story could bolster her need to search for her parents, at the same time someone being written to die for her benefit is a little bit irritating. Never mind, considering the show is diverse, but with limited speaking parts for non-white characters, losing one stings a bit.

Gilbert Further Realizing What It Means To Be A Doctor

You have to appreciate Gilbert being shown what he’ll have to deal with if or when he becomes a doctor. It continues to provide him a story outside of Anne, and reminds you he is more than a love interest in waiting. Gilbert is someone with a life of his own he is planning and his own challenges in finding a stable adulthood. One that, if he is lucky, will have people like Anne or Winnie to bolster him, but also may not. So he will need to learn now what he can and can’t do, and to understand who is more than a friend, but like family, or his community, to see him through – as Mary said.

The Miseducation of Native Peoples

Ka’kwet returns! But now is posed with the possibility of going to a boarding school and Anne making school seem like a good idea and dealing with the guilt it won’t be for her… That’s going to be fun to watch. At least if Anne with an E is honest about it. Since, considering how they would cut the native people’s hair, especially if they were boys, abuse them, attempt to indoctrinate them, and separate them from their families, this could be hell to watch.

Yet, as noted when we first met Ka’kwet, being that so few shows feature indigenous people, never mind talk about their history, this is a big deal. Plus, there is something about Tarbell that makes you want to see her challenged and take on more. Hopefully to the point of her being cast for additional things and opening doors for more girls like her, and for indigenous people in general.

Anne With An E Directory

The Miseducation of Native Peoples - 85%

Gilbert Further Realizing What It Means To Be A Doctor - 81%

While The Show Is Progressive, It Doesn’t Pretend Prejudice Didn’t Exist - 86%

Hi, can u please tell which bible passage they read in this chapter during Mary’s surprise party? Thanks, Elizabeth

All I can find is that it is the Prayer of St. Francis, so I believe it isn’t a bible passage or verse.

i cried so hard during this episode

Thank you for this insightful review, I really enjoyed reading it. I so loved reading Anne’s story through the book series when I was younger and this t.v. adaptation with the new storylines is so wonderful. I am grateful for the storylines which portray all aspects of what society was like in early Canada, including a diversity of people and what prejudice looked like at that time.

I really liked Mary’s character and it is too bad she is no longer there.